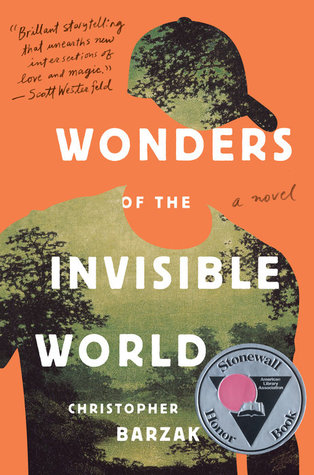 Wonders of the Invisible World by Christopher Barzak

Wonders of the Invisible World was recommended to me by a friend, who said she read it in one sitting and absolutely loved it. I took the rec knowing her particular suggestions to me are usually either hit or miss. I either love them to bits or can’t even finish them. This is the first time I think I’ve read a book recommended by her where it landed somewhere in the middle.

This book is set in modern day and follows a teenage boy who feels he has no idea who he is or what his life is about. He walks around in a fog, wondering when his life left him in the dust. When a friend from his childhood reappears, it triggers a series of events that slowly reveal that his life was actually as distant and detached as he thought it was, and that someone was making it that way on purpose. I’ll stop the synopsis there, only saying in addition that this book has both magical realism and LGBT themes, which is a combination I personally haven’t read before.

First and foremost, I feel like this book tried to be a mystery and couldn’t quite get there. There were a couple twists that I predicted early on and when they happened exactly how I thought they would, it was a bit of a yawn. This book didn’t surprise me at all, despite the supernatural elements mentioned that could have been used to do so. The characters as well I felt were a bit lacking. The main character Aiden, that one who’s always complaining about not knowing who he is or what his personality is, really conveyed that. I had no clue what this kid’s personality was. He was pretty damn flat. So… is that good characterization because he knew he was flat or was it bad? Haven’t the foggiest, but as a result I couldn’t relate or sympathize to him very well, which was probably a contributing factor why the twists did nothing for me.

The plot itself was interesting if a bit slow-moving. This was probably my favorite part of the book, regardless of the untwisty twists. Aiden’s memory and personality are in a fog and he starts hearing and seeing things that no one else can. The tree in his back yard starts speaking to him, he witnesses his great grandfather fighting in WW2, and all of it connects to why he’s such a bore, I mean why he’s so confused with himself. As the plot unraveled, I did start to feel something for the characters. Not the main characters, but his mother and his romantic interest. Both of them stood out to me more than Aiden did unfortunately. I ended up really disliking one and liking the other but at least I felt something towards them.

The thing I think this book handled the best was the romance. It wasn’t really.. romantic, I guess, but it felt real, natural. In every LGBT book I’ve read, there’s always some big confrontation before the characters relationship can get started: some realization, some fight with family, something that says ‘this is out of the norm and this book is gonna milk it’. But this book, the relationship just kinda… happened. There wasn’t any fighting from parents, there wasn’t any disowning, there wasn’t any ideological monologue as the main character realized he had feelings for another man… he just accepted it and rolled with it, as did his boyfriend and his family. It was a nice to see an LGBT relationship not put on a pedestal or highlighted as different or bad – it just popped in there like any other relationship would and both characters actually handled it in a mature manner (gasp, no drama!)

So overall, with the pros and cons mentioned above, I liked this book. Didn’t love it, but liked it well enough. So it gets a decent rating from me.

One thought on “Book Review: Wonders of the Invisible World by Christopher Barzak”