(I’ve decided to change the review titles from ‘yapping’ to ‘blabber’, just because that’s the catch-phrase of my blog as is. So there. :P)

-Spoilery blabbing-
Dun read unless you’ve read the book or don’t care about being spoiled out your ass.

I started this book this morning around 4am and stopped only for about 30 minutes at 7:30am so I could drive to work, where I promptly started reading again because it was dead as hell. It’s now 1:30pm and I’ve just finished this thing.

I don’t think I’ve ever read a complete series so quickly before. I started The Grisha trilogy on Jan 5th. The first two books took me two days each to read, then I read a different book for a day while I waited for this one to arrive in the mail, then I buzzed through this one in about 9 hours. I feel like the speed at which I read these makes my opinions on them different than they would be if I would have taken them slower, but who knows.

This third book, the final in the series, was a very bittersweet read for me. Overall, I really liked it, but it left me feeling bleak, I guess. The story picks up in the caves where the characters had escaped to at the end of the second book – the setting stayed there for a few chapters or so while Alina got worse under the Apparat’s care. Honestly at this point in the book, I was under the impression that Alina’s powers were gone, kaput, nada. I reasoned this much from her saying just that at the end of the second book. But hey, low and behold, it was just because she was out of direct sunlight. Which in itself is fine, but she seemed to know as much – she actively sought sunlight so she could use her summoning abilities again. It just confused me – why have her state her powers were gone if she knew that weren’t? Not a huge deal, but I feel it was unnecessary. 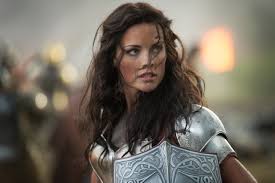 The book itself has a bit of a slow pace during the cave scenes but picks up fairly quickly
once they escape from it. One of my favorite parts
about this book is the character development, particularly Zoya’s. In book one (and part of two) she was a very one-dimensional stereotypical mean girl. She still kinda holds onto that persona, but at the same time, we get to see a bit more into her personality and sense of humor, which was a refreshing change. I keep picturing Jaimie Alexander, who played Sif in Thor, in my mind as I read for her, too. So she’s totally and completely cast in my mind and any other choice if they make a movie or tv show will pale in comparison, hawhaw.

But anyways, the meat of the book: The ending. I both loved and hated the ending. When I was reading and when Mal was killed, I got upset. And then when the Darkling was killed I got really upset. Like, that almost ruined the book for me – Alina sitting in the sand with the two deadies on either side of her. Like really. It would have been awful to end it that way. But Mal ended up living, which saved the book for me. If she would have ended up alone and mourning both of them, I feel like I would have cast this book away and never looked back.

But Mal lived and Alina is happy. And Nikolai lived as well, though I feel like I wanted to read more about him.

But the Darkling man, the Darkling. WHY did he have to die. I feel like his death is what caused this book to bump down to a four star rating for me. Until that point, it had been a solid 5 stars easy. There were so many ways he could have lived and the plot would still make sense. But ugh man. Ugh. I’m so mad about that. Honestly it’s mostly because I’m team Darklina all the way. (I fully understand that he’s awful and in no way suitable, but like I said since the first book, I was fascinated and was rooting for him hahah). So now I need to go find my non-canonical fanfiction and just stew in there for a bit, thank you. But even with my ship not happening aside, the character still could have lived. Buh. BUH.

Happy-sad-frustrated ending to the book. It was a really good ending – a really solid ending and honestly probably the most logical one for all the plotlines that had been set up and needed completed. It was good. But it wasn’t what I wanted. 😛

4 thoughts on “Ruin and Rising by Leigh Bardugo | Blabber”