Happy Easter!! 😀 I hope everyone has a lovely day today. Today I’m posting the last of my ‘possible picks’ things for r/Fantasy’s 2017 Bingo Sheet. For the reddit announcement page, click here. And here are also my posts on: my original announcement post, first row, second row, third row and fourth row picks.

Onto the fifth and final one now.

Quick reminder as to what the sheet looks like: 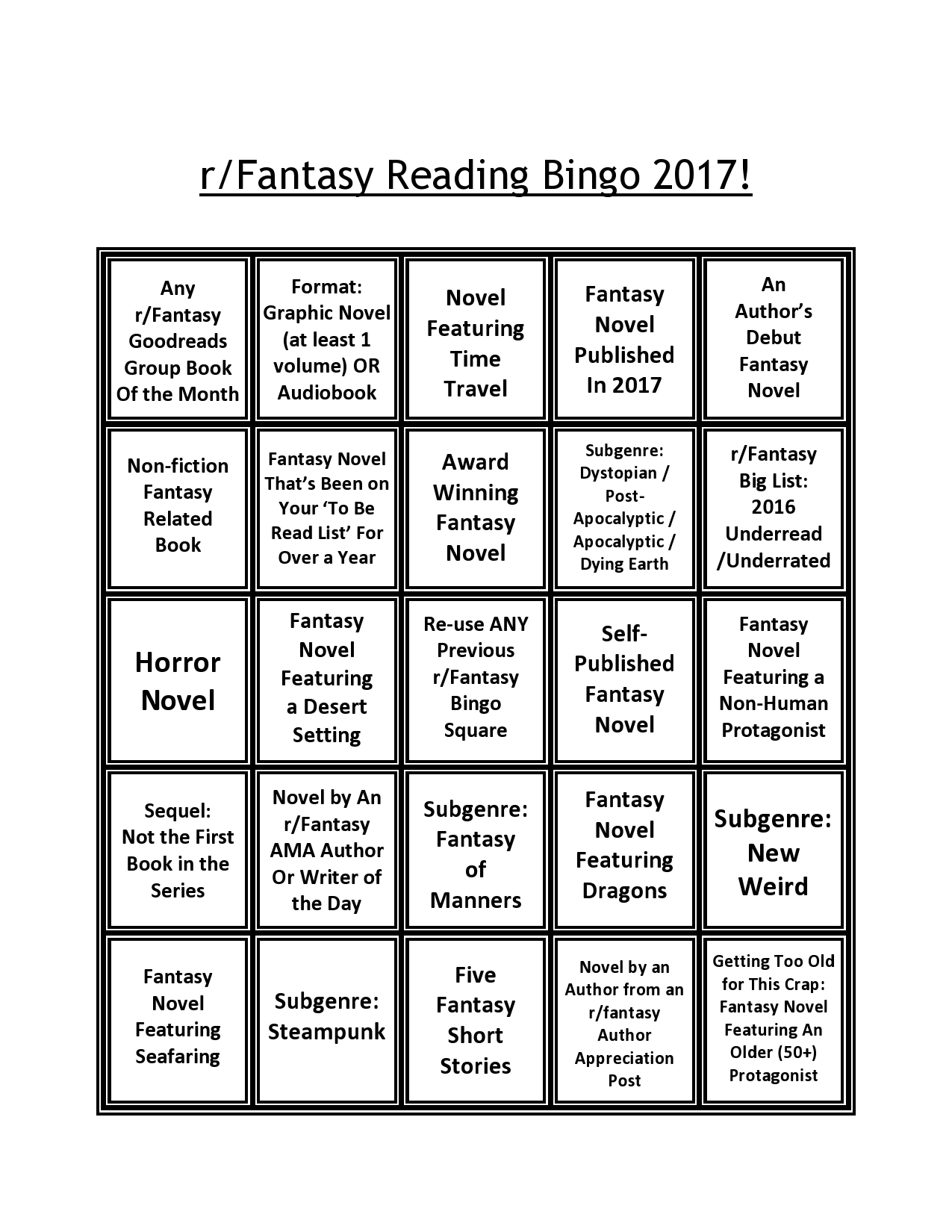 I’m thinking either continuing with Robin Hobb’s series and sticking Mad Ship or Ship of Destiny in here. Another possibility could be At the Edge of the World by Kevin J Anderson. Considering Hobb’s books could fit into other categories, I must just go with the Anderson one.

The only ‘steampunk’ books I think I own that I haven’t read yet are the first two books in the Parasol Protectorate series… I’ve listed Soulless for another category already, so maybe Changeless for this one? I don’t know. I might pick up a book or two in the meantime for this series – not even the rec thread is helping me out for this one, haha.

Also, if any of you need a book for this category, read Scar Night by Alan Campbell. I’ve already read it or I would’ve just picked that one, haha.

I’m gonna have to scour the internet for this one. I’m sure I’ll find some. If anyone knows of any websites hosting short fiction, do tell me. I’m rather unaware of stuff like this.

This is likely going to be a square that I’ll have to buy or borrow a book for. This list of qualifying authors is here and honestly I don’t have a single book by any of them, haha. So much for being prepared, Emily. If any of the authors are ones you recognize, shoot me a suggestion, would ya?

There are two I could read for this one, though one of those is technically sci-fi and not fantasy… but whatevs. That would be Old Man’s War by John Scalzi. The other, most fantasy-ish choice is The Buried Giant by Kazuo Ishiguro. I’m leaning towards picking up the latter over the former, just because it’s more fantasy than the first. But we’ll see.

OKAY THAT’S IT. I MADE A TBR FOR ALL TWENTY-FIVE SQUARES, DAMMIT. NOW I JUST GOTTA READ THE BLASTED THINGS.