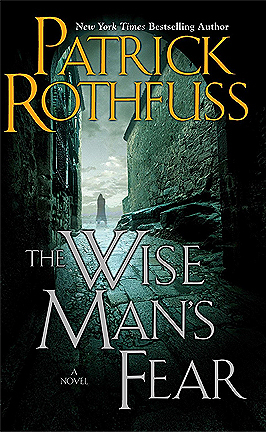 I’m so torn over this book.

I’ve never gone back and forth between ‘I hate this’ and ‘I like this’ so often while reading something before. There are parts of this book that I absolutely loathed. Other parts I found pretty decent. At no point was I ‘loving it’ but there are definitely parts that somewhat redeem that awfulness that was the middle of this book.

I warn you now, this is going to go into detail about events and character development. Major spoilers ahead.

Reading The Wise Man’s Fear is like eating a jelly donut full of peanuts. You get the smooth, lovely donut – the setting – but then every second chew, you hit your poor little tooth on a peanut – Kvothe – as he performs yet another completely ridiculous act. It throws off the jive of the donut. It makes you less likely to enjoy the soft, chewy gooyiness of the donut because you constantly hit little Kvothe-peanuts and get them stuck in your teeth.

That being said, I really really like the world this book it set in. The overall plot points are really good, the side characters are great, the lore is awesome. If it wasn’t for the main character, this book would seriously be a 5-star read for me.

But Kvothe just has to put his foot in everything, doesn’t he. He’s magically good at everything, including getting on my nerves.

So to celebrate Kvothe being Kvothe, I bring you the following:

The (mostly) comprehensive list of things that Kvothe is ridiculously, unbelievably good at:

I feel like I can’t write this list anymore. It’s making me too irritated, haha. Along with Kvothe’s amazing feats there were a handful of situations he found himself in that magically solved themselves because he’s just so good at what he does, which is everything. He was taught to fight a secret fighting style that nobody outside the culture is to know. Totally was accepted into the group. Repeatedly bullied and was bullied by a rival. Neither one of them permanently harmed. Had to learn a new language. Did it in two weeks. Went out to kill five men, totally killed 20-something without issue. The list goes on.

So, shortly after deciding that there was no redeeming this guy, I went on the internet to see if I was alone in feeling this way. Luckily, I’m not, but I did read some interesting theories regarding his blatant Mary-Sue-ness:

1. Kvothe is a badly-written Mary Sue. This is one theory. This is the one that has the most evidence, but at the same time, the rest of the book is written so well. I kind of find it hard to believe that Rothfuss took such a nosedive by accident. He has to know what he’s doing, here. He has to know that his main character makes me want to punch a brick.

2. Since the book is told from Kvothe’s POV, he’s exaggerating to make himself seem cool. Maybe these events didn’t happen exactly how he’s saying. Maybe he’s an unreliable narrator… if that’s the case, he’s still a douchebag that is so insecure that he feels the need to embellish everything he’s done in his life to make himself seem neat.

3. This is the one I hope is happening: Kvothe, in present day, still has not defeated the Chandrian and his making himself seem foolish in his story so people don’t read it later and endanger themselves. Since the third book isn’t out yet, this is pure speculation. But with the skill of writing in the rest of the book, I wouldn’t be surprised if this was the case. Evidence to this comes from present-day creepies running around killing people. I’m thinking that Kvothe never does defeat his foe and now he’s trying to make himself sound like an idiot so nobody else follows in his tracks. I hope this is what’s happening, so so badly. Another add-on theory for this is that the Cthaeh actually is manipulating him into telling his story like a ding-dong. I feel like him running into the creature once and everyone freaking the eff out about it except him is too convenient. The Chandrian and the Cthaeh. They have to be making him act like a dolt. It has to be them. Right? RIGHT?! D:

Because if it’s not… gah. Just yuck.

That being said, I did mention Kvothe had his good parts. He’s never attacked or been lecherous towards a woman, even when under the influence of drugs or had obvious advantage over them. Why are you mentioning this Emily, you say? Shouldn’t this be expected behavior of a human? You’d think so, wouldn’t you. But I’ve read too many novels where abusive or deviant non-consensual behavior has been romanticized for some unknown reason. It was nice to read a fantasy novel without any of it, for once. Gosh, when this is the only good thing about a character I can come up with, that he meets the ‘normal human’ standards, I think that says a lot about social norms and common book content, no?

He’s also good to his friends. Though honestly that’s about all he’s got going for him, at least in my opinion.

So overall: I really liked the plot, the world, the lore and the side characters. Kvothe can jump off a cliff.

Will I read book three? …Effing probably. I need to know if my theory is correct. Dammit Rothfuss, you make me crazy but I still wanna read your book. Dammit dammit Dammit. I guess that’s what make a good writer. Grr.