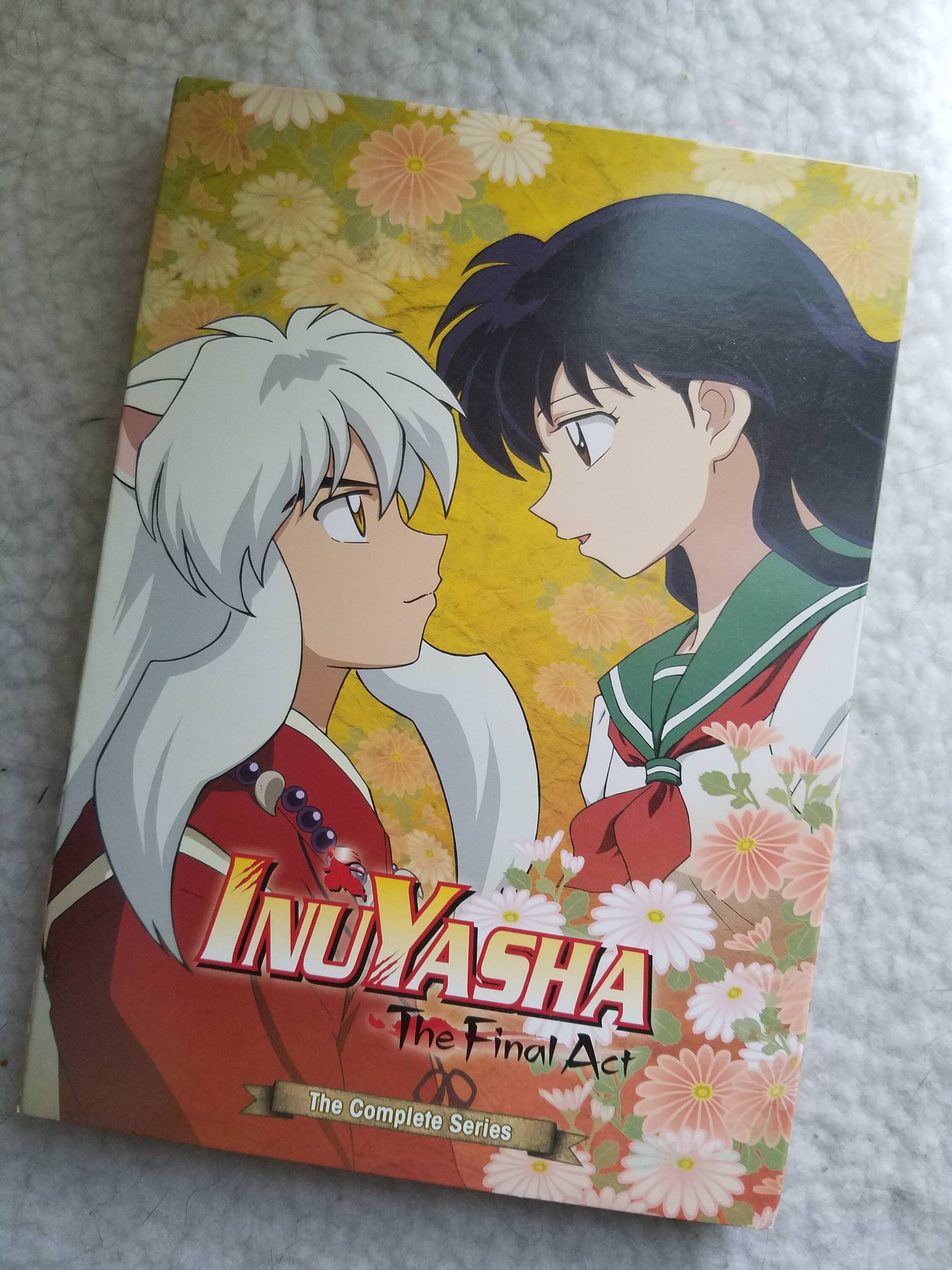 Today I’m doing a post of a different flavor: an anime blabber. I had stated a few months ago that I was going to start breaking out of the mold a bit concerning what I post about, and this is the first attempt at that.

MyAnimeList Synopsis: InuYasha: The Final Act is a continuation of the anime Inuyasha, which follows Kagome Higurashi, a fifteen-year-old girl whose normal life ends when a demon drags her into a cursed well on the grounds of her family’s Shinto shrine. Instead of hitting the bottom of the well, Kagome ends up 500 years in the past during Japan’s violent Sengoku period with the demon’s true target, a wish-granting jewel called the Shikon Jewel, reborn inside of her. After a battle with a revived demon accidentally causes the sacred jewel to shatter, Kagome enlists the help of a young hybrid dog-demon/human named Inuyasha to help her collect the shards and prevent them from falling into the wrong hands. Joining Kagome and Inuyasha on their quest are the orphan fox-demon Shippo, the intelligent monk Miroku, and the lethal demon slayer Sango. Together, they must set aside their differences and work together to find the power granting shards spread across feudal Japan and deal with the threats that arise.

Inuyasha was one of my gateway animes, so it will always hold a special place in my heart. I first started watching it when I was 15 years old, back when it was first debuting on Adult Swim back in 2005. It had begun airing originally in 2002 in the US and finished in 2006, so I caught on a bit late but was able to see the finale as it was released. As stated above, it followed a fifteen year old girl and as I was fifteen at the time, I totally loved it.

After the series finished up and I realized it wasn’t going to actually finish out the plot, I hunted down the manga and read the ending of it that way. After that, I never actually went back to watch The Final Act when it aired. So when I watched it now at 27, obviously I needed to buzz through the original seven seasons and four movies of Inuyasha first in preparation. It was totally worth it. It slowed down my reading of books, but it was time very well spent in my opinion.

The Final Act in my opinion had a different feel to it than the original series did. It wasn’t a huge difference, but it was there. It didn’t feel as involved, if that makes sense, but very rushed instead. I know that the manga that it was covering per episode was a lot more than the original series had done, so it definitely skimmed over or skipped things in the name of plot progression. Personally, I think it could have done with another large series to finished out the manga – there was enough plot left for sure to do it.

It did cover all the major bases though from what I remember, so overall it was rather enjoyable. Watching it was being a teenager again, minus the whole one episode per week at midnight on Saturdays, thing. I was able to watch it at my own pace whenever convenient, which was nice. The discs themselves (I bought the DVD set) were pretty good quality and had nice art on the front of each. Every time I switched to the next disc though I got a bit sadder, since I knew the end of the series was coming closer.

One of the major things I noticed watching this time around was my opinion of the characters – I was definitely a Kagome fan when I first watched it but this time around, not so much. I didn’t dislike her by any means but a lot of the drama she had to endure was kind of her own doing. She had the romantic rival Kikyo (who I disliked originally but seriously liked this time around) and the whole time I’m shaking my head like ‘why are you doing this to yourself. You can totally just walk away’. So I was a lot less sympathetic towards her romantic endeavors and hang ups. Inuyasha as well irritated me, but at the same time, I could better understand his emotional ties to Kikyo and his difficulty in severing them.

But I have to say… watching this as an adult and having been through a series of relationships, seeing all the romantic relationship dynamics in this show just screamed unhealthy to me. There was obvious border-line cheating via flirtation (which is or isn’t, depending on a couples’ boundaries but obviously half the party involved wasn’t a huge fan in the show), there was a lot of yelling and name calling, and the ‘sit’ commands that Kagome gives Inuyasha, while funny to me as a teen I couldn’t help but see as abusive now, especially when Kagome would give a command out of anger. Occasionally she’d do it to pull Inuyasha out of the way of getting injured… but most of the time she was just pissed at him. Wasn’t a great message and I couldn’t really ignore how uncomfortable it made me. Sooo… can’t say I was really a fan of aaaany of the relationships in the series. I feel like all four of the characters involved in their respective situations needed to do a lot of maturing… except maybe Sango. She seemed pretty good most of the time.

And Sesshomaru was still…. Sesshomaru, haha. Though he was a lot more talkative in this series than he was in the last. It almost felt out of character for him, honestly. But it made a lot of the fanfiction I read as a teen more believable, I suppose. He was in the series a lot more, too – I think he was in 22 or 23 of the 26 total episodes. And as he was and still is my favorite character, I wasn’t complaining. He and Rin being he and Rin was adorable and I lived for any scenes with the two of them together. I feel like those two are one of my favorite non-romantic dynamics I’ve come across. They’re always so cute. Jaken too I took a shine to – though I noticed that literally nobody is nice to him except Rin, which is kinda sad. No wonder the poor little thing is irritable a lot of the time. I feel like Jaken and I could be bros.

The plot in this, while rushed, as pretty good. I feel like Naraku just needed a hug though, honestly. I feel like sooo much could have been avoided if someone had just been like ‘no it’s okay gimme hug come here’. Naraku is probably one of my favorite characters too, but he was almost comically villainous at times, it was amusing. And seeing the plot finalize in the anime like it did in the manga was just so satisfying to see after being a fan of the show for over a decade. I feel like I got closure.

So overall, I enjoyed watching this series, and the time I spent rewatching the original to watch this one too was quite enjoyable.