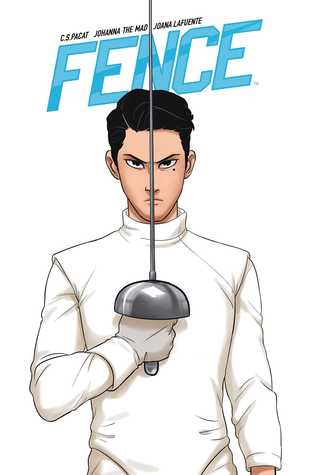 I feel like I suffered from overblown expectations for this one.

I read Pacat’s Captive Prince trilogy earlier this year and absolutely adored it, so going into this one, I guess I was expecting to immediately love it. Unfortunately, my feelings toward this first volume are more mild than I was hoping. Don’t get me wrong – I did like this and I feel like it has a lot of room to become a favorite, but the first trade alone didn’t quite do it for me. And that’s my own fault there.

Fence follows a young man as he enters a school and joins the fencing team with the hopes of winning internationally. The main character is written in a way that didn’t quite have me rooting for him. I tend not to like characters with egos and nothing to back it up, and in the beginning, this one did. It wasn’t huge, not like Kvothe-level or anything, but seeing him not immediately being the best fencer was super, super refreshing. I grew to like the character more as the story progressed and he learned a bit of humility.

The character on the cover of the issue is the main character’s rival, and I found him to be much more amusing. He’s written to be a bit of a jerk, though very skilled. He also has an ego, but it bothered me far less, as he had the years and years of training to back it up, as opposed to have just brazen over-confidence in himself. He could still use a bit of character development, but I’m gonna not say too much more on that, given it’s only been one trade volume.

The remaining cast of characters were all interesting in their own ways, but none of them have really developed too much so far, so I haven’t really decided if I like any of them over others. Reading this trade, with the cast of characters and the tone it set, reminded me a lot of Yuri!!! On Ice and Free! . It had a light-fluffiness to it that was enjoyable to read. So if you’re not into quasi-romance that will eventually end up being actual romance, then this series will likely not float your boat. Because I can see it coming a mile away – the graphic novel is listed as lgbt romance, so I know it’s coming. The hate-to-love trope is strong in this one, man. I feel it in my bones, and I’m looking forward to it. This trope, when written well, is wonderful. When it’s not, it’s really really not. But having read C. S. Pacat’s attempt at the trope before, I know she’ll do a decent job of it, so I’m excited.

So, this first volume was a solid beginning, and it definitely has a lot of potential to become a favorite as the series progresses. But, I think my high expectations made me not love this one as much as I thought I would. I’m still going to continue it, and will buy the second volume when my buying ban is over, so I hope it only gets better from here.