I found out about this super neat readathon yesterday, and I’m jumping on board! It starts tomorrow, September 7th and runs through the 21st, so if you decide you’d like to participate as well, do it! Get on it!

Basically, the premise of the readathon is that Earth has become a craphole (shocker) and you need to escape on one of four shuttles that will traverse the solar system, visiting planets to determine where to live. Each shuttle has a reading challenge, and then each planet has one as well. So, depending on which shuttle you choose, you’ll be participating in the challenges in different order. My goal is to read books that are physically in my house – no buying, no borrowing (…ones that aren’t already borrowed) from friends.

At this time, I’m not positive which shuttle I’ll choose, so I’ve decided to come up with books for all the prompts, just in case. Will I get to all of them? Hah. HAH. But it’ll be fun trying anyways.

Here are the prompts and the map, as seen on the twitter I’ve linked above: 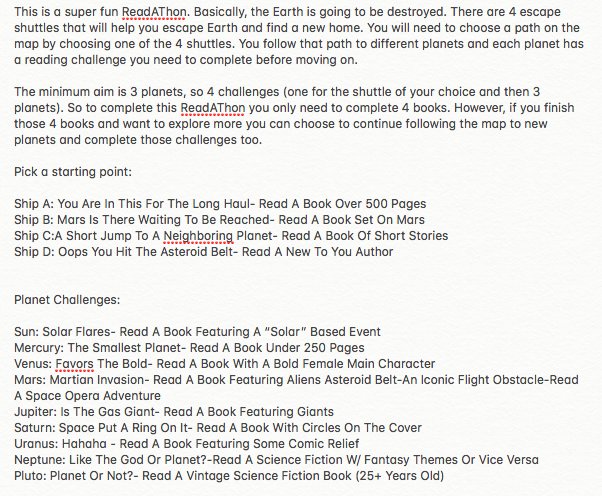 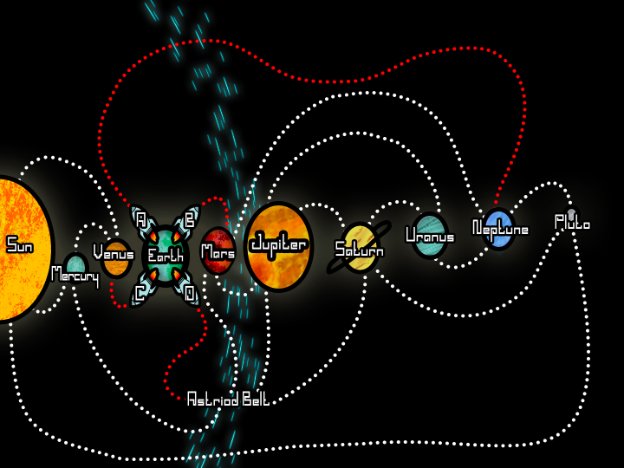 Shuttle A: Read a book over 500 pages

Shuttle B: Read a book set on Mars

Imagine living on a planet with six suns that never experiences Darkness. Imagine never having seen the Stars. Then, one by one your suns start to set, gradually leading you into Darkness for the first time ever. Image the terror of such a Nightfall.

Scientists on the planet Kalgash discover that an eclipse – an event that occurs only every 2049 years – is imminent, and that a society unfamiliar with Darkness will be plunged into madness and chaos. They realize that their civilization will end, for the people of Kalgash have a proven fear of Darkness, but they are unable to predict the insanity and destruction that will accompany the awesome splendor of Nightfall.

Mercury: A book under 250 pages

Saturn: A book with circles on the cover

And that’s it! I’m very much looking forward to this readathon – I think it’s a super neat concept. If you decide to join, let me know! Happy reading!

4 thoughts on “Tome Infinity and Beyond Readathon!”