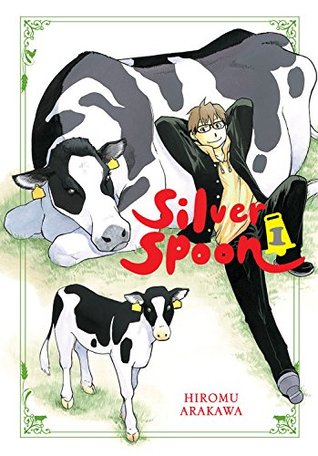 Who knew I’d like reading about cows so much?

Silver Spoon volume one is a new series from the same author that wrote Fullmetal Alchemist. Anyone remotely familiar with manga or anime has likely at least heard of that series, and since it’s one of my all-time favorites, the author has become a bit of an auto-buy for me. So when I saw this one, I picked up the first volume to try it out.

Very much unlike the high action, high stakes plot of Fullmetal, Silver Spoon is instead a slice of life manga with a much more sedated pace. It follows the main character Yuugo Hachiken, a student who enrolls in an agricultural high school, as he learns the ins and outs of managing a farm and farm animals. The author herself grew up on a farm, so the knowledge put into the story is first hand.

The series alters between a light, humorous tone and a grimmer one. The story does not shy away from the grit required with handling farm animals. The main character, having no farming background himself. learns what that means quickly. The narrative explores the main character’s discomfort with seeing exactly where his food comes from, but it does it in a way that is neither cruel or really makes fun of him or the other students who are doing the work required. It was interesting to see, as someone who was very much raised in a city and has been around a full sized cow only in petting zoos.

The character design in the manga is very similar to that of Fullmetal Alchemist, and it was almost a nostalgic experience, seeing characters who look close to ones I know already. The humoristic art style is also the same, and I enjoyed it just as much as I did last time.

In addition to the raising of farm animals, this manga, within the first volume, also starts to cover various other important topics, such what it’s like to experience a lack of motivation. The main character finds himself surrounded by highly driven people, all with their own goals and aspirations, and finds himself feeling inadequate. It talks about what it’s like when you’re expected to feel all these things, but you just… don’t. It’s not a topic often discussed, as ‘go-getters’ tend to be the center of story lines.

Another thing I really liked about this manga was one of the female characters: Tamako Inada. She’s introduced right near the beginning of the series and is very overweight. Her classmates make comments in passing about her, ranging from concern to outright meanness. My favorite thing about her though, is that she doesn’t seem to care – everything said about her just bounces off her, she ignores it or she proves them wrong purely by who she is. She’s just so resilient, and she has a really great sense of humor to boot. She’s by far, in my book at least, the funniest character. I think she’s one of the hidden gems in this series, and will become one of my favorites.

So overall, the humor in this combined with the seriousness made me really like this first volume. Hiromu Arakawa has exceeded expectations once again, and I plan on getting more of this series soon!