Happy Hump Day! I got some books this month! As mentioned in previous posts, my limit is five books per month, not including manga if I read the manga immediately.

This month I went one over my limit – I got six books. I also got five manga, all of which I read immediately, so we’re good there. 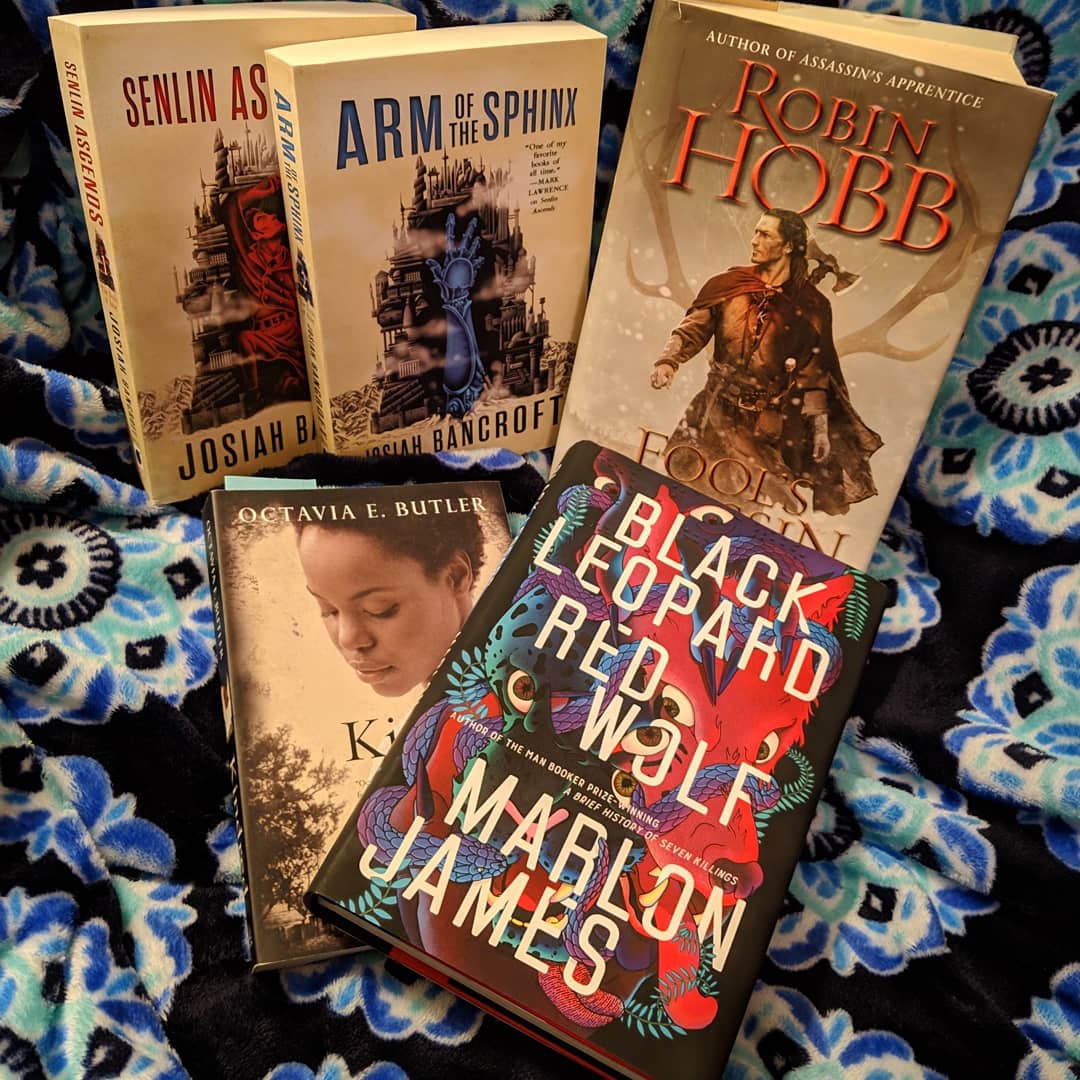 Fool’s Assassin by Robin Hobb – This is the first book in the last trilogy within the Realm of the Elderlings and I feel like it’s the beginning of the end of an era. I don’t know what I’m going to do after I finish this world, man. As always, buddy reading this one with Zezee @ZezeeWithBooks. Should be starting in March sometime!

Kindred by Octavia E. Butler – I picked this up weirdly enough from hearing a question on Jeopardy. This book was the question to the $2000 answer a few weeks ago, and the answer gave a brief synopsis of the thing. It was enough that I went out and got it the next day. I’m in the middle of it, and I really like it, but it’s freaking me out – so much second hand anxiety for the main character.

Black Leopard, Red Wolf by Marlon James – This book baby I got shortly after release day. I’m about 100 pages into it so far and am enjoying it. The writing took me a bit to get into but it finally clicked in my head and I’m able to go through it much more quickly. I’m buddy reading this one with Katy @BookbinderWay!

Not pictured: The Wise Man’s Fear by Patrick Rothfuss – I decided I wanted to own a copy of this book, even though I’ve got mixed feelings on it. I chose so because I really like the first book… aaaaaand despite my deep-seeded hatred for Kvothe, I do like the world, plot, etc and will likely read the third book when it comes out. So. It’s not pictured because I lent it out to a friend the day I bought it, hyuck. 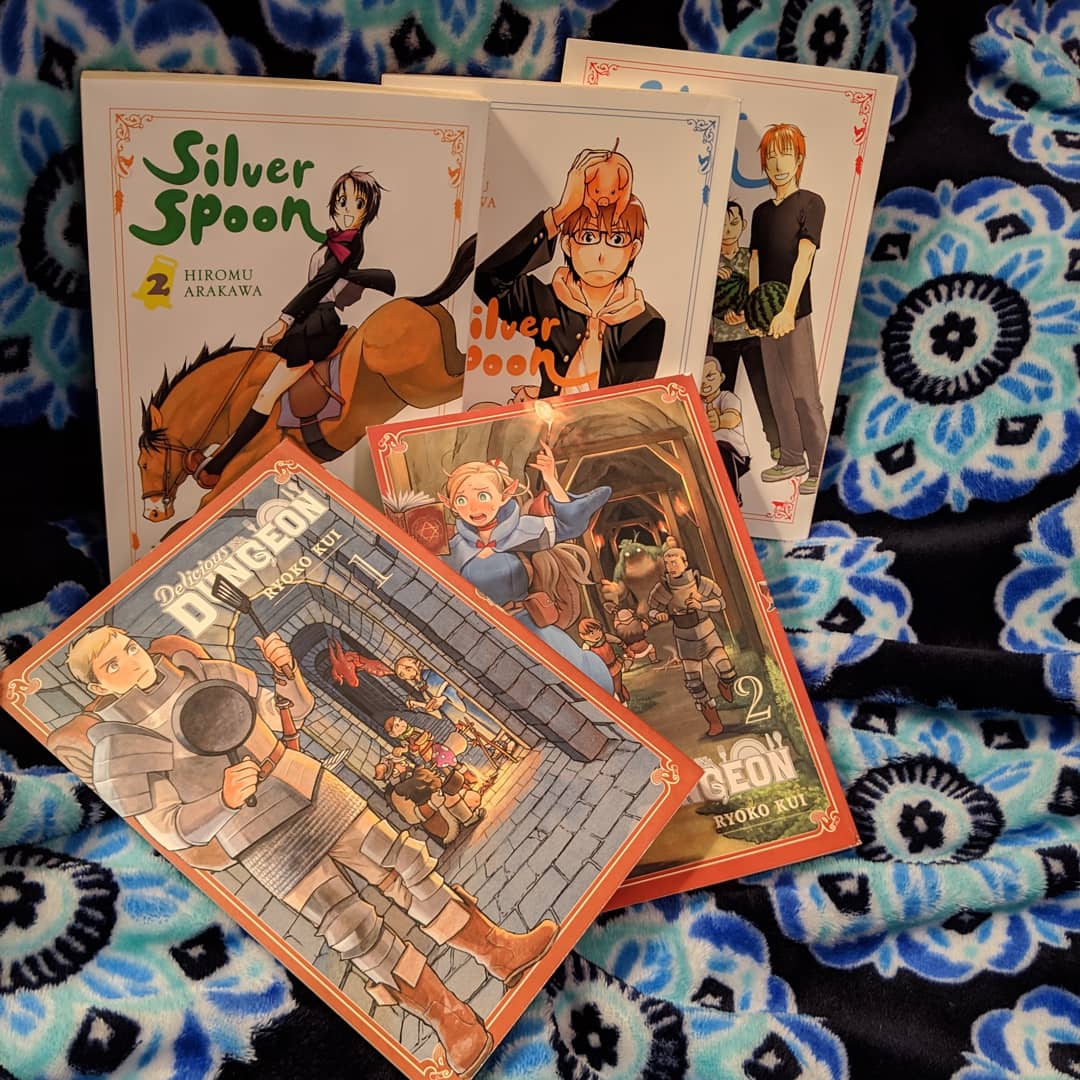 Silver Spoon vols 2-4 by Hiromu Arakawa – Continuing from December when I got volume 1, I’m really enjoying this series! It’s by the author of Fullmetal Alchemist and while it’s totally different, it has the same humorous flair and I really like it.

Delicious in Dungeon vols 1-2 by Ryoko Kui – A month (or two? three?) ago, Sionna @BooksinHerEyes gushed a bit about this manga and pointed it out as something I might like. So when I saw it sitting on the shelf, I picked up the first couple volumes. I really liked them! They’re cute, funny, and surprisingly homey and wholesome for taking place in a dungeon full of monsters. (Though I gotta wonder at the one guy’s mental state, seeing something and immediately going ‘is it edible’, ahahaha)  I’ll be continuing this series and am v. excited for it!

And that’s it! I’ve already got my eyes on a couple books I want that are coming out in March or have come out recently that I haven’t nabbed yet. After that in April and May (and maybe June) I’ll be on a buying ban, so there won’t be any book hauls for those two months. Since they’re planned non-haul months though, it won’t affect my new year’s resolution to have monthly hauls (yay loopholes).

Have you read any of these? Did you get any fun books this month? Happy reading!