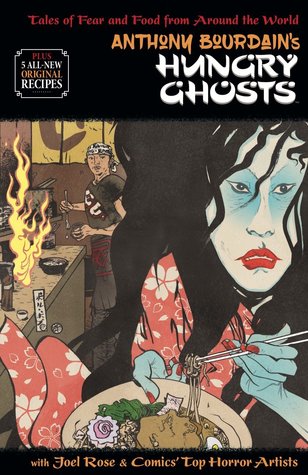 Hungry Ghosts is not what I expected it to be, then again, going into it I wasn’t sure what I was expecting. I had never read a graphic novel cookbook combination before.

This book came out October of last year, and it had been on my radar ever since. I really like Anthony Bourdain’s work, and with recent events, it made me want to read it even more. So, when I saw it in the store, sitting there going ‘Emily here I am!’ I had to pick it up.

The basic premise of this book is a group of people are having a fancy dinner when they begin an ancient samurai game of nerves – light a bunch of candles, tell a scary story, and then blow out a candle. Each person in the group does this until all the candles are extinguished. Samurai would do this feat of nerve with the expectation that speaking about the spirits and demons would draw them near, and the darker it got, the more likely it would be for the speaker to become possessed.

Each story that a person tells plays out as a chapter, so you get a bunch of mini stories with the overarching popping in and out around it. The art in this was really neat – the illustrators did a really good job. It’s a much darker, heavier style than I’m used to, but it fit for the content of the thing and I really enjoyed it. Each story was illustrated in a different way too, which was really cool. It was also really neat getting to see all of these monsters and myths of Japanese folklore played out. Some of them I had heard of, others I had not. Each story surrounded hunger somehow (hence the title) which lent to a sense of cohesiveness.

Overall I really liked the structure and the content of the book. I think the one thing that kept me from loving it was lack of depth. And I know that it might not be fair, judging a graphic novel for depth, but at the same time, there are definitely other graphics I’ve read that do have that depth within a single trade issue. This one felt like we were only scratching the surface of what could have been really thorough looks at all these monsters, and because of that I had a hard time getting really invested. The ending was also rather abrupt and I finished the story with a feeling of ‘Wait, that’s it?’. At the same time though, the abruptness and the quick stories of each creature was probably what was desired by the authors and artists – scary stories are scary stories, and a lot of them originated from small snippets of tales like these ones. The structure was probably set up that way to feel like it was going back to the roots.

The recipes at the end are fun too, though I think I’d only be able to feasibly make one of them, the risotto. All of the others are way above my cooking skills. I liked them though and if anyone wants to come over and make them for me, be my guest.

So, do I recommend this? That depends. If you’re looking for something to become totally invested in, probably not. But! If you’re interested in Japanese myth, don’t mind a quick-paced campfire-esque telling of stories, and really want to see some neat art, then definitely. This book was a really neat thing, and I enjoyed it.