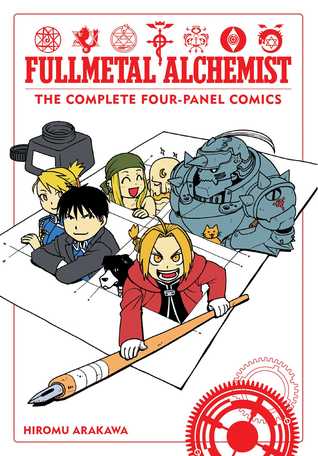 This was so nice.

I had no idea this collection of four panels was coming out until I walked past it in the bookstore – it wasn’t even in the manga section. I froze and picked it up immediately.

This book is a collection of all the Fullmetal Alchemist four-panels – at the back of each of the 27 volumes of manga, there’s a small section of fun comics that the author made. They’re humorous, don’t really play into the plot (but do reference it, so they’ll be spoilery if you haven’t finished the series), and when I read them, I loved them. So that’s what I thought I would be getting when I picked this up.

Turns out, it was way more than that. It started with the manga four-panels – a title at the top would tell which volume it was from. And then after that, there were four-panels that were included in the original FMA anime DVD collection. I didn’t even know they contained four-panels. And then it went into comics from the FMA Brotherhood DVD collection. After that, it threw in all the comics that had appeared in Shonen Jump issues and various other medias, and finally it included a few comics that were never published anywhere.

So… I expected one thing and I got that and so much more. It. Was. Fantastic. I already knew I was going to like rereading all the four-panels – it had been a few years since I read the series so while most of them struck a chord of memory for me, some of them I had forgotten completely. And they’re funny – I laughed out loud multiple times. When I got to the DVD collection comics and beyond, it was a mix of new material and nostalgia. I had never seen the comics before obviously, but the contents of them hovered around the content of the DVDs, so having seen both anime series multiple times, it was very enjoyable to read extra material about them.

So overall, I loved this. I can see myself rereading it multiple times in the future, and I do believe it’s gained a spot in my ‘favorite books’ list. And man, it really, really made me want to reread the series. Maybe that’ll happen this year. It’s been years.