Hello! I’m done buying books for a while! Every year, I go on a 2-4 month book buying ban. This will be the third year I’ve done it. The difference is, this time I’m doing it from now until June 15th when I usually do it in the fall – I’ve decided to switch it up. I’ve never failed it. Each year, I’ve succeeded in sticking to the ban for the allotted time, and I plan on doing the same thing this year.

So, from now until June 15th, I will not buy any books. Keep in mind, I can’t stop people from giving gifts. I don’t really expect to get any, as my birthday isn’t until August, but just so it’s clear. The ban is for me buying books.

That being said, on to the books that I bought before the ban went into effect. These are the books I purchased in March: 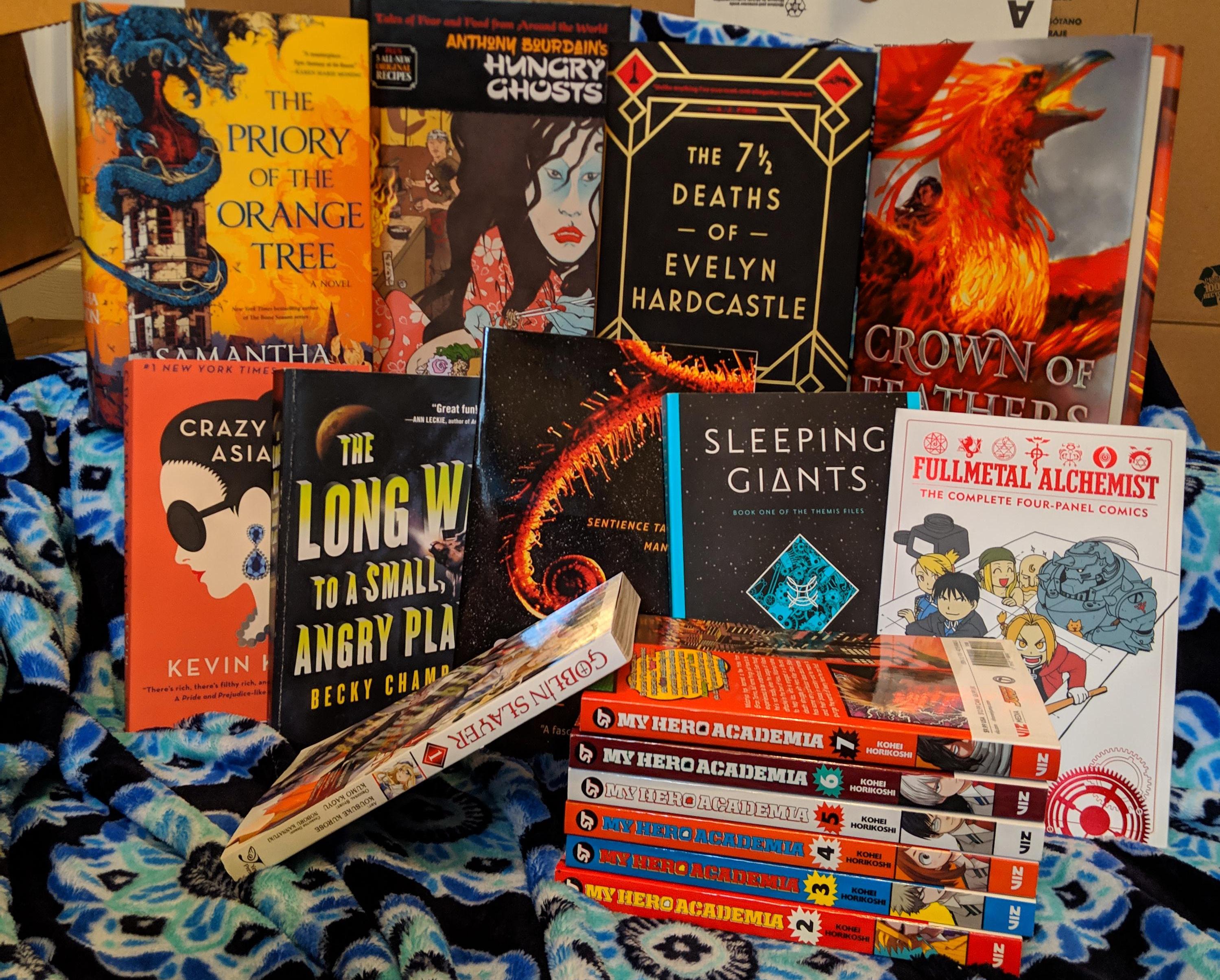 Emily, didn’t you say you were only allowed five books, not including manga and graphic novels? Yes, yes I did. I was bad. I got seven. 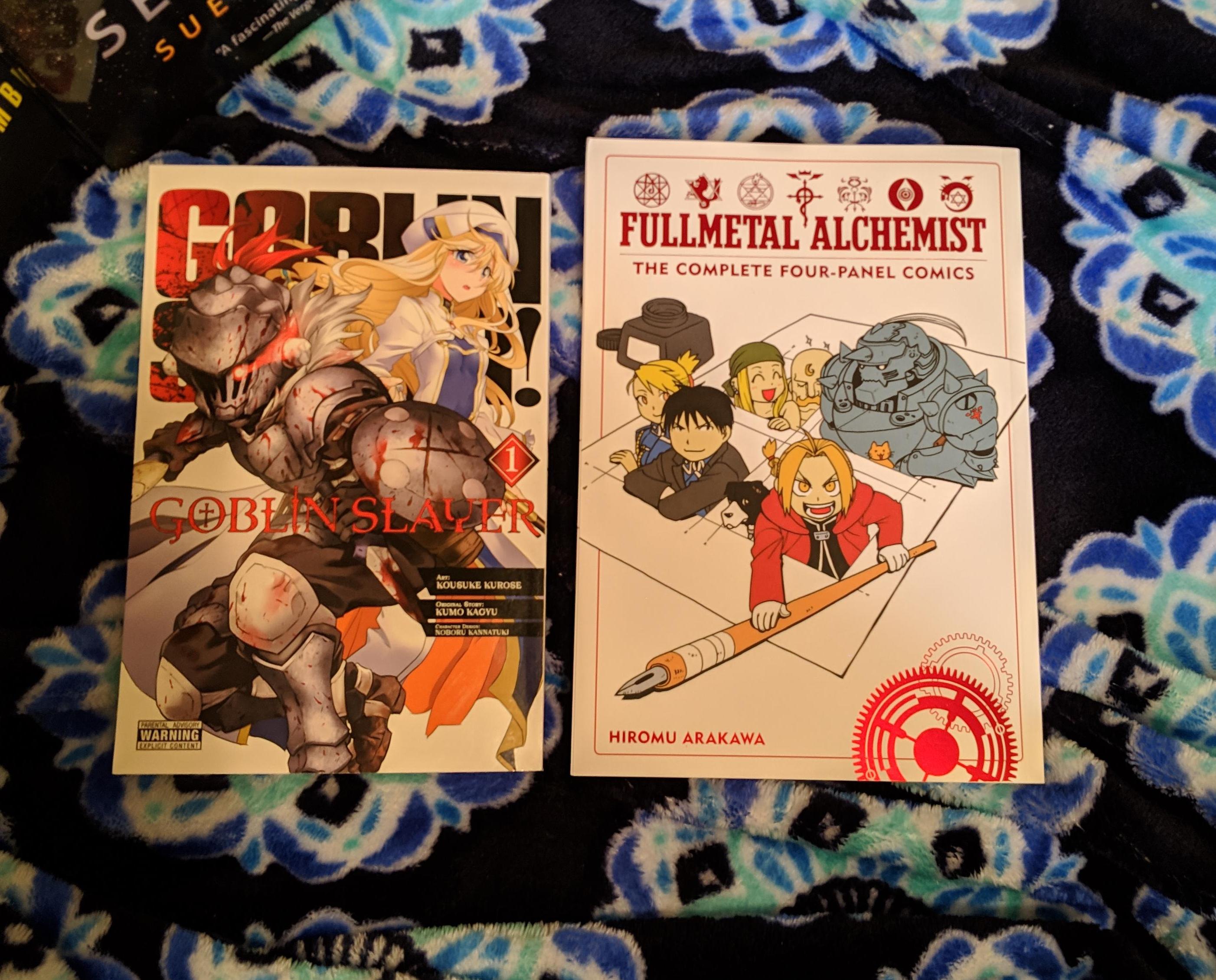 Starting with the manga, I got Goblin Slayer volume 1 by Kumo Kagyu and Fullmetal Alchemist: The Complete Four Panel Comics by Hiromu Arakawa. I watched the Goblin Slayer anime a month or two ago and I adored it. It’s not for the faint of heart and definitely has some adult content, be warned, but I feel like it was a solidly good season, and I wanted to read the source material. Well.. kind of source material. The actual source is a light novel, and the manga is based off it… and the anime is based off the manga. Whatever. And for Fullmetal, I’ve already read and reviewed it, and gave it five stars. It’s exactly what it sounds like – all the end comics at the back of the manga and dvd packages. It was a joy to read. I’ve reviewed Goblin Slayer, too! I really liked it as well 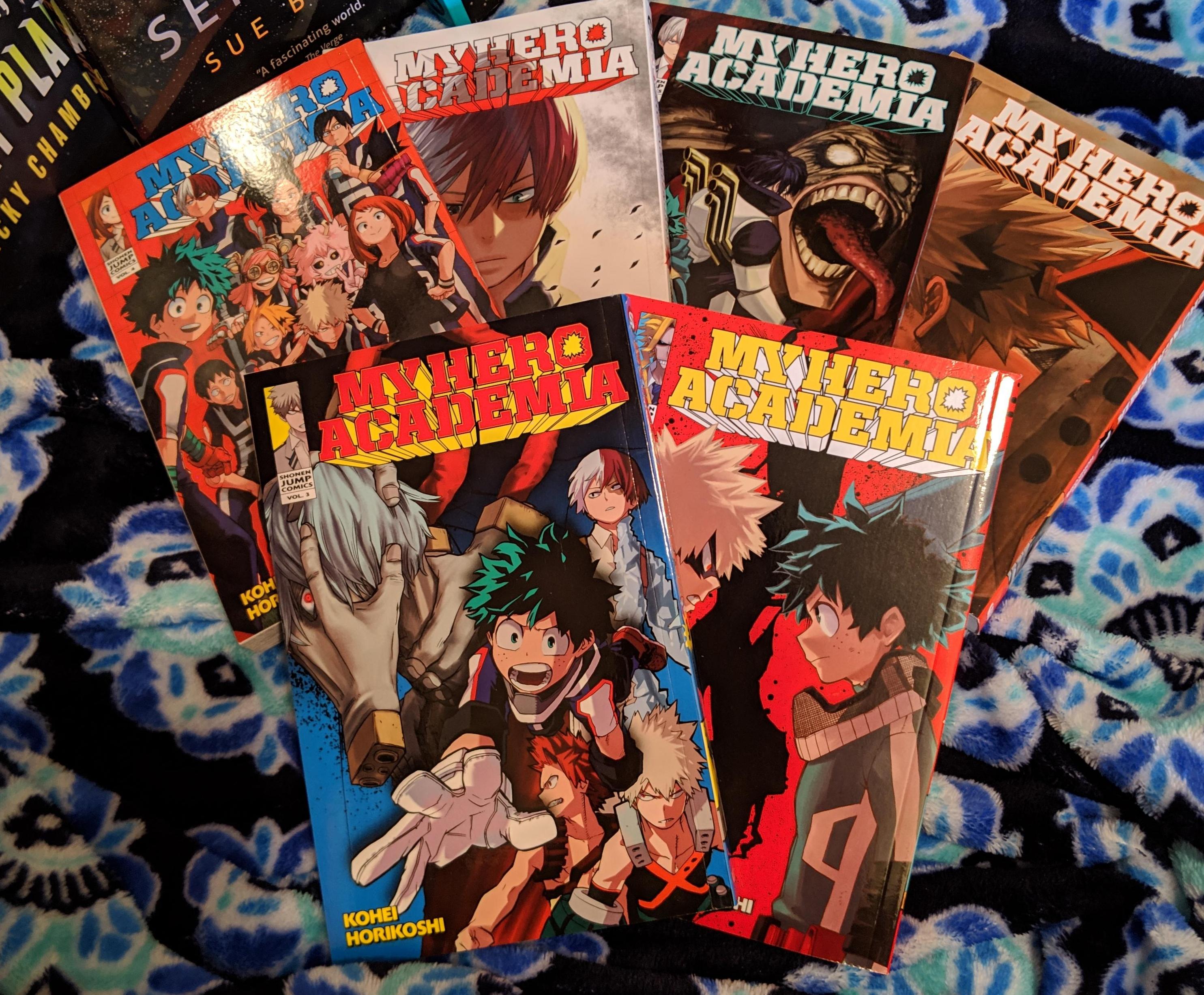 I went to the bookstore last week, intent on buying and fifth and final book allotted for March. Well… I had two twenty percent off coupons that I couldn’t combine into one book and manga were on sale – buy 2, get 1. So obviously I bought two books and six manga. Welp. I got six volumes of My Hero Academia by Kohei Horikoshi and really, if you haven’t started watching or reading this series, you should. It’s so great. 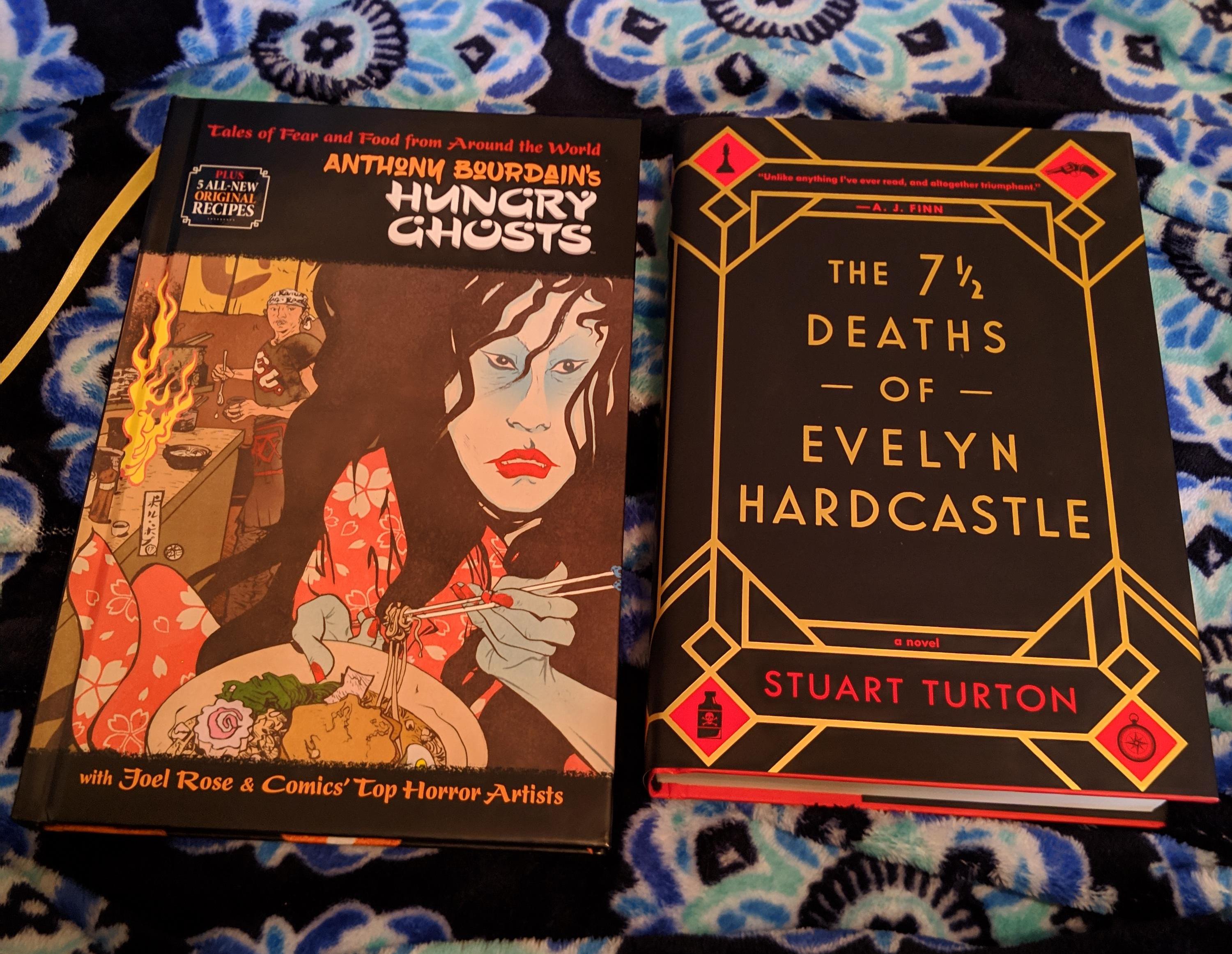 These two things I picked up at the same time – they were my first two purchases of the month! Hungry Ghosts by Anthony Bourdain was a graphic novel that I’d had my eye on for a few months, and when BN had their blowout sale, I picked it up, along with The 7 1/2 Deaths of Evelyn Hardcastle by Stuart Turton, which has been recommended to me over and over by Katy @BookbinderWay. I haven’t read the latter yet, but I did read and review Hungry Ghosts. 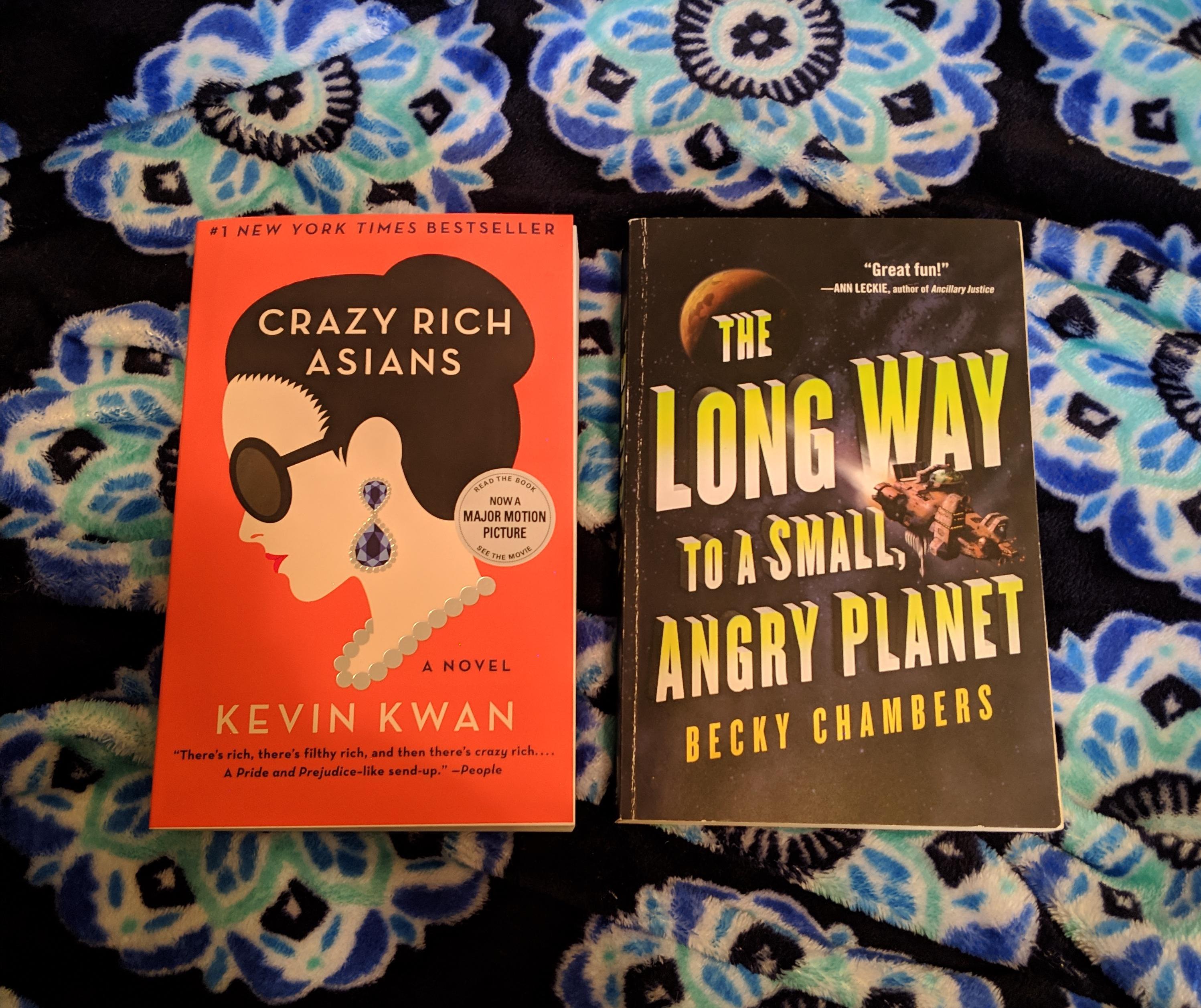 Crazy Rich Asians by Kevin Kwan was one of my ‘Emily is bad’ books. I picked it up after I had already gone over my limit for the month, making it my seventh book. Sometimes you’re in walmart and you just lose control, what can I say. I found The Long Way to a Small, Angry Planet by Becky Chambers in Half Price books, and I about squeaked. My local BN hasn’t had a copy of it since I can remember, so when I actually saw one, I had to grab it. 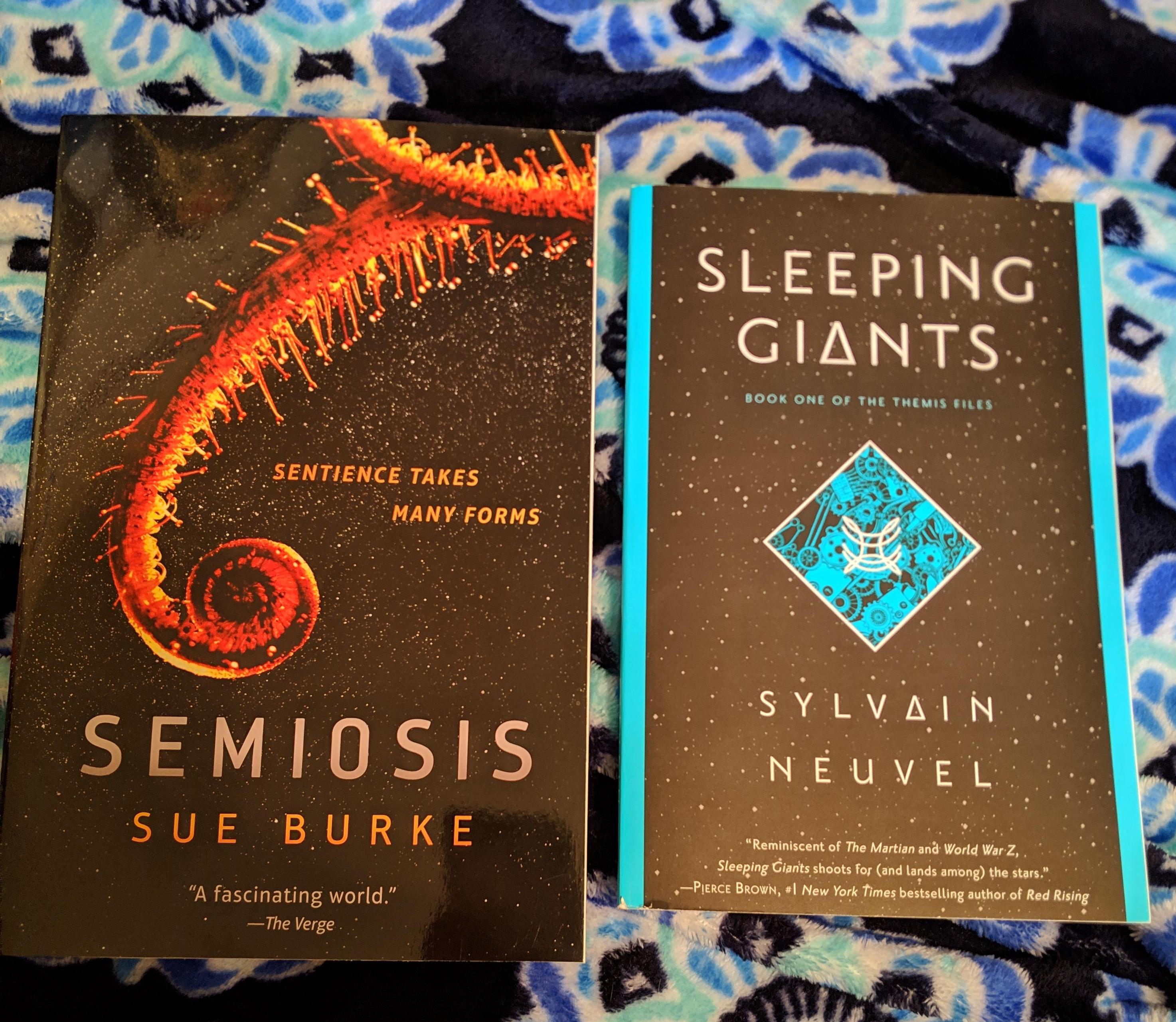 I’ve been itching to get a copy of Semiosis by Sue Burke for ages, but it fell into that weird lull of nobody having it in stock, even online. So I waited until the paperback released this month, and I scooped up a copy before they could disappear again. Sleeping Giants by Sylvain Neuvel is my other ‘Emily is bad’ book. It was the extra one I bought at the bookstore when I had those two coupons. C’est la vie. 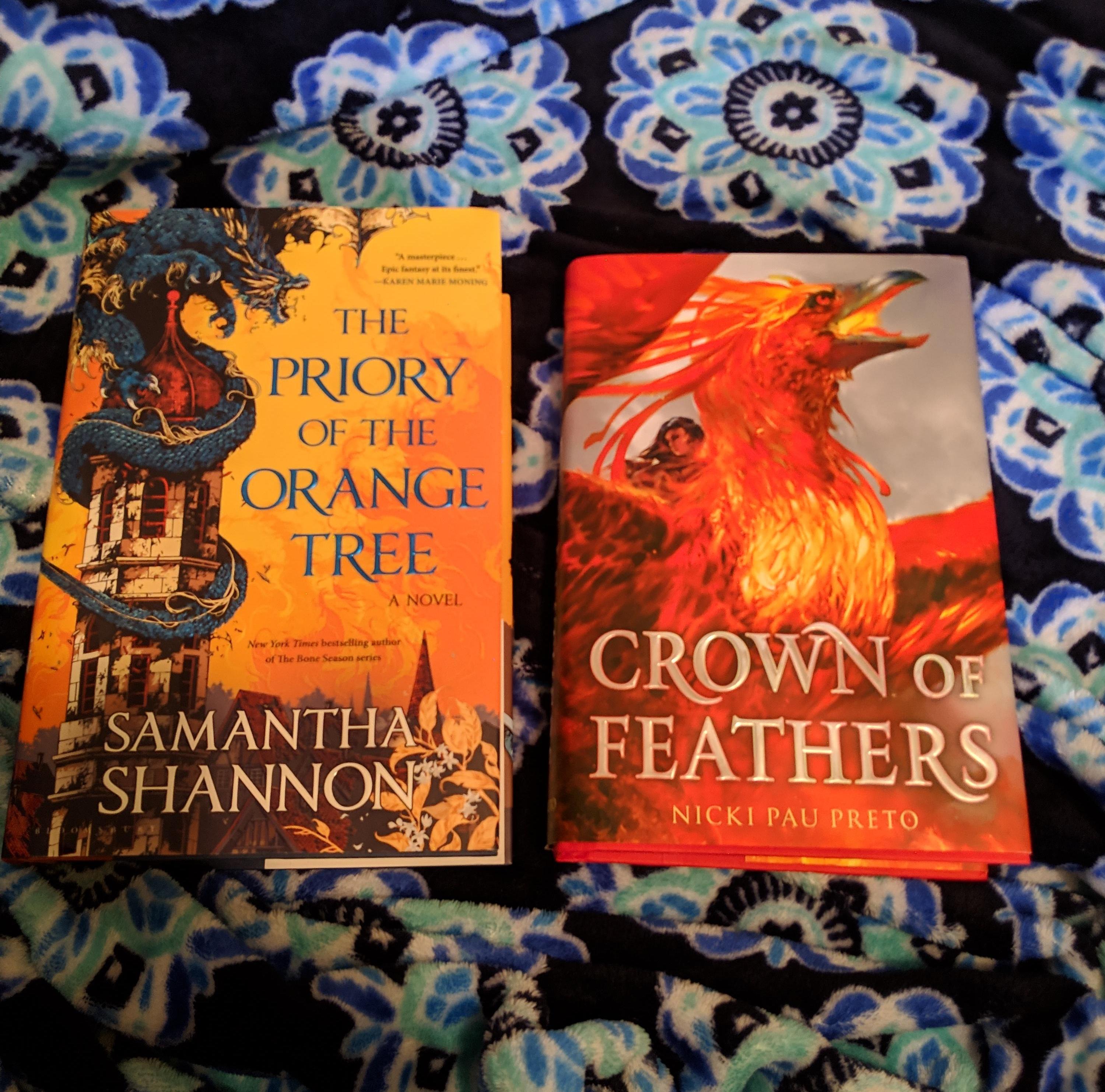 Finally, I purchased The Priory of the Orange Tree by Samantha Shannon and Crown of Feathers by Nicki Pau Preto. And both of these, I saw on the shelves a day before their official release dates. But I’m not gonna tell you where – I’m no narc. I’m very excited for both of these, man. So. Pumped.

And that’s it! I kinda went overboard this month. I think the knowledge that these are all the books I could get for two and a half months had me a little uh… loose with my wallet this month. Welp. At least now I’ll have plenty to read during the ban.

Have you read any of the above? What is your opinion on book buying bans? Lemme know!