It is here! The new r/Fantasy Bingo Card has arrived!

Every year, the fantasy subreddit over on reddit holds a year-long challenge where you try to read books to fill in a bingo card that they provide. I just made a post yesterday wrapping up the card I complete from last year, and this year’s card just came out today!

So today’s post will be the card and going over potential books I could read for the first row.

For the full rules and FAQs and whatnot, visit the official r/Fantasy post about it. There also a helpful recommendations post so you can get some ideas for books. There’s also a Hard Mode and a Hero Mode that can be done, which is explained in the link. So if you’re even minutely interested, I suggest checking it out. 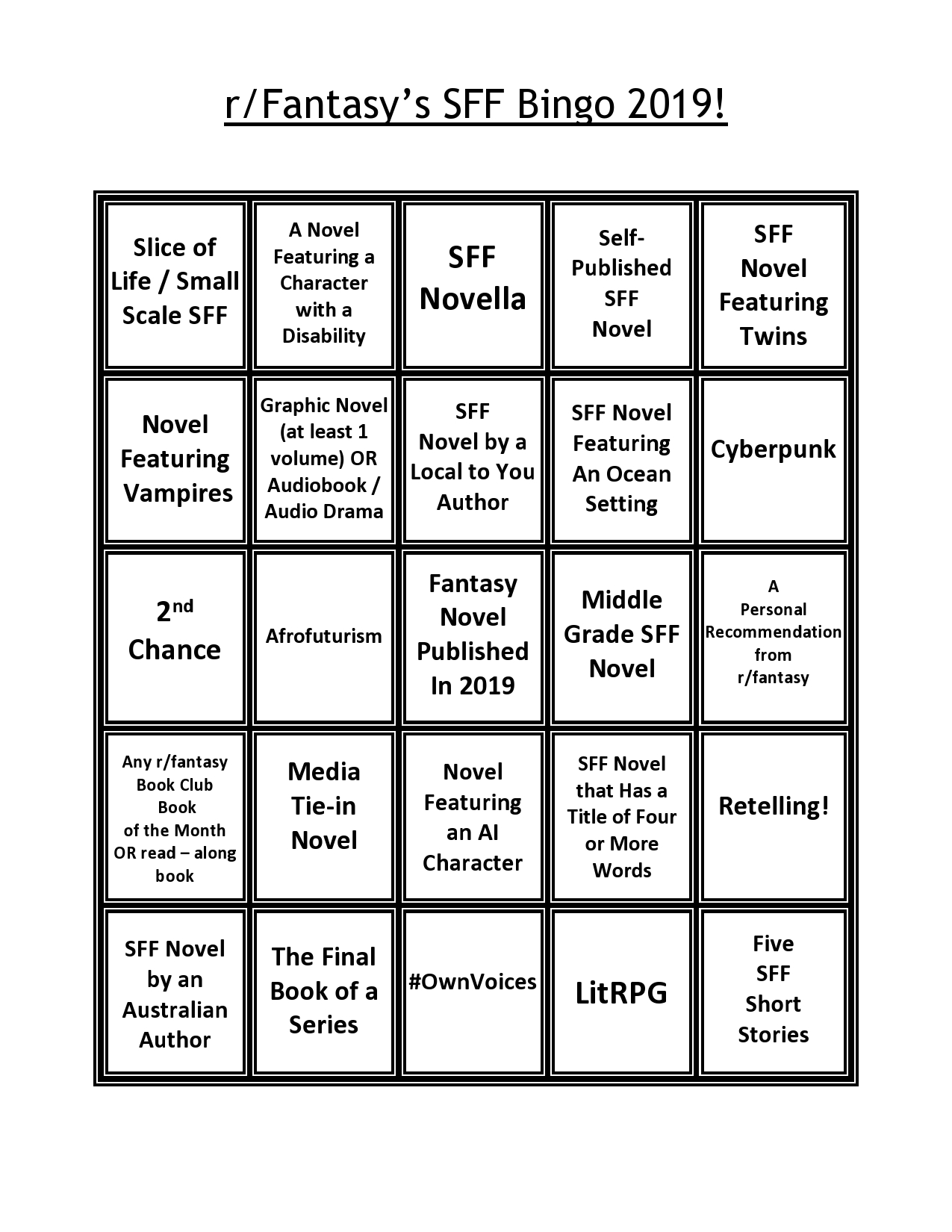 So, Hero Mode – the ‘write a review for every book you read’… I think I might do that. I mean, I do have a book blog, and if you know me at all, you know sometimes I can go months without writing a review. I’m hoping this’ll get me more consistent.

As far as Hard Mode goes, I’m not going to try on purpose, but if a book I choose fills the prompt for Hard Mode, then sweet.

I’m very excited for this card – there are a lot of prompts in here for books that I wouldn’t normally read. It’ll broaden my horizons, and hopefully I’ll find some books that I absolutely love. But because a lot of the prompts are from unfamiliar territory, I’m going to have to break from my own tradition: usually, I try to fulfill a prompt with a book I already own. But a lot of these, I know I have nothing that would work for them. So I’m going to do a bit of research, and I’m going to use my library to get those books. I figure if I like them, then I’ll buy copies. But I don’t want to buy a bunch of books I’m not sure I’m gonna like for the prompts. So library, here I come.

Last year, I did five posts of possible picks. This year, I’m doing the first row in this post, and then doubling up for the last four rows, meaning two more posts are heading your way. So, from the prompts written out in the r/Fantasy thread:

The term “slice of life” refers to a storytelling technique that presents a seemingly arbitrary sample of a character’s life, which often lacks a coherent plot, conflict, or ending. The story may have little plot progress and often has no exposition, conflict, or dénouement. A good example of this would be Becky Chambers novel Record of a Spaceborn Few. HARD MODE: Read something other than Record of a Spaceborn Few.

A SFF Novel Featuring a Character With a Disability

I think this one should be fairly self-explanatory. Anything considered a disability would count whether it’s a physical disability or a mental health disability. HARD MODE: The character has to be a main protagonist, not a side character.

Right now, I’m leaning towards Cinder by Marissa Meyer or Arm of the Sphinx by Josiah Bancroft. The former counts for Hard Mode, the latter would not.

Works of fiction of between 17,500 and 40,000 words. HARD MODE: Novella is NOT published by Tor.com Publishing.

I don’t own any novellas, I don’t think. So I think I’ll either scoop up a copy of Every Heart a Doorway by Seanan McGuire or Binti by Nnedi Okorafor. Who knows!

Only self-published novels will count for this square. If the novel has been picked up by a publisher as long as you read it when it was self-pubbed it will still count. HARD MODE: Self-pubbed and has fewer than 50 ratings on goodreads.

This one, I’m not sure yet either. There are always people posting their novels for purchase as ebook on the r/Fantasy subreddit, so I might grab one of those. I might also ask around – I have a few different friends and I know more than one of them has self-published.

Self-explanatory. HARD MODE: At least one of the twins has to be a main protagonist. (extra hard mode just for funsies – the twin thing has to be plot relevant)

The one that sticks out most right now is The Cruel Prince by Holly Black, which I don’t own, so I’d have to get it from the library. But if I happen to come across twins in another book I’m reading, I might use that one instead.

And that’s it for now! Picks for rows 2 and 3 will be out soon. If you plan on participating, let me know! I’m hoping a lot of the books I’m reading for the OWLs readathon can double up for this. That’d be convenient. Happy reading!