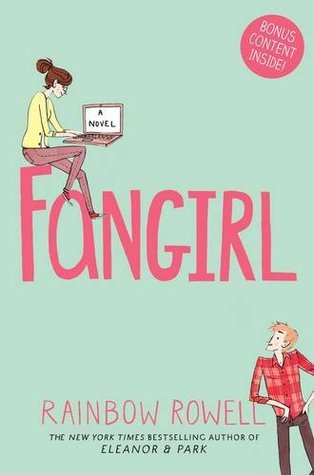 Whether I end up liking or disliking a YA book, I tend to always fly through them. This one was no exception. I buzzed through this book in two and a half days. An adult fantasy of similar size would at least take a week, maybe more. So already, this book has that going for it.

I knew that this book is basically one of the most hyped in the online book community, and reading the synopsis, I can see why. The character is very relatable – young woman going to college, unsure of herself, writes fanfiction, is generally nerdy. I understand how this book could be the love of so many people. Unfortunately, it didn’t live up to the hype for me.

So, overview of the book: As mentioned, it follows a young woman, Cath, as she goes to college with her twin sister Wren. Cath is basically a homebody who wants nothing to change and Wren is dying for the opposite. As the book goes, Cath meets her roommate, a boy, has some family drama and writes fanfiction.

My opinions: The thing that kept me from rating this book higher was Cath herself. She has social anxiety and likes things to be just as they are. Now, I’m not knocking social anxiety by any means. It occasionally flares up for me, a lot of my friends have it to an extent, etc. It’s not the anxiety that makes me dislike Cath so much. It’s how she deals with it.

Basically any time a character would act in a way that made Cath anxious or unhappy, like her sister rooming with someone else instead of her, yada yada, Cath would become controlling. She would berate the other person for doing something that she was uncomfortable doing herself. She would basically give them a guilt trip of ‘How dare you not be anxious/upset/angry about this when I am’ and it really bugged me. I mean if she’s anxious, fine, but guilting other people for not being anxious is a no-no. My above example is just one of many times she did this, and by the end, I didn’t really like her at all because of it.

Also, she wrote this fanfiction throughout the book, which at first was great. I wrote fanfiction when I was a teen too, and it was neat to get back into the mindset of planning one, participating in a fandom, etc. But then it got a bit dull: the fanfiction was written in the book – like pages and pages were literally the fic she was writing, and it was for a book that was made up in the Fangirl universe. I didn’t understand the point of it, really. I know there is a book called ‘Carry On’ also by the author that is set in the world the made up book is about, but from reading the fanfiction in the first book, I really have no interest in it. It didn’t grip me at all, and I was skimming those sections by the end, because shocker, they had nothing to do with the plot. I mean sure, I could see inklings of themes matching the ‘real world’ situation but they weren’t strong enough to warrant so much filler.

Another thing I disliked in the book is the overall message of ‘therapy/medication is a joke’, which I didn’t appreciate. The main character as mentioned has social anxiety, and her dad I’m pretty sure is bipolar, though I don’t think they label him as such. But throughout the book, Cath in particular kept mentioning how ‘they were in therapy when they were little and it sucked’ and now the whole family is against the idea. The dad in particular, from some of his behaviors throughout the book, should have been in therapy. Cath mentioned in passing how he’d randomly stop taking his meds and everyone seemed to be fine with that. Like ‘oh, Dad’s being Dad again’, not ‘He’s probably on a restricted substance and going cold turkey is a bad idea’. Like, none of it was even mentioned in a way that could suggest it’s something you shouldn’t do without medical supervision, and it really, really bugged me.

I did mention above though that I did like this book overall. I did. The main things I liked where the side characters: Levi, Reagan and Wren. All three of them were really cool, and honestly a lot more patient with Cath’s habit of trying to guilt or control the actions of others than I would have been. Levi, the love interest in the book, is a sweet pea. He’s so soft and pleasant. Reagan seems like a person I could relate to a lot more than Cath was, and Wren just seemed like a teenage girl who wanted to break out of her shell. Mind you she ended up going a bit too far, but that was called out and dealt with, the one thing that the family did health-wise correctly in my opinion. Goodness.

I also liked the plot and premise, though I think the ending fell a bit flat and there were weird side-plots that resolved in unsatisfying ways. But the overall story was pretty good. I just wish the main character would have been a bit more uh… well, a bit less controlling about everything that was going on throughout it.

Now that I’ve written everything out, it’s definitely clear that all the things I liked about the book were counteracted by the things I disliked. It’s basically even. The fast pace I was able to read it in really helped bump it from ‘neutral’ to ‘I liked it’ territory though. So a three star review from me it is.