Happy Monday! This is the only time I’ll say that because I’m still on vacation this Monday, so a happy Monday it is indeed, people. Next Monday is different and we’re denying it’s existence right now.

So for December, I received two books as gifts, bought three on my own, and then used gift cards I received as gifts to get the rest. So technically I went over my five, but hey, they’re gifts and we’re about to enter a new decade. I do not caaaaare. 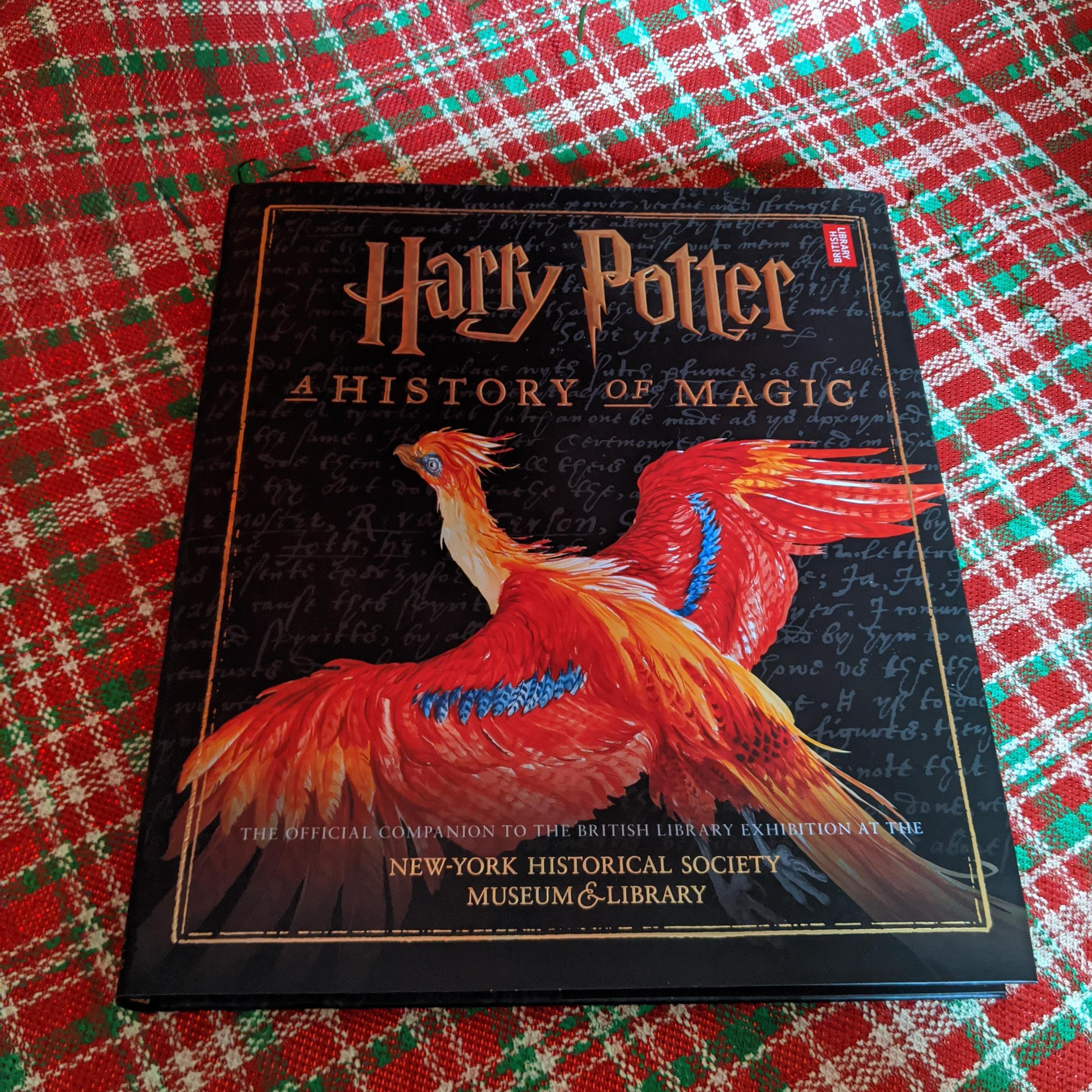 Harry Potter: A History of Magic – This book I got from my husband, and man, did he get creative with it. He’s the type of person who buys and wraps everything a day or two before Christmas, so all of the 23rd, he’s hiding in his office, and there are paper sounds and curses and thuds and all that and I’m in the next room reading, just listening to all this, right.

So he finally comes out with a pile of gifts for me, and there’s one that’s about three feet long, two and a half feet wide, and about eight inches thick. And I’m looking at it like ‘there’s nothing I asked for that’s that big, he has to have been creative and got me something else’. So he’s putting it under the tree and I’m looking at it and go, ‘Wow, I have no idea what that could be!’ and he looks at me and goes, ‘It’s a book, obviously!’ and I laugh and he laughs and the cat laughs and we move on.

Christmas morning, I open the honking huge package to find… two giant sheets of styrofoam, sandwiching paper towel tubes that have been taped between them. And on this inside of the paper towel tubes? This book. He had told me it was a book and we all laughed and it was actually a book. What a nerd. 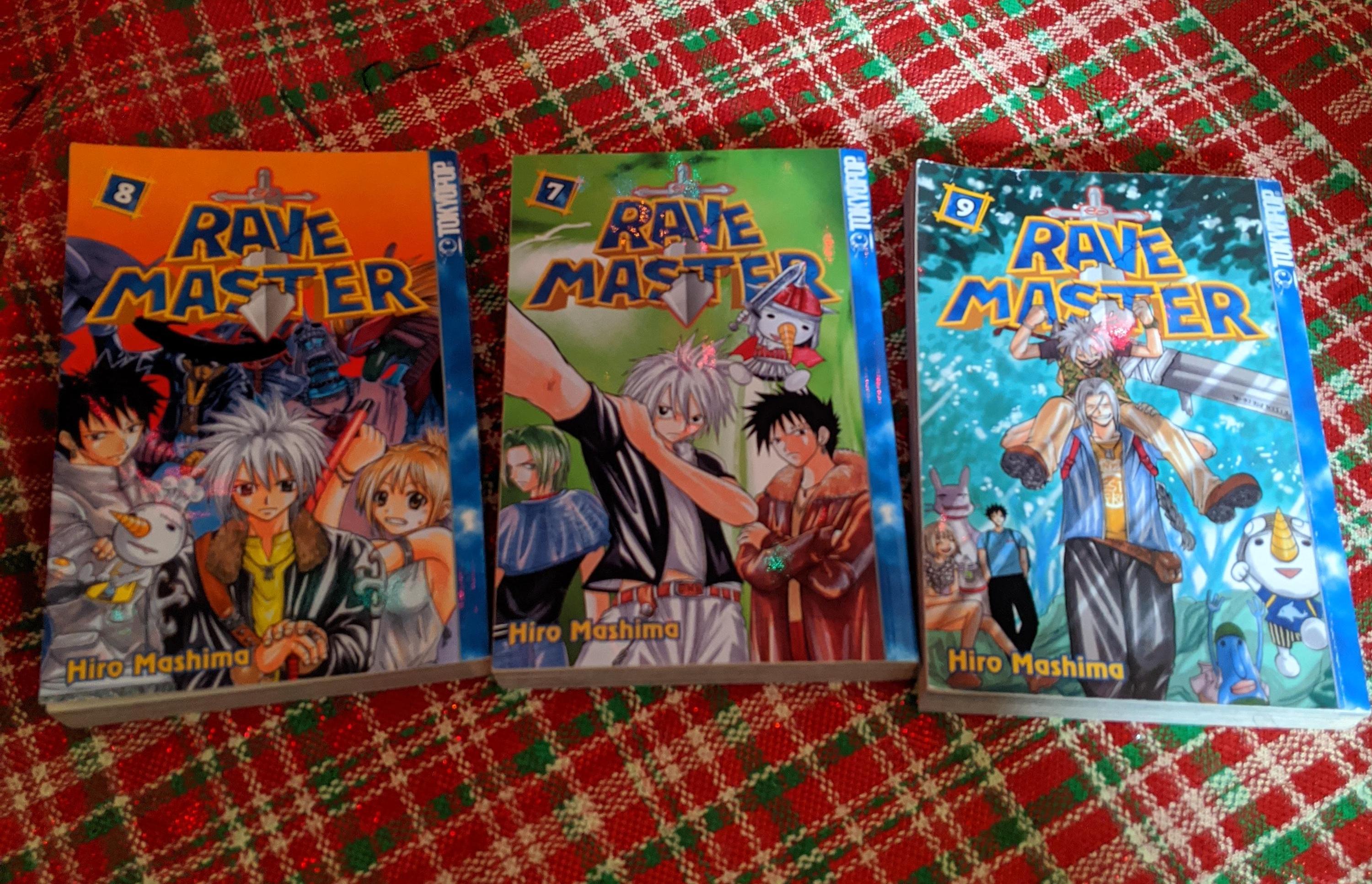 Rave Master vols 7-9 by Hiro Mashima – These three I bought myself. I picked them up second hand at Half Price Books! I’ve been collecting this series as I see it. It’s hard, as it’s out of print, but as of now, I think I have 1-9 and then 12! 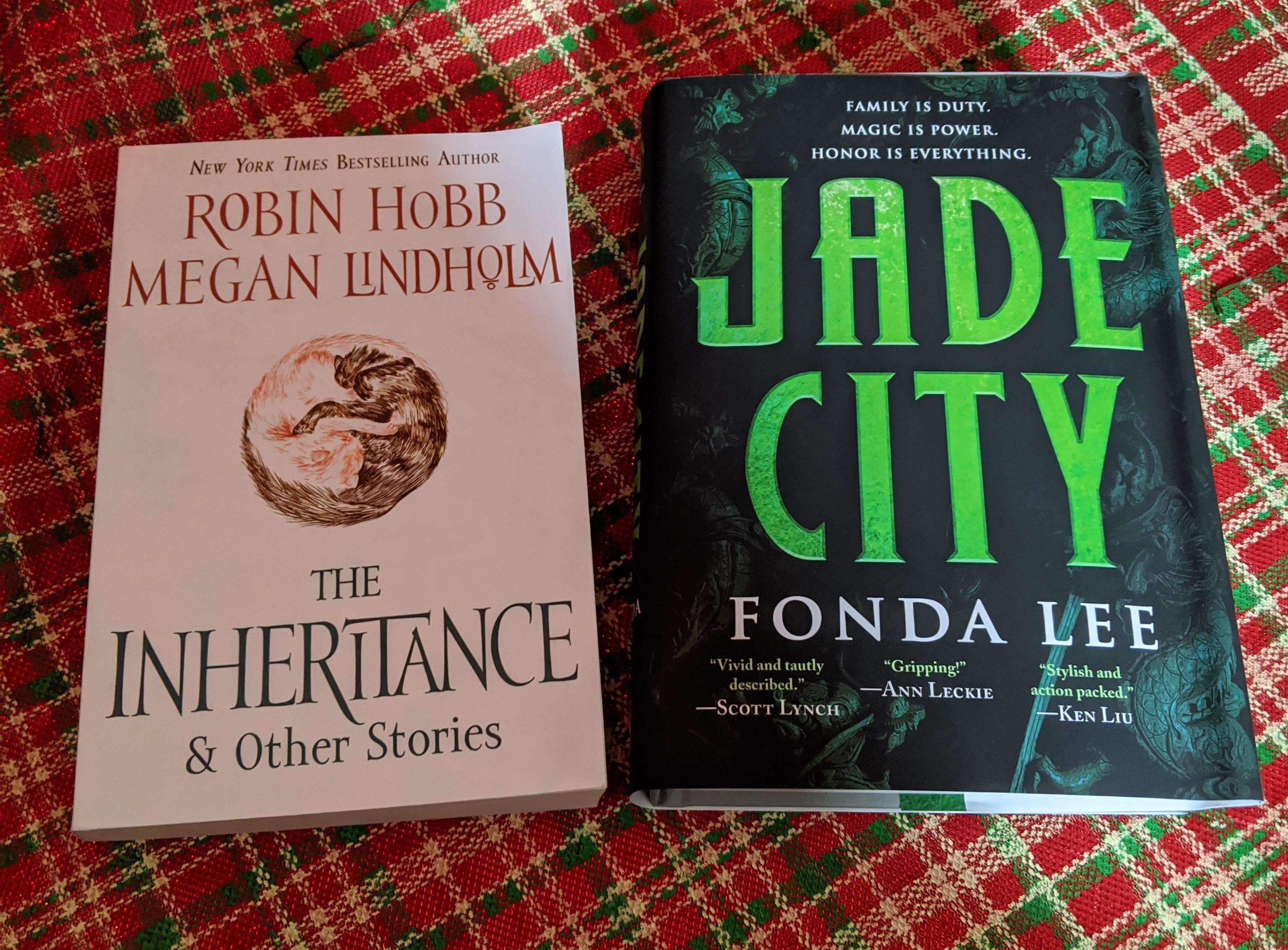 The Inheritance and Other Stories by Robin Hobb and Megan Lindholm – These are the same people, both pen names. But I picked up this in tangent with picking up The Wilful Princess and the Piebald Prince, which…. never arrived, waah. The seller contacted me and told me it was damaged in the mail and that they didn’t have a second copy to send me. Sad 😦 So I’ve re-ordered it from another seller, and it’s on its way, but it’s gonna be a bit. In the meantime though, I’m excited about this one.

Jade City by Fonda Lee– My parents got me this! 😀 It was on my books I hope Santa brings list, so I was v happy to get it. I’m pumped about it too! 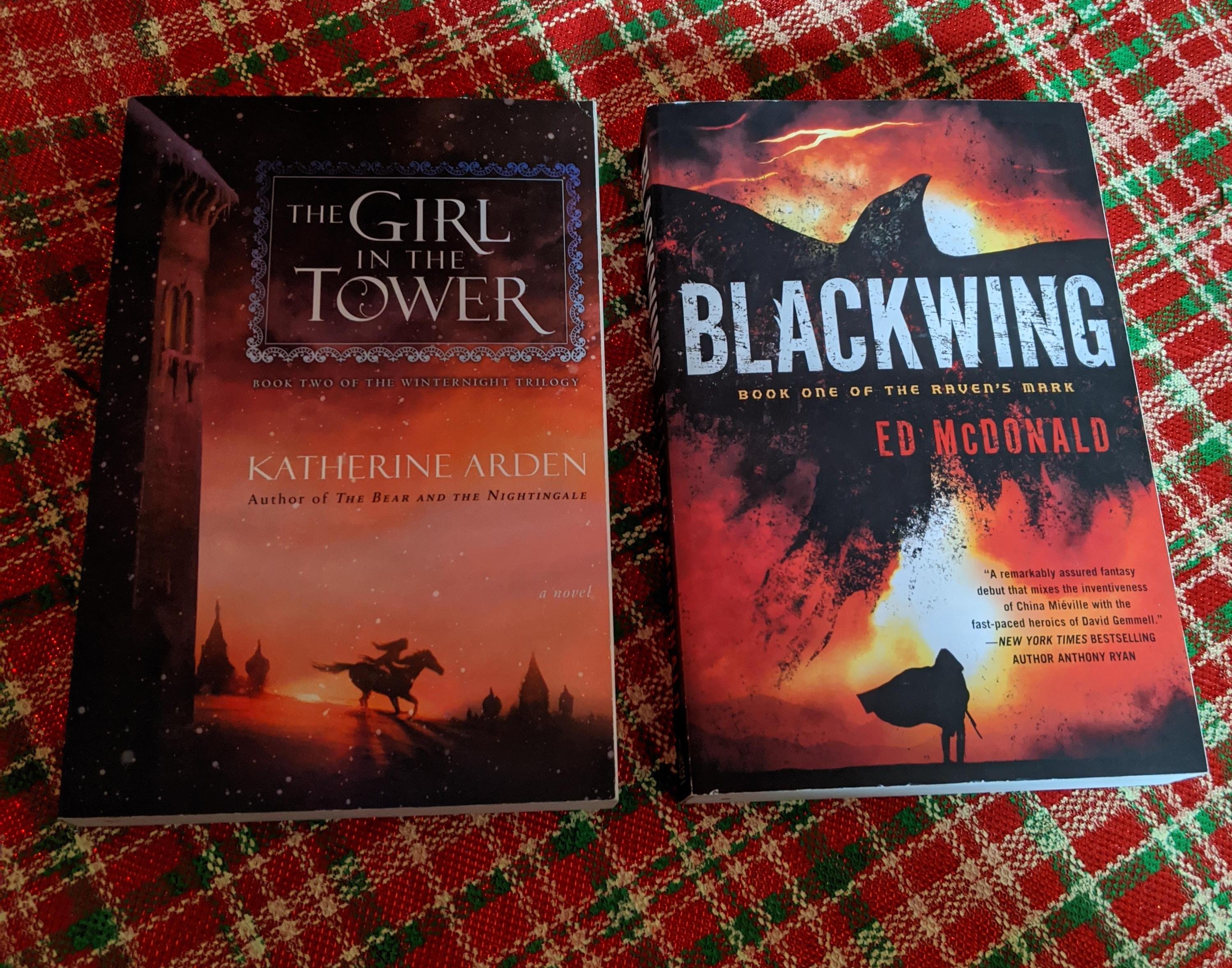 The Girl in the Tower by Katherine Arden – Second book in the series! I read the first earlier this year and really liked it, so I’m hoping to like this too. I got this for myself at Hpb.

Blackwing by Ed McDonald – Another Hpb purchase, I got this because I saw it and I had heard good things, soo…. it’s mine now. 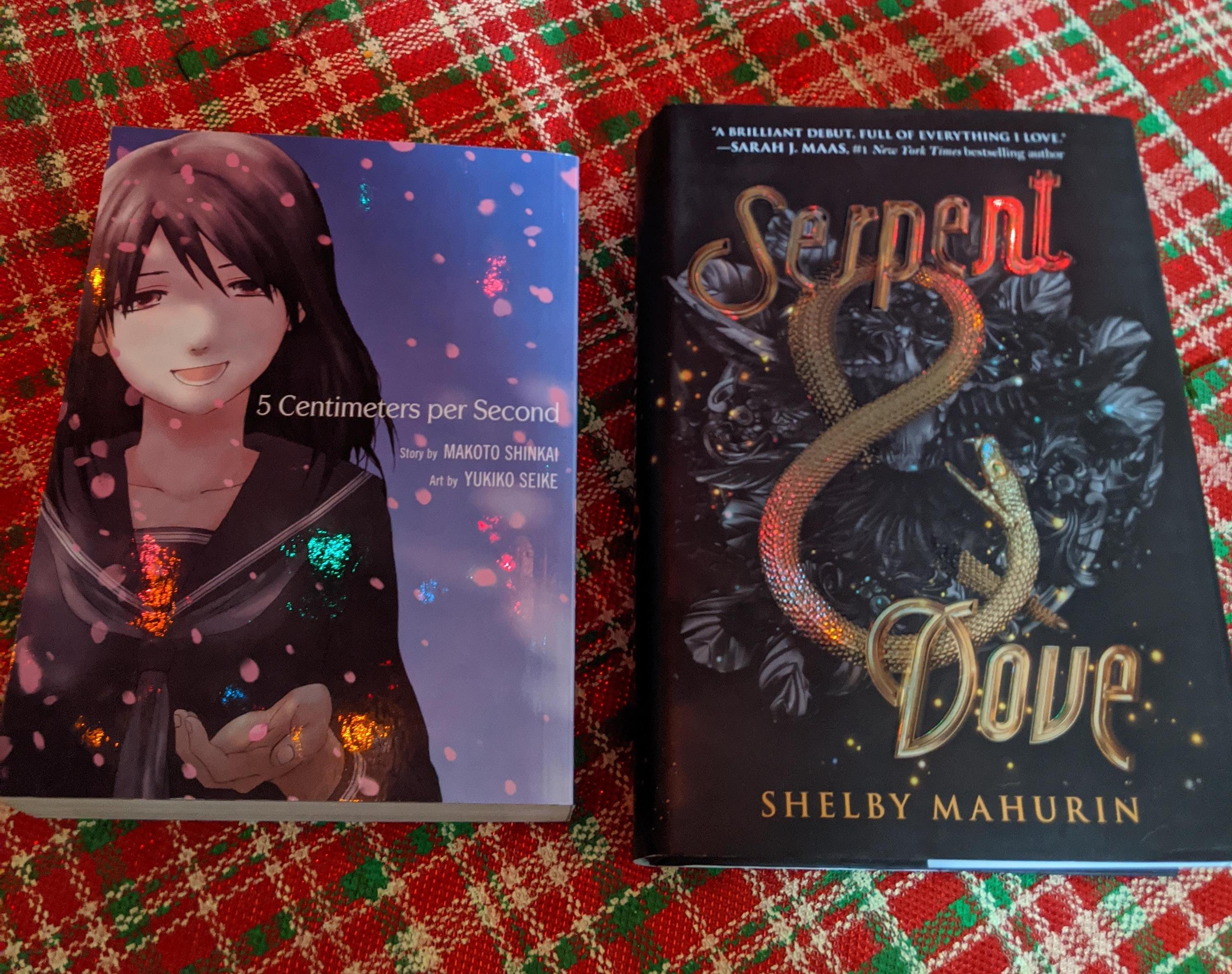 5 Centimeters Per Second by Makoto Shinkai – Picked this up with giftcards, so thanks, aunts and uncles! Honestly the only thing I know about this is that it’ll rip my heart, and I kinda wanna no nothing else until I jump into it. 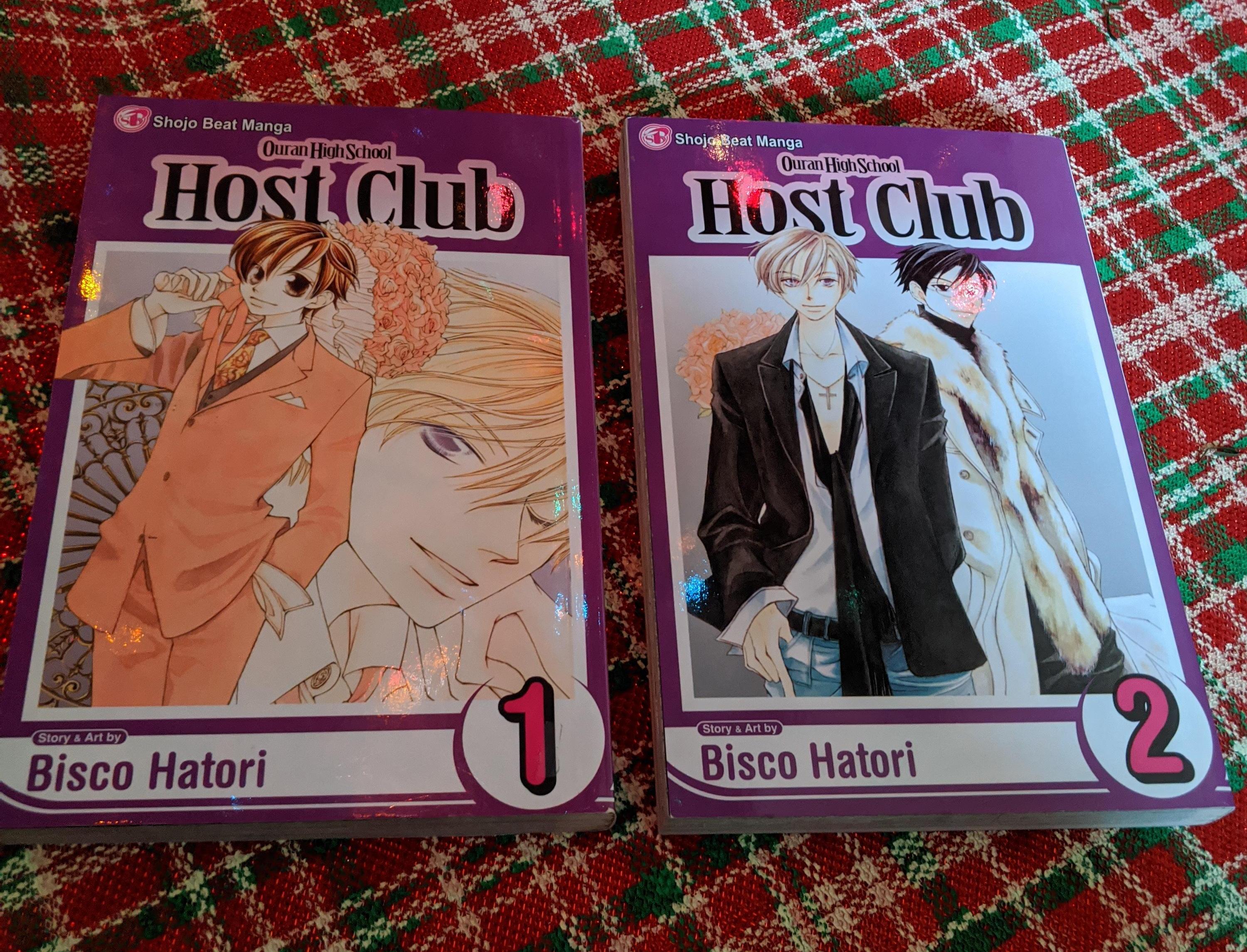 Ouran High School Host Club vols 1 and 2 by Bisco Hatori – Hpb buy! These are actually still in print. I’ve been meaning to pick them up for like… forever, and when I saw them for cheap I couldn’t refuse. I read this originally when I was in high school, so I’ve got the nostalgic factor going for them, big time. 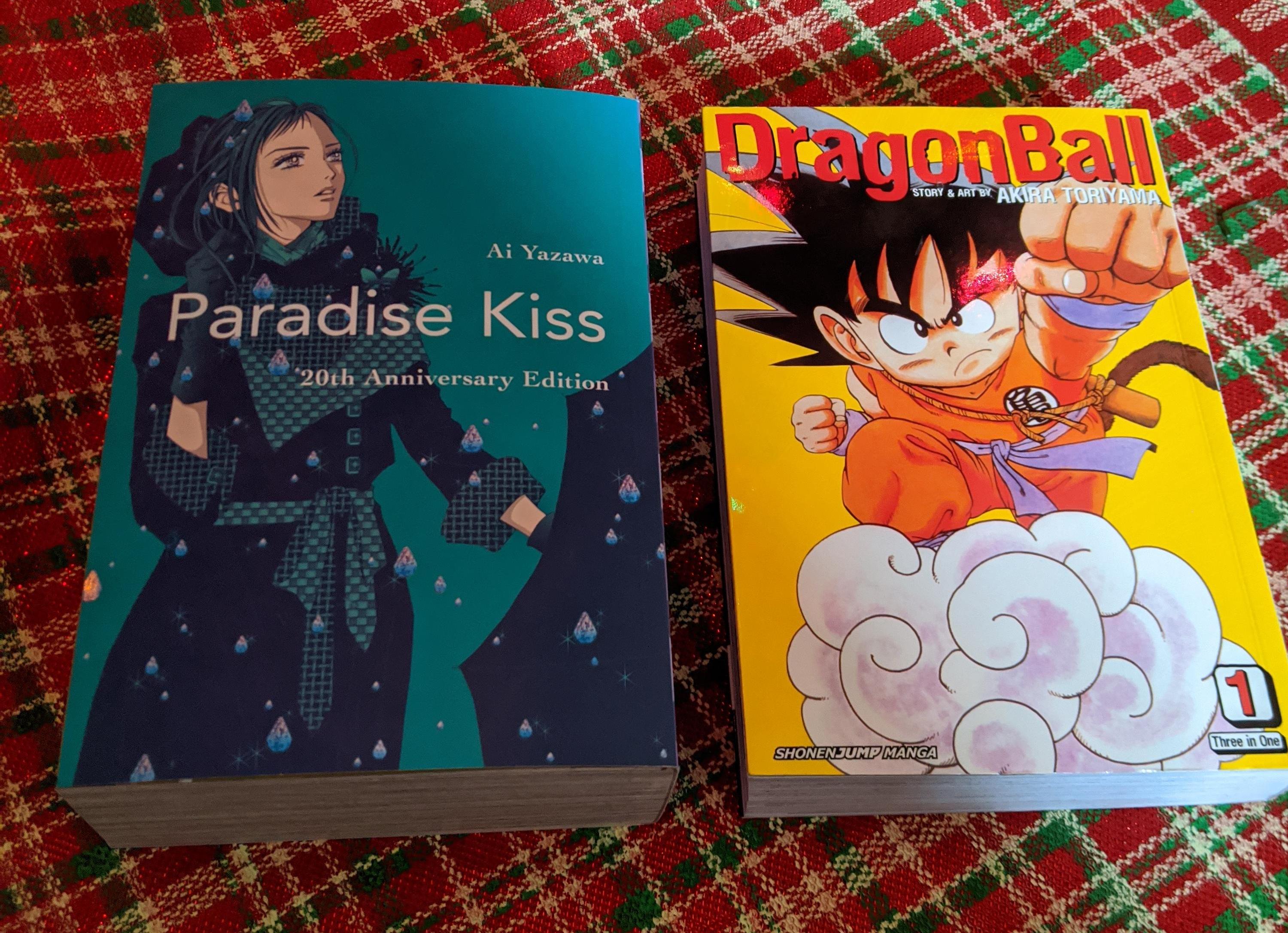 Paradise Kiss by Ai Yazawa – This is a gift card buy, and super nostalgic. A friend I had in high school loved this series, and I’ve since lost contact with her. I remember reading them and liking them, but honestly… I got this series just so I can remember her better. I literally have zero way to contact her. She had no social media that I can find and moved away from the area. -_- MELANIE, I MISS YOU. This is the bind up edition of the entire series and it is thiiiiick. 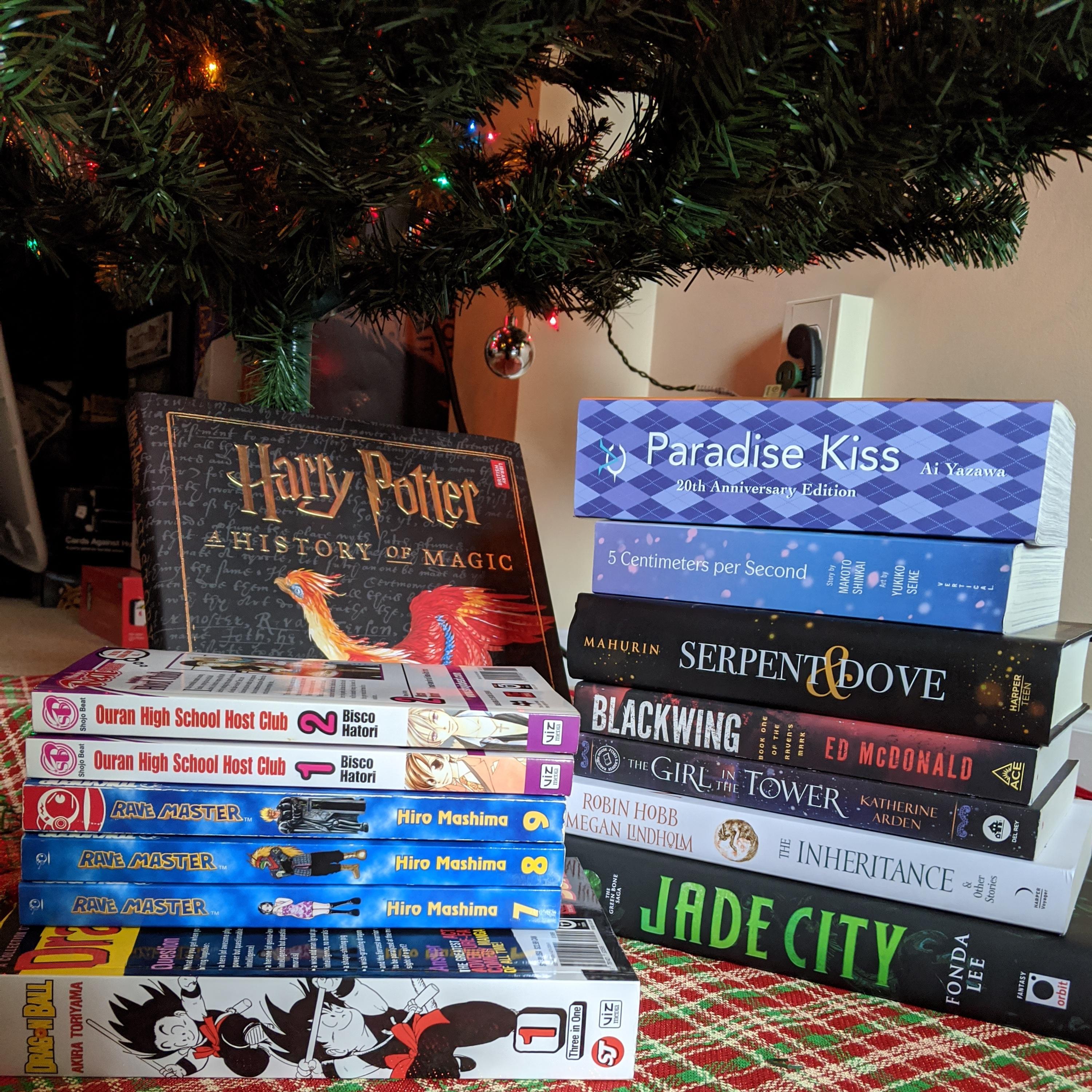 Also, when I was trying to take pictures of all these yesterday under the tree, my cat came over and reminded me why I can’t have nice things: 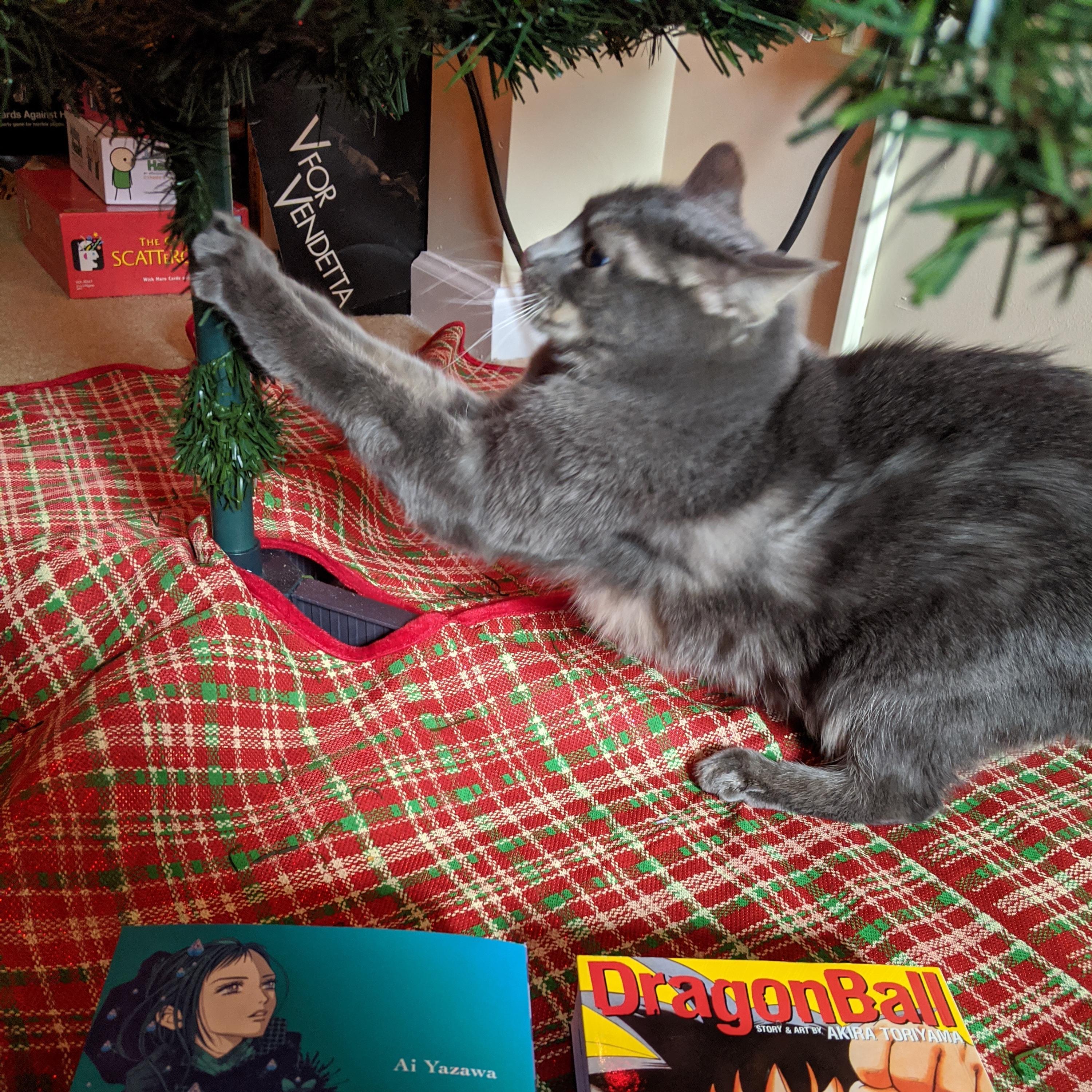