Today, I will be going over my reading year, my goals, my stats, and at the end I’ll be doing that ‘end of year’ survey thing. I’ll divide it by sections in case you’re only interested in bits and pieces of everything. 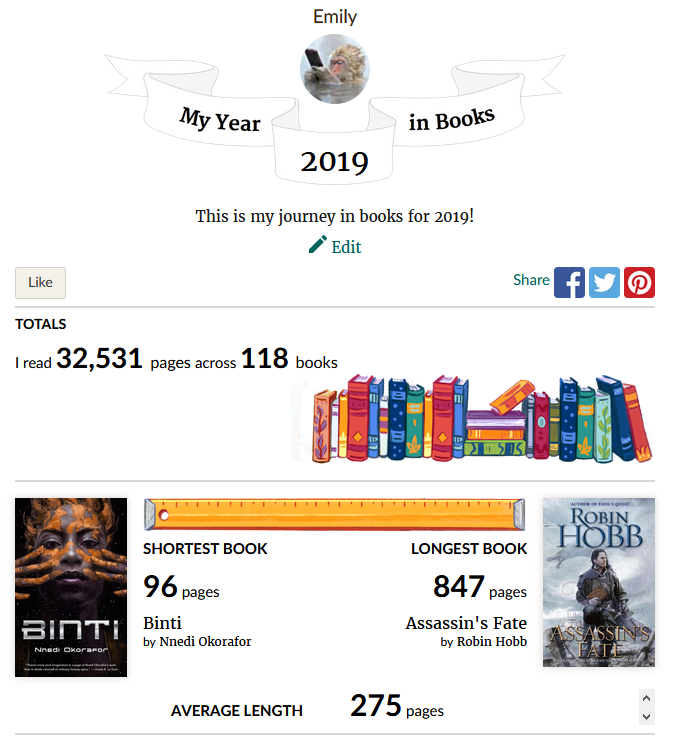 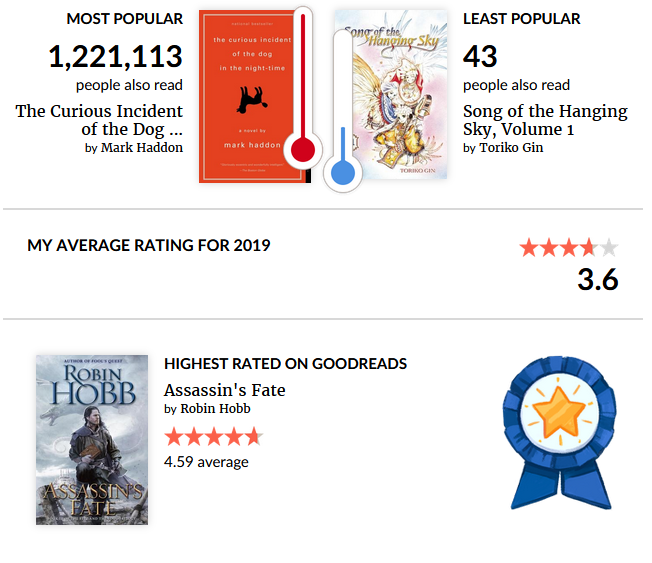 PS: If you wanna be buddies on Goodreads, add me, pal.

I was so close to this one. So damned close. As of writing this, I’m half way through the tenth and final book on the list, Interview with the Vampire, but with my schedule today (I’m technically writing this on the 31st), I know I’m not going to finish it. It’s just not feasible, unless I read every single second of time I have where I’m not socializing, and honestly that’ll make me hate the book, so I’m cutting myself a break. So when I do finish this book, I’ll consider this list ‘complete’. Nine out of ten though, that’s definitely the farthest I’ve ever gotten on one of these lists, and I’m proud of that.

Some months I definitely stuck to it. Some I didn’t. Here’s the breakdown:

On average, this is about four books per month, but I don’t wanna call it a win because I did go over a couple months, even if I stayed under overall.

I went on a two and a half month ban this year between April 1st and June 16th, and I didn’t falter the whole time.

I hit 249! This is pre-Christmas-gifts though, so it’s up by a couple again, but that’s ok. I hit it, and was sitting there comfortably on December 24th, haha

I’ve since started participating in the next one, finishing March 31s, 2020. That’ll be a resolution for this coming year.

If you’re interested, all except April and May have them because I was on a ban.

I maintained this part of the year, especially the last few months and the first few, but for a couple months I was kinda just floating:

I kept it up 6 out of 12 months, and for November and December especially, I’ve been doing even more posting than just three days per week. That’s why I’m marking this as not an utter fail.

Did I neglect this all year and than record everything in one afternoon a day ago? Yes. But I did it, dammit, I have the stats.

Out of the nine resolutions I had, I completed six, half-assed two and failed at one.

So I last-minute-to-complete-my-goal recorded a whole bunch of stats! Here they are! 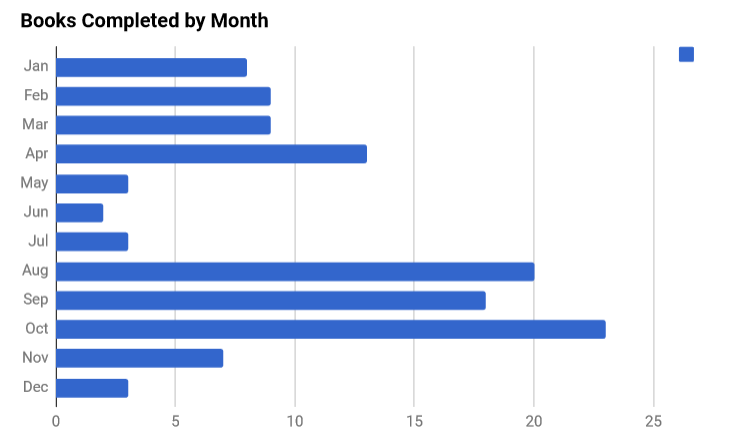 October was by far my best reading month – I read 23 things! That was the month I buzzed through the Kiss Him, Not Me! manga series, which was 14 volumes long, so this doesn’t shock me. 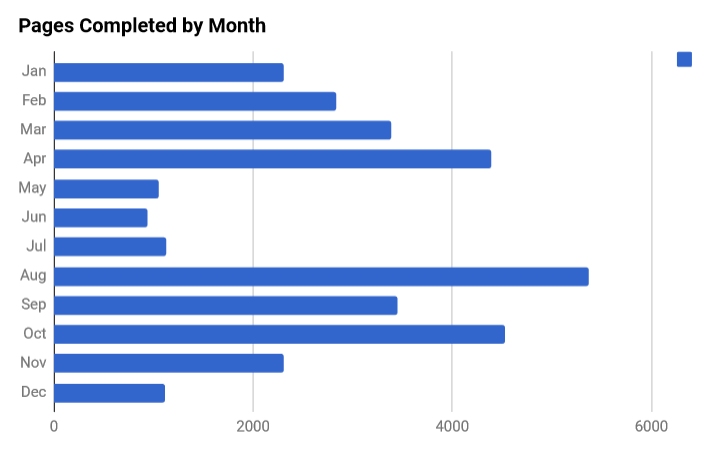 I find it interesting that while I read more books in October, I read more pages in August. October was mostly manga, August was mostly books due to the Newts Magical Readathon. 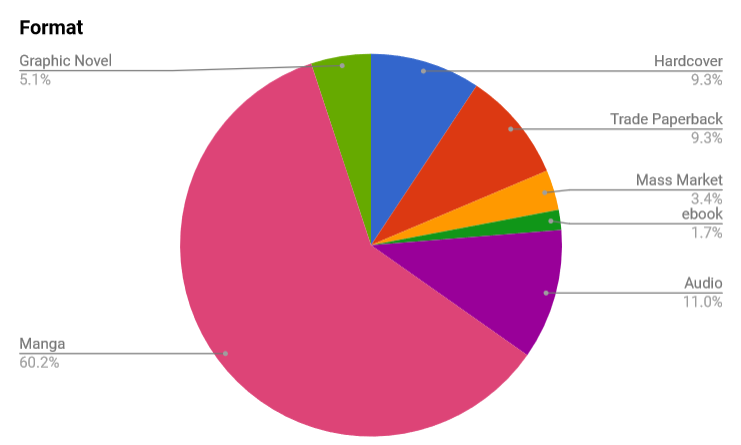 So out of the 118 books I read this year, format-wise: 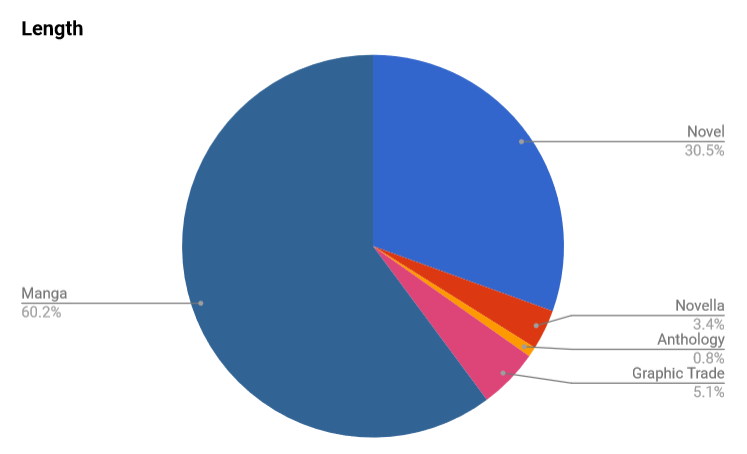 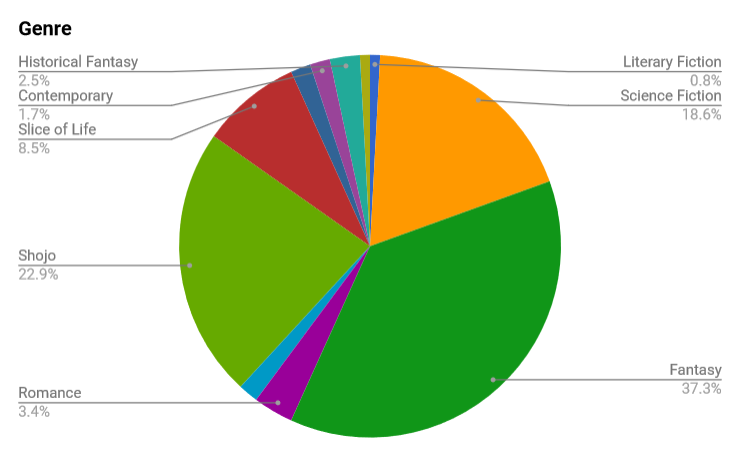 Genres! As usual, fantasy was my most read genre, but shojo manga made the second-most. What can I say, I’m a sap. Then there was sci-fi, slice of life, and then down from there. 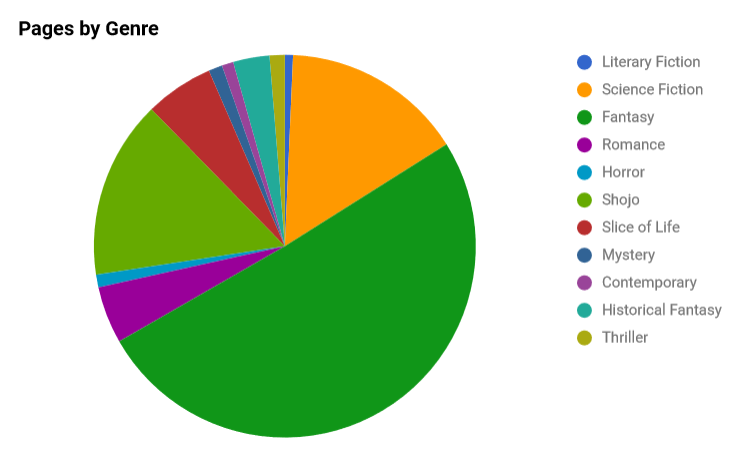 Page-wise the balance is a bit different. Basically half the pages I read this year were fantasy. They tend to be longer books, so this doesn’t shock me, haha 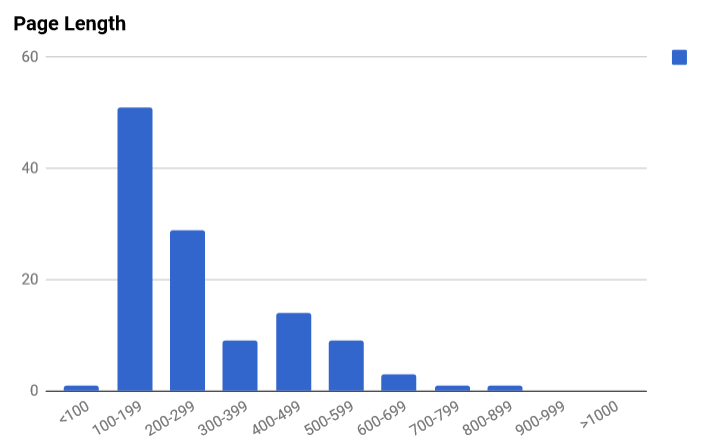 Length-wise, most of the books I read were between 100 and 200 pages, and this makes sense as I read like 60% manga this year. All the longs ones I guarantee you are fantasy. 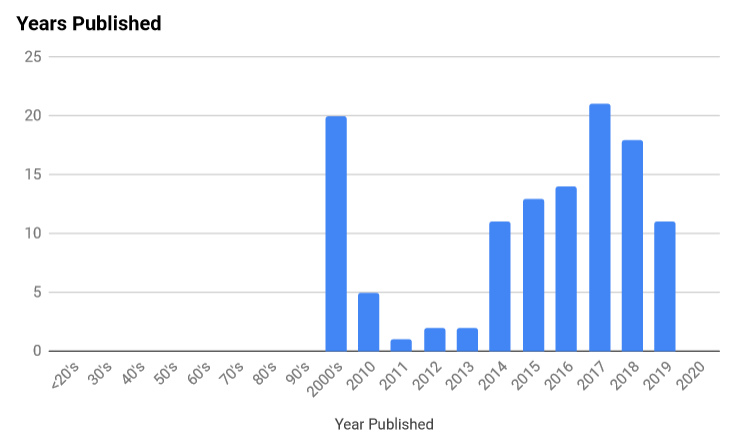 This I found interesting, mostly because my most read year was 2017, as opposed to 2018 or this year. And then there were a bunch published in the 2000s, and I’m pretty sure they’re mostly manga. No classics this year. 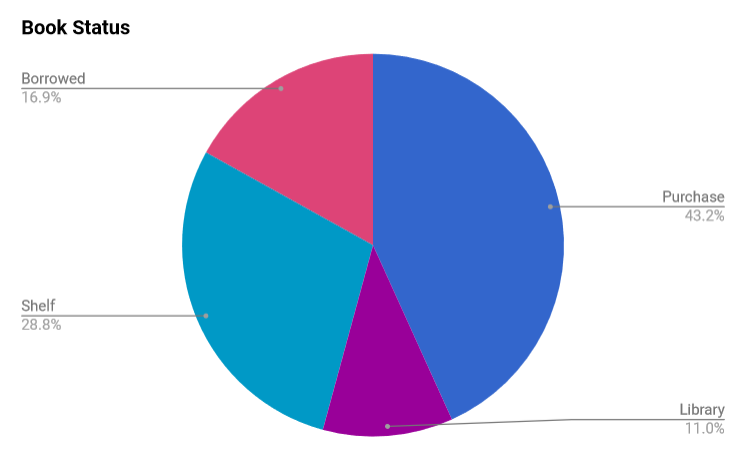 20 of the books I read this year were borrowed – either from a friend or from Scribd. All the audio books fall within this category. 51 were books I bought this year, 34 were ones I already owned from the previous year, and 13 were library books. 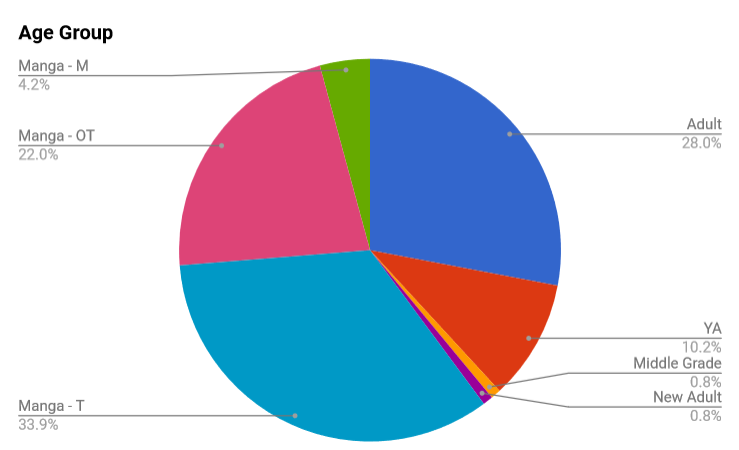 Age-wise, I read all over the place: 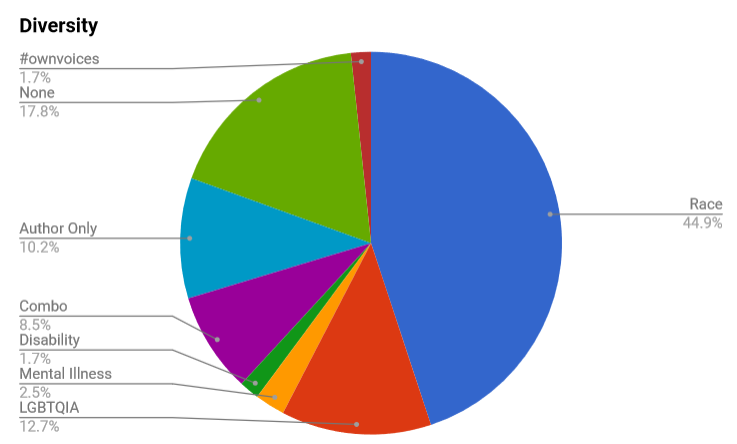 I apparently read pretty diversely this year, though honestly I didn’t try to do it on purpose. Like… I didn’t try to not read diversely either, I just picked up what interested me, and most of them happened to be diverse! So neat! Only twenty-one books I read this year weren’t diverse in some fashion. 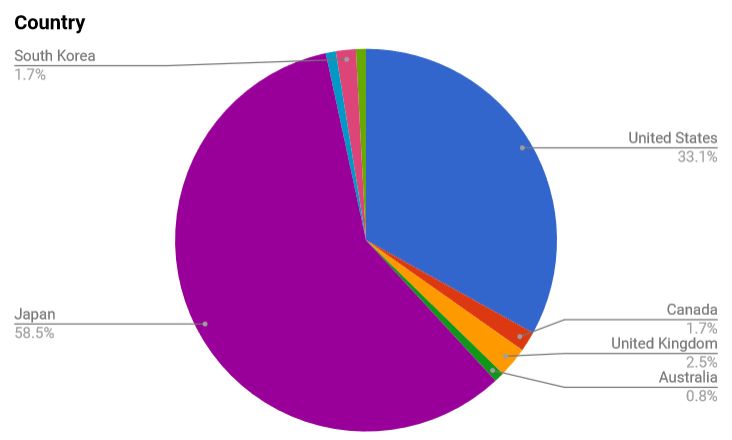 Author-wise, the most I read were from Japan, which, manga, makes sense. Then the US, and the UK making a very far-back third place. 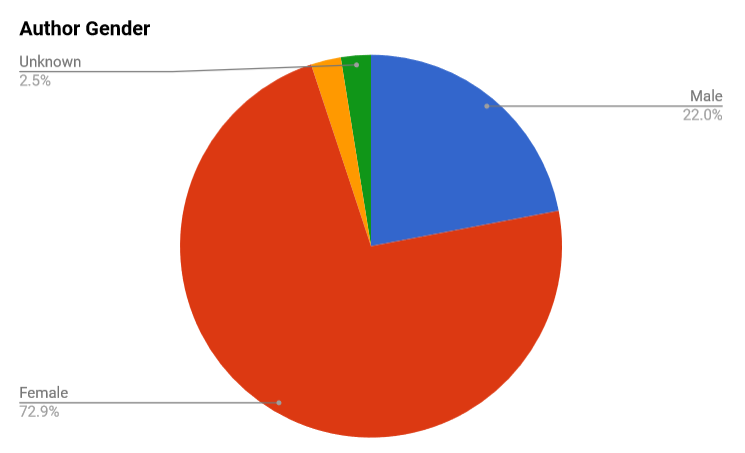 Author’s gender-wise, I read from mostly women, followed by men, and it looks like unknown and multiple authors were tied for third. 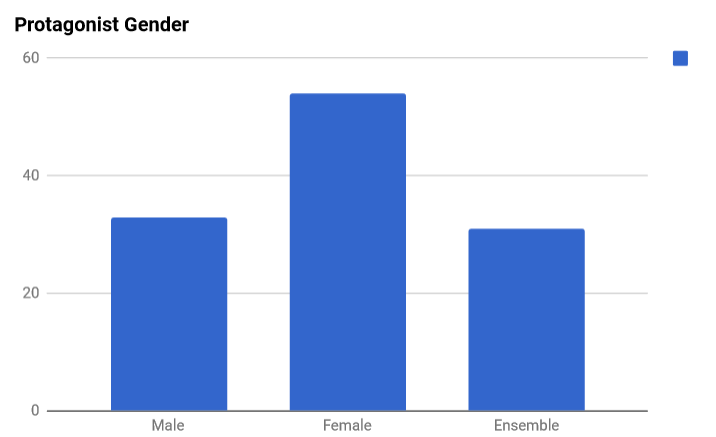 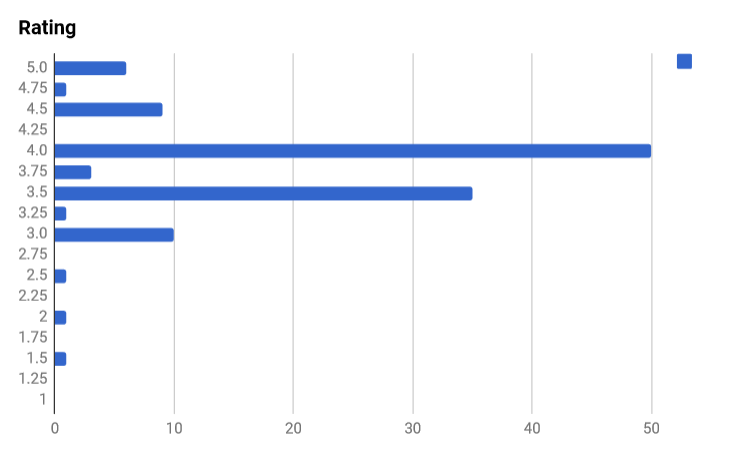 And finally, the ratings. I had mostly three to four star books this year. It makes sense. 3 stars for me is ‘I liked it’ and 4 is ‘I really liked it’. I reserve 5s for ‘this is a new all-time favorite’ so even if I love a book, I won’t give it a five unless I decide it’s a new favorite… which explains the 4.5s and the 4.75s up there. I did have a handful of new favorites this year though, which is great, and will be discussed in another post.

This was created by Perpetual Page Turner and I’m swiping it like Swiper.

Number Of Books You Read: 118
Number of Re-Reads: 4
Genre You Read The Most From: Fantasy

There are a handful, and I don’t wanna spoil them here because there will be a whole post about it. The suspense!

2. Book You Were Excited About & Thought You Were Going To Love More But Didn’t?

3. Most surprising (in a good way or bad way) book you read?

Illuminae, in a good way. I honestly figured it was going to be middle of the road for me, and then I ended up really liking it!

4. Book You “Pushed” The Most People To Read (And They Did)?

Dark Matter! I got two separate people to read it this year, yay.

Susan Dennard for sure. I’m on the third book of this series now and am enjoying it as much as I did in the beginning!

7. Best book from a genre you don’t typically read/was out of your comfort zone?

You. It was unsettling. I liked it for the most part, but maaaaan.

8. Most action-packed/thrilling/unputdownable book of the year?

Wild Ones, the entire series. I think I buzzed through the 10 volumes it has in what, three days? Maybe four?

I say this because I know I will: The third one is coming out, and I’ll need a refresher. 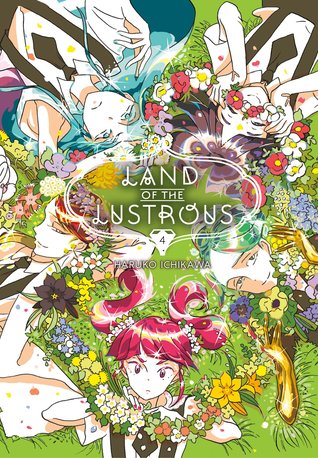 Temeraire the dragon from Novik’s Temeraire series. He’s such a puppy.

Life changing? Not really. Definitely though provoking though. I still think about this one, man.

It should be a modern classic, really.

I don’t have one…. I don’t really mark quotes and stuff I like. I should but I don’t.

See above! It’s up in the goodreads stuffs.

17. Book That Shocked You The Most?

I don’t have any! Pbtbtbt.

19. Favorite Non-Romantic Relationship Of The Year

Obviously the one between Fitz and the Fool. It’s so damned wholesome and I love it ;~;

20. Favorite Book You Read in 2019 From An Author You’ve Read Previously

21. Best Book You Read In 2019 That You Read Based SOLELY On A Recommendation From Somebody Else/Peer Pressure/Bookstagram, Etc.:

Based on a rec from Sionna @Bookinhereyes, and I ended up rather digging it!

25. Book That Put A Smile On Your Face/Was The Most FUN To Read?

This series is insane.

28. Book That Crushed Your Soul?

None! No soul crushers this year. Bit of a shame.

30. Book That Made You The Most Mad (doesn’t necessarily mean you didn’t like it)?

Probably the Manga Recs for Beginners one!

Went to Caliban today. Was quite lovely @calibanbookshop

Hopefully it shows up. Also, shameless plug to ig.

6. Most challenging thing about blogging or your reading life this year?

7. Most Popular Post This Year On Your Blog (whether it be by comments or views)?

Weirdly, it was my review on Silver Spoon! It must have been linked somewhere, because I wrote it back in January, but it consistently still gets a couple hits per day.

Honestly, I can’t pick one out!

Honestly the fact that more of my friends are readers than I thought were, haha

10.  Did you complete any reading challenges or goals that you had set for yourself at the beginning of this year?

…Scroll up and reread the top half of my post. :”D

I made a whole post about this the other day!

There will be a post on this too coming up, but a sneak preview:

4. Series Ending/A Sequel You Are Most Anticipating in 2020?

5. One Thing You Hope To Accomplish Or Do In Your Reading/Blogging Life In 2020?

6. A 2020 Release You’ve Already Read & Recommend To Everyone (if applicable):

And that – that is it. 2019 is done, 2020 is here, and it’s time to bounce into a new reading year. If you’re new here, welcome, I hope you think I’m neat. If you’ve been here for a while, thanks for sticking around – I appreciate you.

One thought on “2019: A reading year in review, statistics, the whole shebang”