It’s been a while since I posted, about since I made a post going ‘I’m gonna post consistently’. C’est la vie.

Today I’m gonna post about all the books I got this month, and I’m doing it a bit early because I’m going on a self-imposed mini ban, starting today through February 14th. Basically I got a lot this month and I wanna actually read a lot of them.

This is what I got: 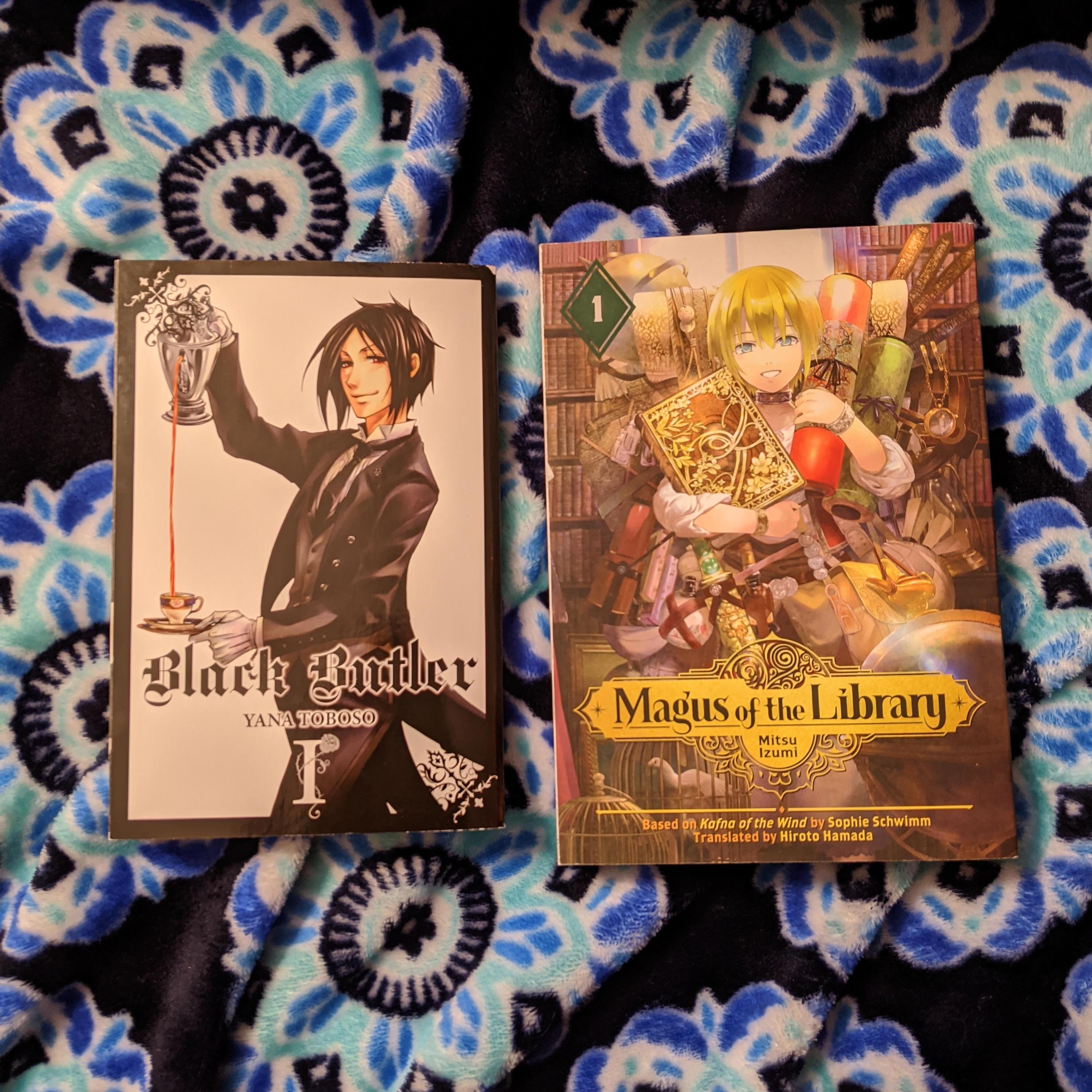 I’m really on a manga kick right now. And you’ll see this in my wrap up, but I’ve literally not read anything else so far in 2020. Maybe that’ll change by the end of the month, but we’ll see.

Black Butler vol 1 by Yana Toboso – Finally bit the bullet and decided to start this series. I watched the anime a while back and thought it was decent. I wanted to see the source material though and find out if anything had been changed between the two medias.

Magus of the Library vol 1 by Mitsu Izumi – Confession here: I have no idea what this is about, aside from a Magus and a Library. I picked it up because Katy @Bookbinderway really loved it and her tastes in manga overlap mine a lot, so, Katy don’t let me down. No pressure. 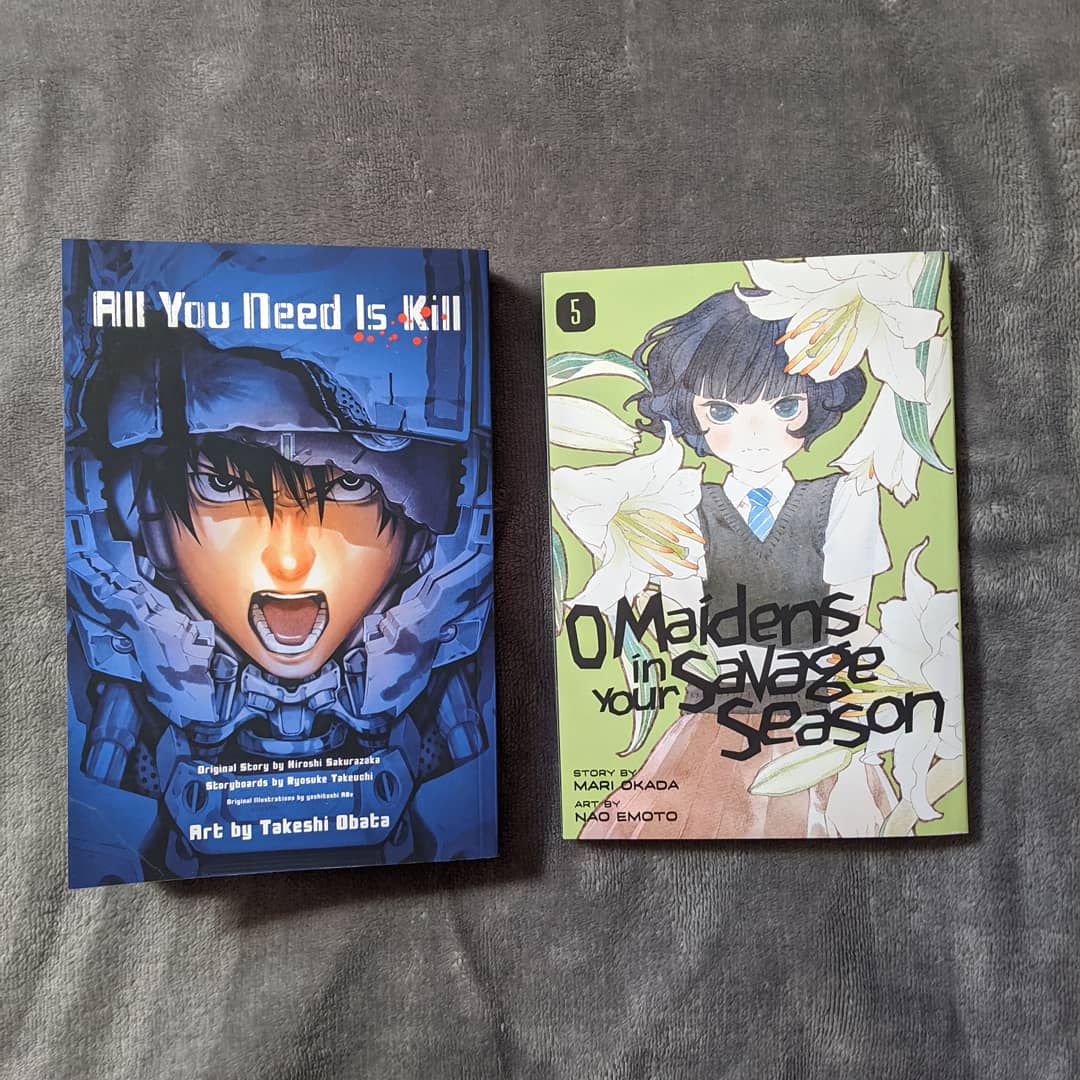 All You Need is Kill by Ryosuke Takeuchi – I’ve actually read this one. If you’ve ever seen the movie Edge of Tomorrow, that Tom Cruise ‘Live, Die, Repeat’ movie, this is the source material of that. The movie definitely took some liberties but honestly I thought it was pretty solid. This manga in my opinion is even better.

O Maidens in Your Savage Season vol 5 by Mari Okada – I need to reread the first four of these before hopping into this one. This is a recent favorite series, and I hope this volume keeps it up. 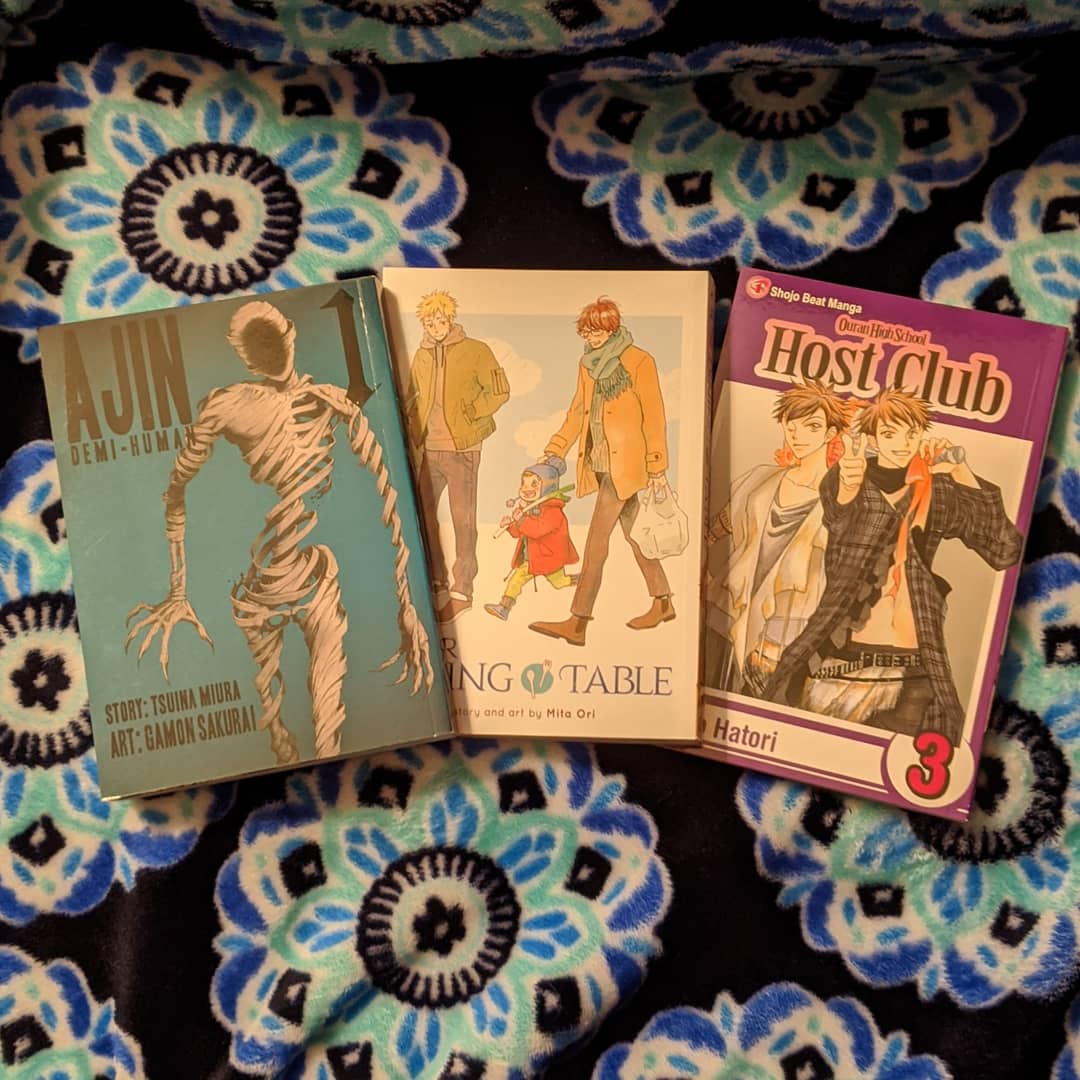 Ajin: Demi-Human vol 1 by Tsuina Miura – I picked this one up at the recommendation of my husband, who watched the anime and really liked it. I tried the anime, but I couldn’t get farther than like five seconds, purely due to the animation style. I didn’t dig it. The plot though sounds neat to me, so I’m gonna try the manga instead.

Our Dining Table by Mita Ori – This. This is my first five star read of the year. This is a little one shot, fluffy BL romance and it’s so damned cute. I loved this.

Ouran High School Host Club vol 3 by Bisco Hatori – Going through and collecting this still. I’ll read them eventually, probably after I have at least half of them. 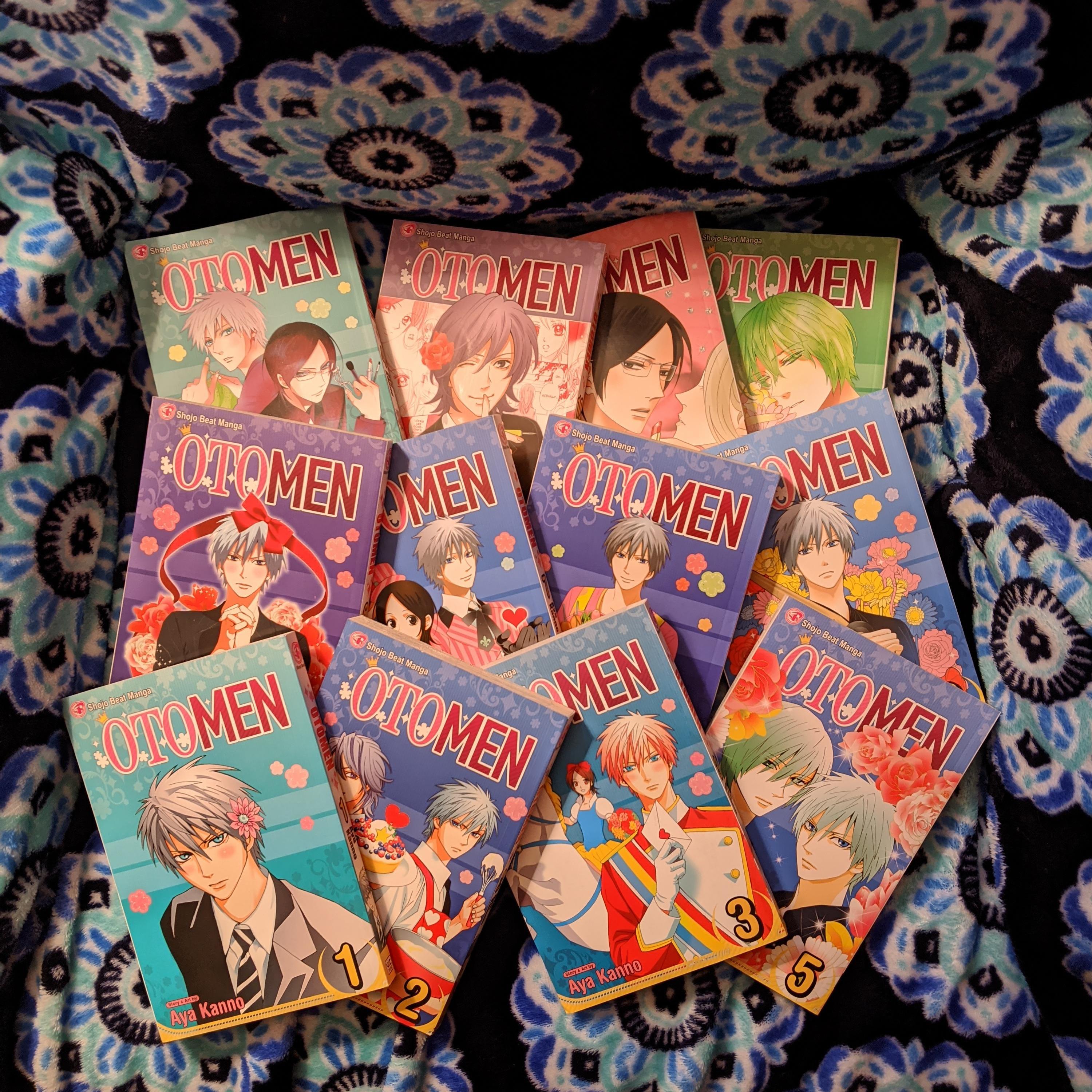 Otomen vols 1-12 by Aya Kanno – I’m also on a shojo manga kick and guys. Guys. This is one of the most ridiculous series I’ve ever read. I like it. I shouldn’t. But I do. I’ve read four volumes so far and literally in volume four a guys chucked a shark over his head. It’s. ridiculous. But I can’t stop, hahahaaa 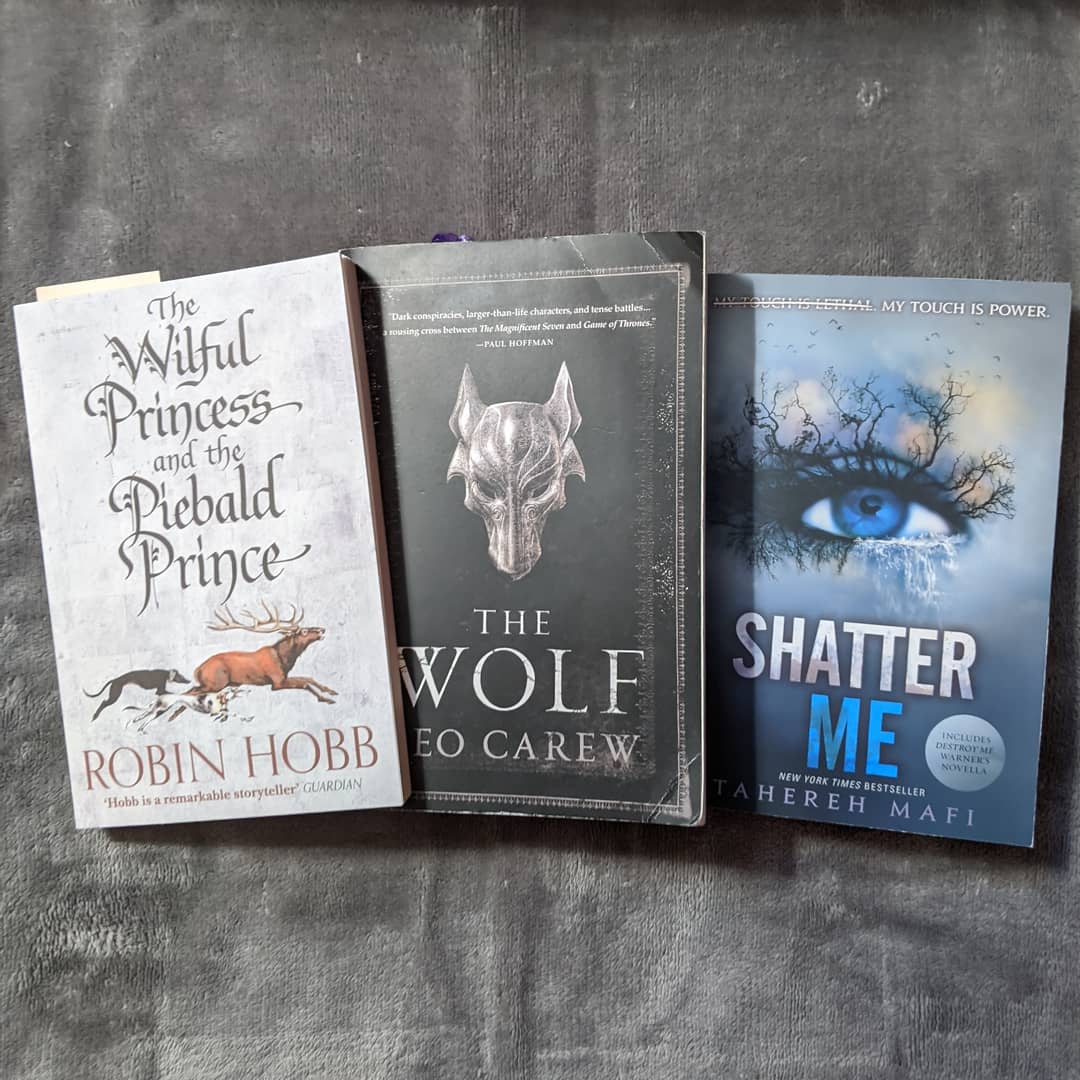 The Wilful Princess and the Piebald Prince by Robin Hobb – The trek I had to go through to get a copy of this damned book, man. I ordered it in early December, and it never came. Never came, never came. Then, I get a message from the seller going ‘so…. we received this book back – USPS returned it to us because it was damaged.’ and I was all ‘oh no, can you send me another’ and they went, ‘No 😦 that was our only copy’.

Cue me finding another seller, ordering it, aaaaaand…. it never came. Eventually, I contacted this seller, too, saying ‘what gives’. They respond with ‘we’re having trouble getting a copy of this from our supplier. Would you like to cancel or wait?’

As soon as I finished being mopey about it, I responded saying that if they can confirm the supplier is working on it, I’ll wait, but otherwise, I’ll cancel. Then I get an email with shipping confirmation, and the seller replies with ‘well it just shipped, so’.

It arrived. It’s above. That’s it. Goodness. I’ll eventually buddy read this with Zezee @Zezeewithbooks and it’ll be neat.

The Wolf by Leo Carew – My buddy got me this book! And then I dropped it twice and bent it up. Whoops. I’m still digging it though – I’m in the middle of it right now.

Shatter Me by Tahereh Mafi – Jumped on the bandwagon with this one. Honestly I’m not sure if I’m gonna like it or not. I hope I do, but we’ll see. 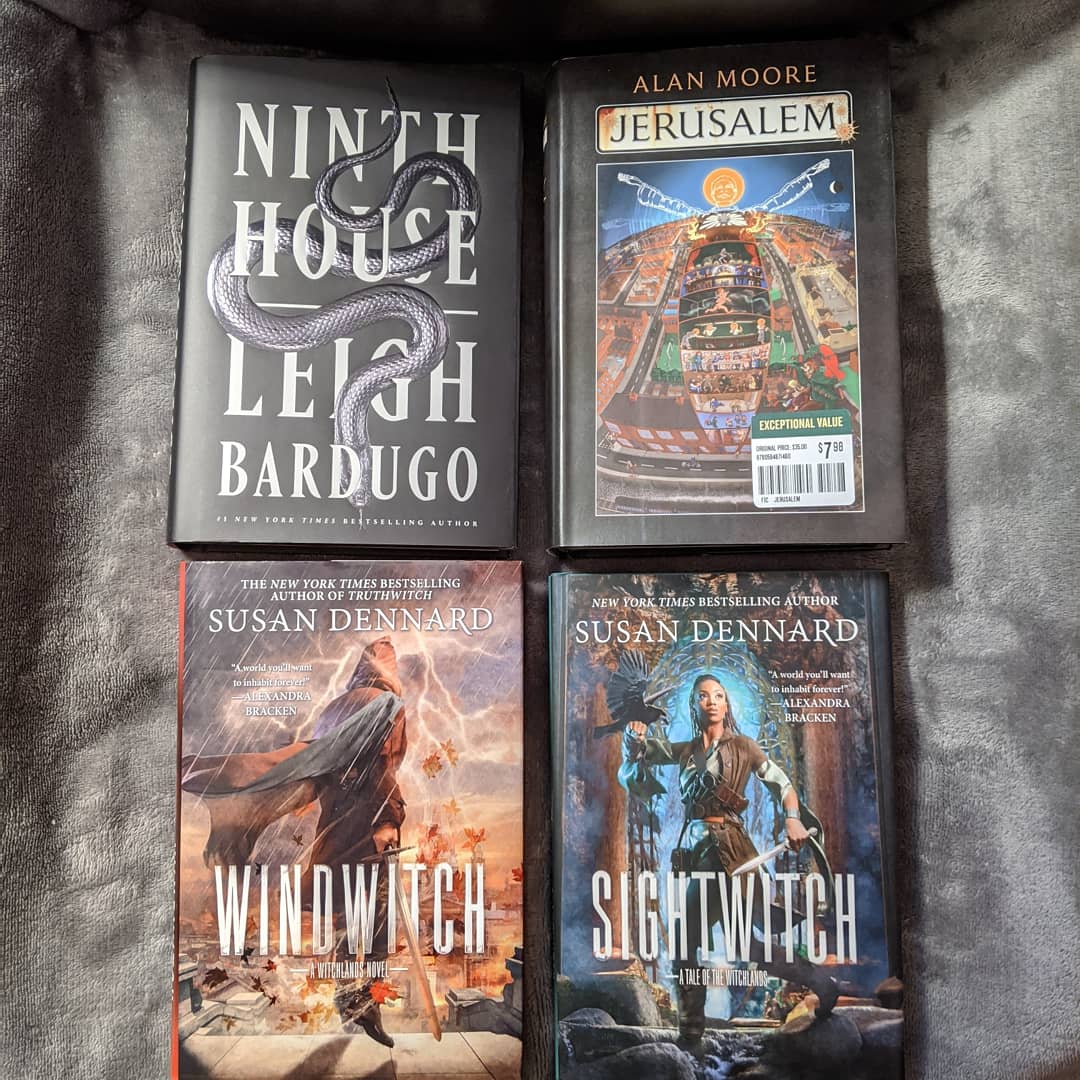 Ninth House by Leigh Bardugo – Bandwagon buy. Might be neat!

Jerusalem by Alan Moore – This is a bucketlist book. One of those ‘I’ll read it some day’ books, but I saw it for cheap, and I knew I wouldn’t see it that cheap again. PS I can’t get the damned sticker off without ripping the cover. So there’s that.

Windwitch and Sightwitch by Susan Dennard – These aren’t actually going on my TBR, as I’ve read both of them at this point via audio. But I saw them for cheap so I got’em. All I need is Bloodwitch now. 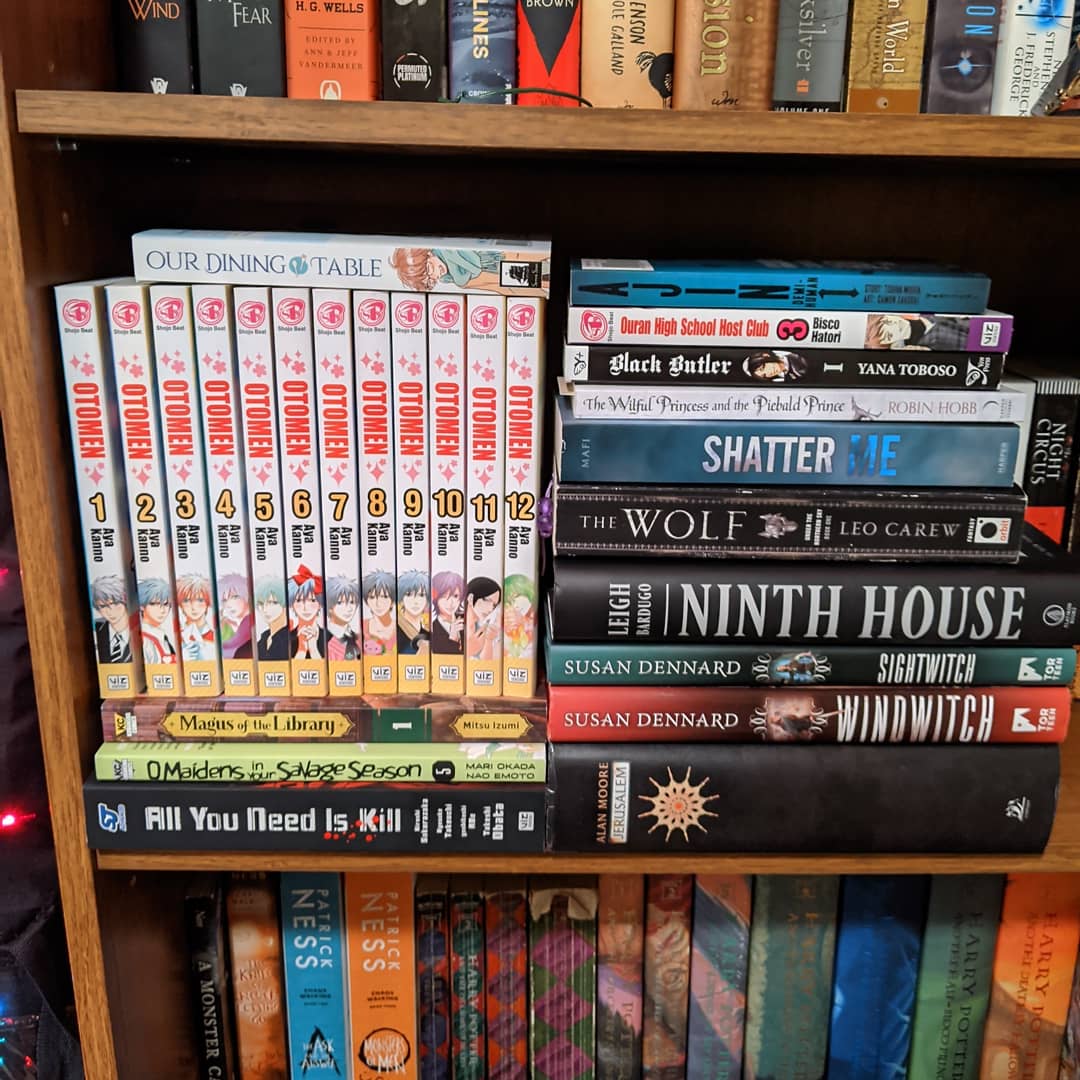 And that’s it! As you can see from above, I got a decent amount. On the plus side though, I paid list price for 0 of them, so pbtbtbt. Ban for me, then fun manga things which I’ll get into later. Peace!