Today is an exciting day! Today I am starting the Top Ten Tuesday meme, hosted by The Artsy Reader! I was missing a mid-week post topic for a while now, and looking at the future topics of this one, I figured it’d be a good match. I can’t guarantee I’ll always come up with ten, but the topic itself will still be worth while even if I only name a few. So, here we go!

I figured this was a good topic to start with. Forever ago, I made a Coffee Time post about what goes into predicting five star predictions. I’ve since almost finished those, so I’m gonna list the ones I still have yet to read and add some more! There will be a post eventually when all the books are read – those ones and these – talking about my expectations vs reality. Eventually.

First, the ones on my previous list that I’ve yet to get to:

The Way of Kings by Brandon Sanderson – As said in the original post, I don’t think I’ve seen anyone dislike this. And I tend to really like fantasy like this, so I’m hoping this one will be a five.

Caliban’s War by James S. A. Corey – This one I’ve actually read a good chunk of. I haven’t finished it yet, though. I made this prediction before I started the book, so pbtbt.

And now onto the new predictions. These were selected from the books I currently own: 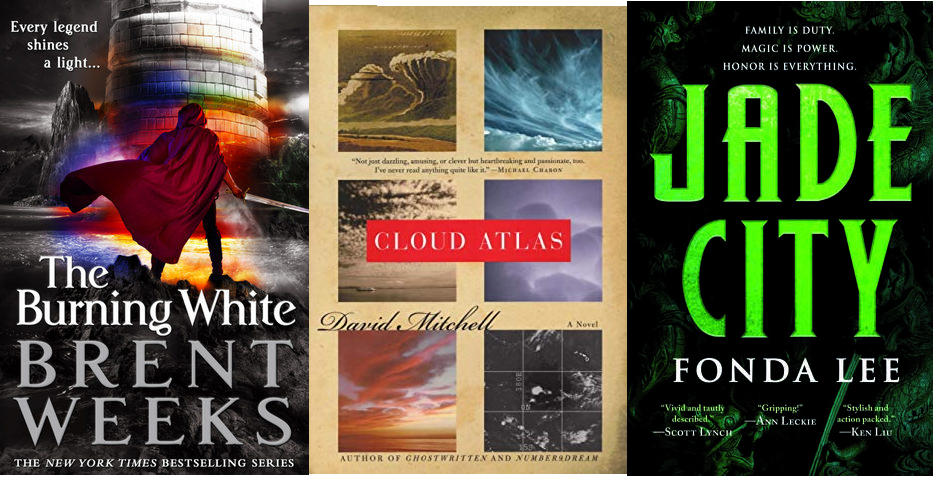 I could only come up with three! Shock! I went through the 250-some-odd books I own that I haven’t read and really, honestly, these are the only three I truly feel will be five stars. I’m not saying the others won’t, but these were the only ones that stuck out. Obviously I hope all my books are five star reads, but my average rating is 3.5 or so, so that’s unrealistic.

Anyways, The Burning White by Brent Weeks made the list because it’s the final book in the Lightbringer series. I’m in the middle of book four right now, and books 1-3 all got a five star rating from me. So this has a good track record in its favor.

Cloud Atlas by David Mitchell I think I’ll love mostly because I adore the movie. Like, I love this movie. It’s easily in my top ten, ever. And I haven’t read the book! For shame!

And finally, I chose Jade City by Fonda Lee, because… well, it’s a gut feeling. I can’t quite put my finger on it, but I just feel like I’m going to love it. I really hope I do.

And that’s it! My first Top Ten Tuesday post! Maybe next week.. maybe next week I’ll actually have ten books to talk about. :”D