Hi! Once again, I haven’t bought any books this month, just a ton of manga. I just haven’t been gravitating towards normal books for some reason lately, and I couldn’t tell you why. It is what it is though. 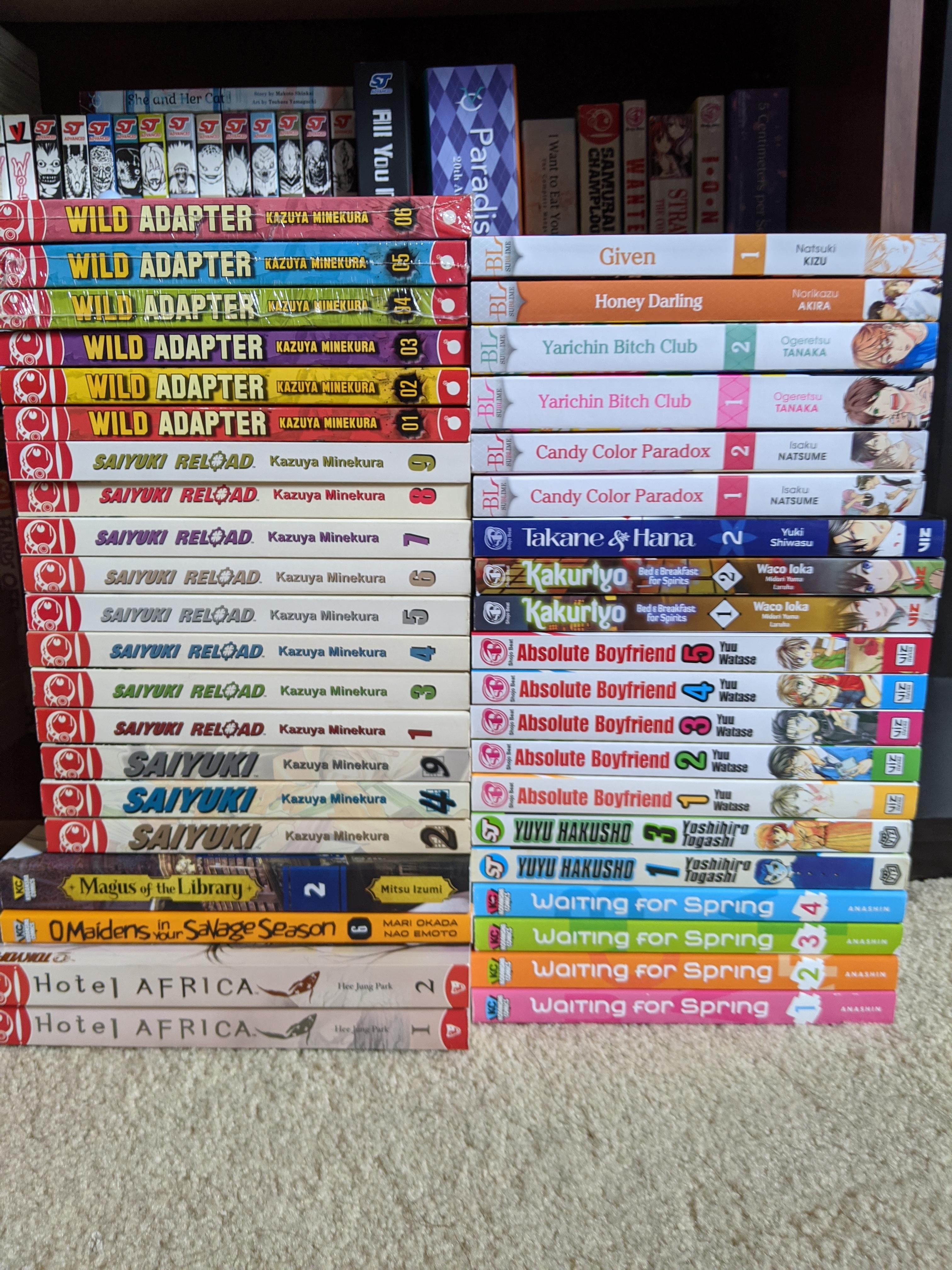 Wild Adapter vols 1-6 by Kazuya Minekura – I’m pretty sure this is the complete series. I know there’s technically a volume 7, but it was never translated into English, and I’m fairly certain it’s like a ‘bonus’ volume, not directly tied to the plot of the first six. I’m really hoping I’m right though, because getting done with volume six and finding that the plot doesn’t resolve like I expect it to will be annoying, hah. Technically I read this back in high school but I do not remember a single thing about it. (And actually, I think I’m technically only haulings vols 4-6. I’m pretty sure I had 1-3 before this month)

Saiyuki vols 2, 4 and 9 and Saiyuki Reload vols 1, 3-9 by Kazuya Minekura – Same author as Wild Adapter, this series is out of print. So I’m collecting the volumes as I see them. Reload is the sequel series to the original Saiyuki, which has nine volumes. I think Reload has a tenth volume that was never translated into English so I’m not looking forward to that. The original series I’ve already read multiple times, just never picked up my own copies, and Reload I think I’ve read up through volume 6 or 7.

Magus of the Library vol 2 by Mitsu Izumi – This one I picked up because a friend of mine is a bit crazy about it. Turns out I rather like it too – it’s a fantasy where librarians hold power and books are coveted, and it’s like a reader’s wet dream. I really like this one so far!

O Maidens In Your Savage Season vol 6 by Mari Okada – Every time I pick up one of these, I sing its praises. I really like how this series delves into a teenage mindset when the brain’s experiencing all these new things and its being overly dramatic about it. It’s hilarious and endearing and I wrote a glowing five star blabber on volume 1, should anyone be interested.

Hotel Africa vols 1 and 2 by Hee Jung Park – This is another one where I read the first volume and absolutely adored it. When I read it though, it was a borrowed copy from a friend. But now I have my own, and volume 2 to boot! I’m very excited about these ones.

Given vol 1 by Natsuki Kizu – I gotta tell ya, I picked this up and read it because I love the anime. And while I did enjoy this too, I think the anime is actually a bit better. I don’t mean content-wise, they’re pretty lined up with each other – but I mean exhibition-wise. This is a story surrounding music. It was nice to actually hear the music, hah. The art in here does a really good job of emphasis though, I was always able to tell how a song was affecting a character, but unfortunately I obviously couldn’t hear the song. I’m still gonna collect this because I did enjoy it, but man I gotta rewatch the anime now.

Honey Darling by Norikazu Akira – This is a one-shot romance between a vet and a guy who is clueless when it comes to taking care of a kitten. This was short and sweet and I rather liked it.

Yarichin Bitch Club vols 1 and 2 by Tanaka Ogeretsu – I don’t really know how to describe this series other than ‘utter insanity’. It’s so damned entertaining though, and I found myself laughing out loud multiple times throughout the series. Volume 3 is out now I think, so I’ll be picking that up as well sometime in the future here.

Candy Color Paradox vols 1 and 2 by Isaku Natsume – This one I actually just read the first volume of yesterday, and I rather enjoyed it. This was definitely an impulse-buy. Rightstuf has sales right and I like the sales but you get free shipping at 50 dollars and who doesn’t want free shipping? So I got these to get free shipping, and I’m happy I did! This is super cute.

Takane & Hana vol 2 by Yuki Shiwas – I’m kinda iffy about this series, because it has the potential to go one of two ways: Super wholesome or super creepy. And I’m just crazy enough to find out. If it ends up going creepy I’m gonna drop the series like a stone, so I’m holding out hope for some wholesomeness here.

Kakuriyo: Bed & Breakfast for Spirits vols 1 and 2 by Waco Ioka – This one I actually just wrote a blabber on yesterday! This series reminds me of Spirited Away, but a bit darker I guess? It’s whimsical and slightly unsettling and I really, really like it so far.

Absolute Boyfriend vols 1-5 by Yuu Watase – Volume 6 is on back order, so I hope it shows up someday. This series I picked up because I read it in high school and remember thinking it was hilarious. It follows a girl who orders a robot boyfriend… and then doesn’t make the payments on him. It’s absolutely nuts and so entertaining, and I hope I like it this time around as much as I did the first time.

Yu Yu Hakusho vols 1 and 3 by Yoshihiro Togashi – Technically I’m rehauling my own old copy of vol 1 – I used to own it a while ago, and then gave it to my sister. Well, she gave it back, along with volume 3. I’m hoping to collect this whole series. It’s out of print so wish me luck.

And that’s it! I might actually buy a book next month – the Hunger Games book is out, and I want it. We’ll see if I reread the originals in time, though. Happy reading!