Happy Sunday! Today is another post about where books I’ve hauled have ended up. This is the sixth time I’ve done this so it’ll be on book haul number six, originally posted Feb 28th, 2016.

These are the books I hauled: 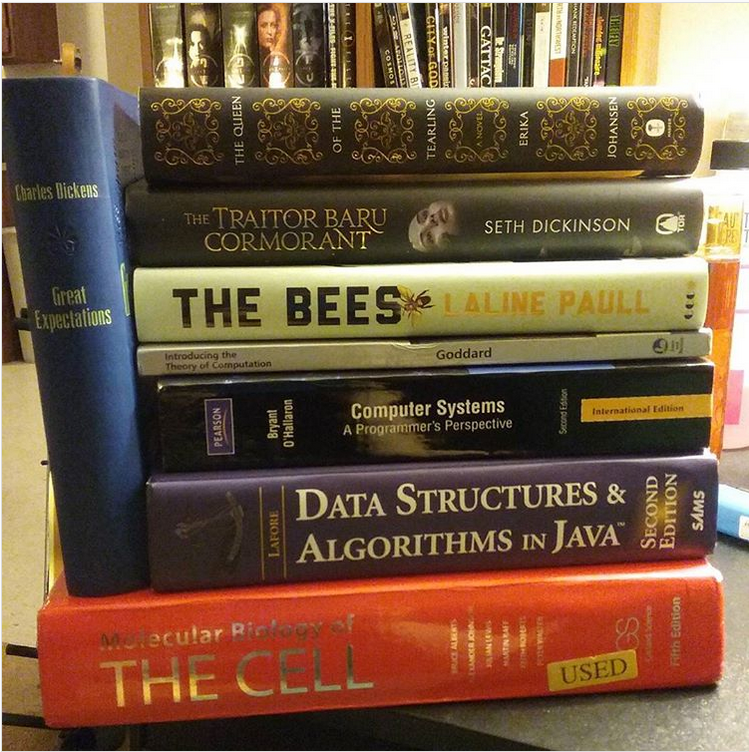 You can see I was in the midst of my compsci bioinformatics degree during this haul. The textbooks are everywhere, ahah. I hauled them because I was mad at having to spend so much on them in the first place. We’ll do those first:

The Molecular Biology of the Cell – Owned, read

This obviously was for molecular bio. My study method included taking notes in the book itself during lecture on the relevant pages, and then later combining info from the book and info from the lecture into organized notes. So I basically read this cover to cover, along with all the other textbooks I’ll be listing.

This was for a data structures coding class. One thing to mention: I learned to code using Java but honestly I haven’t touched it at all since then. C# and Typescript for meeee

Tbh I kind of hated this class. It’s fiiiiine. Why do I still own all these books? Well… honestly I don’t really know. They’re a bit outdated now. Probably because I spent so much on them and I’m still mad about it.

And on the other hand, I really loved this class. It was more philosophy than anything. All sorts of logic puzzles and stuff.

Honestly I don’t remember what this one was about, other than it being from the perspective of a bee, I think. I remember wanting to read it when I bought it though and it’s survived probably ten or fifteen purges, so… I think it’s meant to be (bee, geddit). I’ll read it eventually.

This book became one of my all-time favorites, along with the sequel that was released a year or so later. The third one is actually coming out this summer and man am I p u m p e d.

The Queen of the Tearling by Erika Johansen – Owned, read

I actually bought this copy for cheap when I was in the middle of reading a library copy. So technically I’ve only read the last half of this physical copy. But it still counts, dammit.

Once upon a time, I used to tell myself that ‘yeah I totally love classics’ when in reality I don’t. I don’t dislike them, mind you, I just don’t gravitate towards them. So one day I will pick this up, I just don’t see it happening in the near future unless I’m peer-pressured into it.