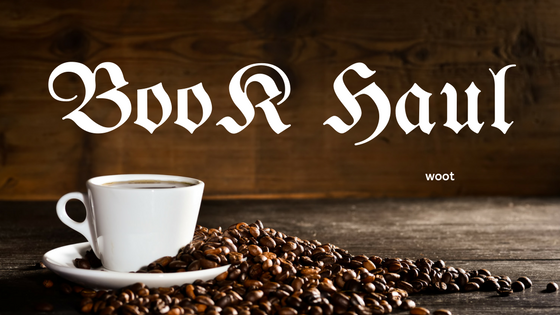 Happy almost-July! I actually bought books this month along with my manga, so I’m back to actually titling the posts as book hauls instead of manga hauls. Where I live, the bookstores have opened up again, albeit with limited capacity and masks required, so I went a few times because THERE WAS A HOLE IN MY SOUL, MAN. Also basically all the manga I bought this month were vol 3. Weird. 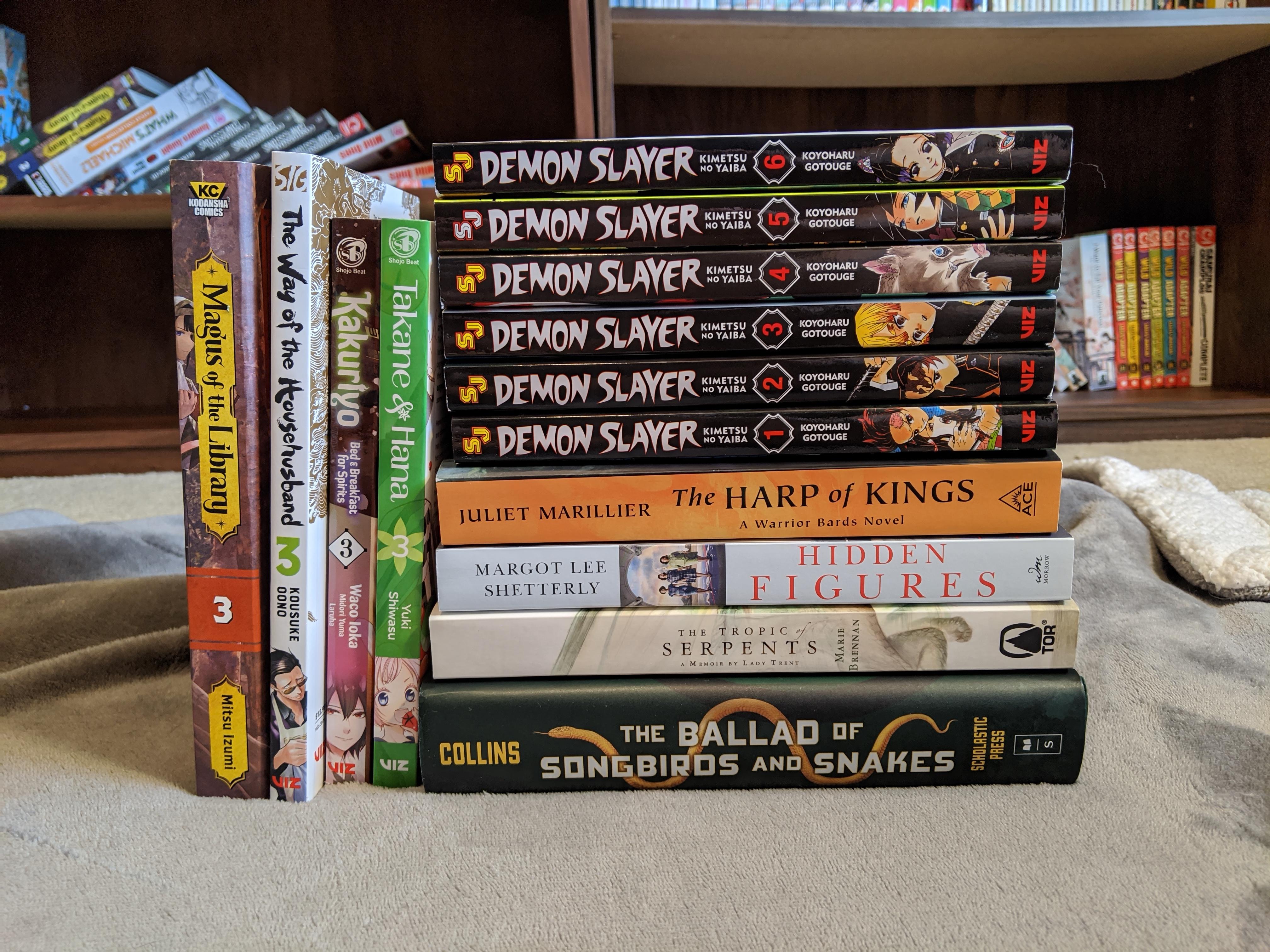 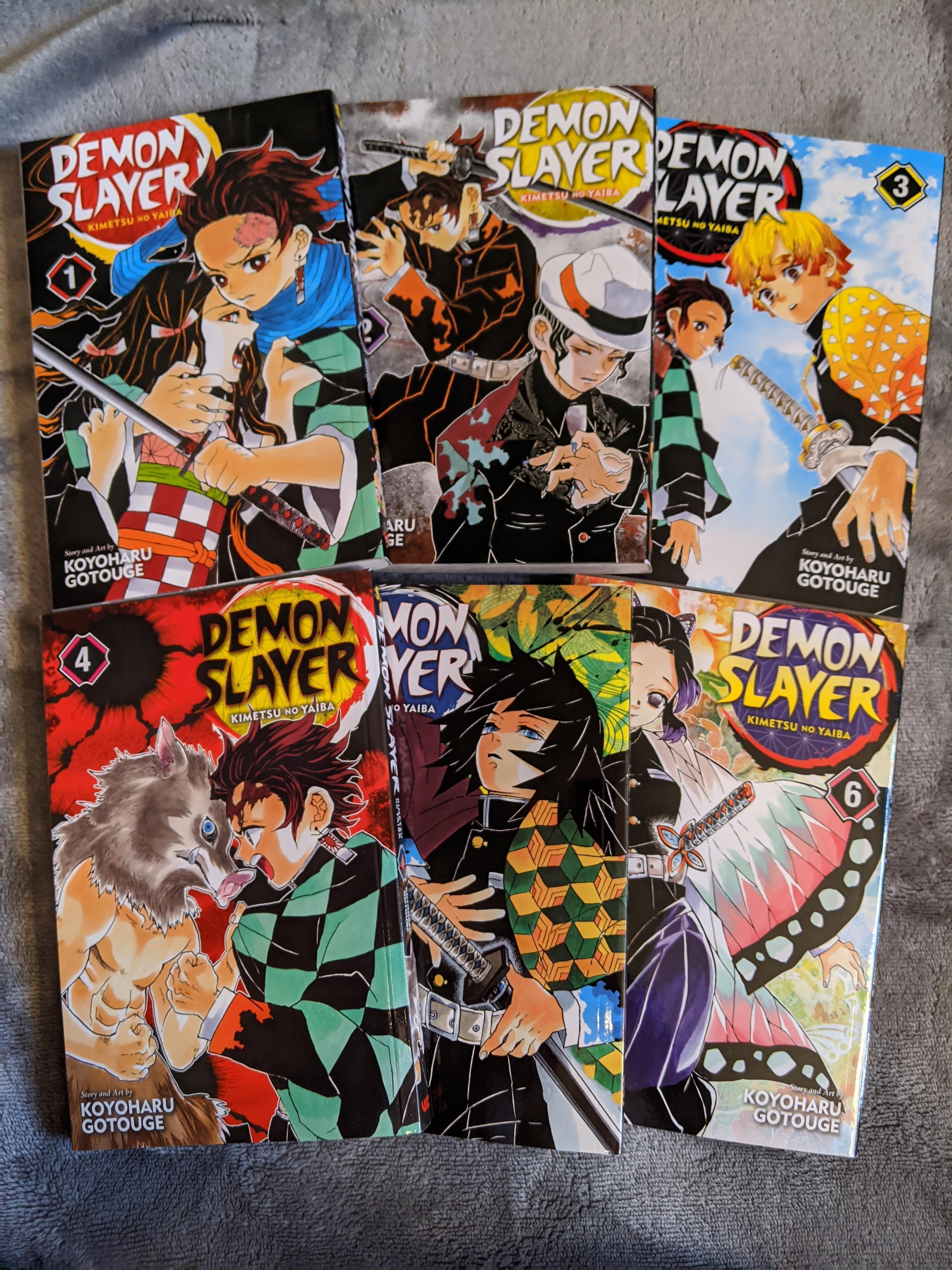 Demon Slayer vols 1-6 by Koyoharu Gotouge – I’ve mentioned before that I’m obsessed with the anime, particularly the music, so I wanted to give the source material a try as well. I’m happy to see that the covers of this series are just as vibrant as the anime.

This story follows Tanjiro – the boy on the cover of issue 1 – after his family is slayed and his sister is turned into a demon. He goes on a journey to become a demon slayer and turn his sister back into a human again. It has wonderful characters, beautiful art, and a plot that’s more than you’d think. It’s really, really good. Honestly I know I just bought the manga, but if you wanna check it out, I really recommend the anime. The music just makes it, man. 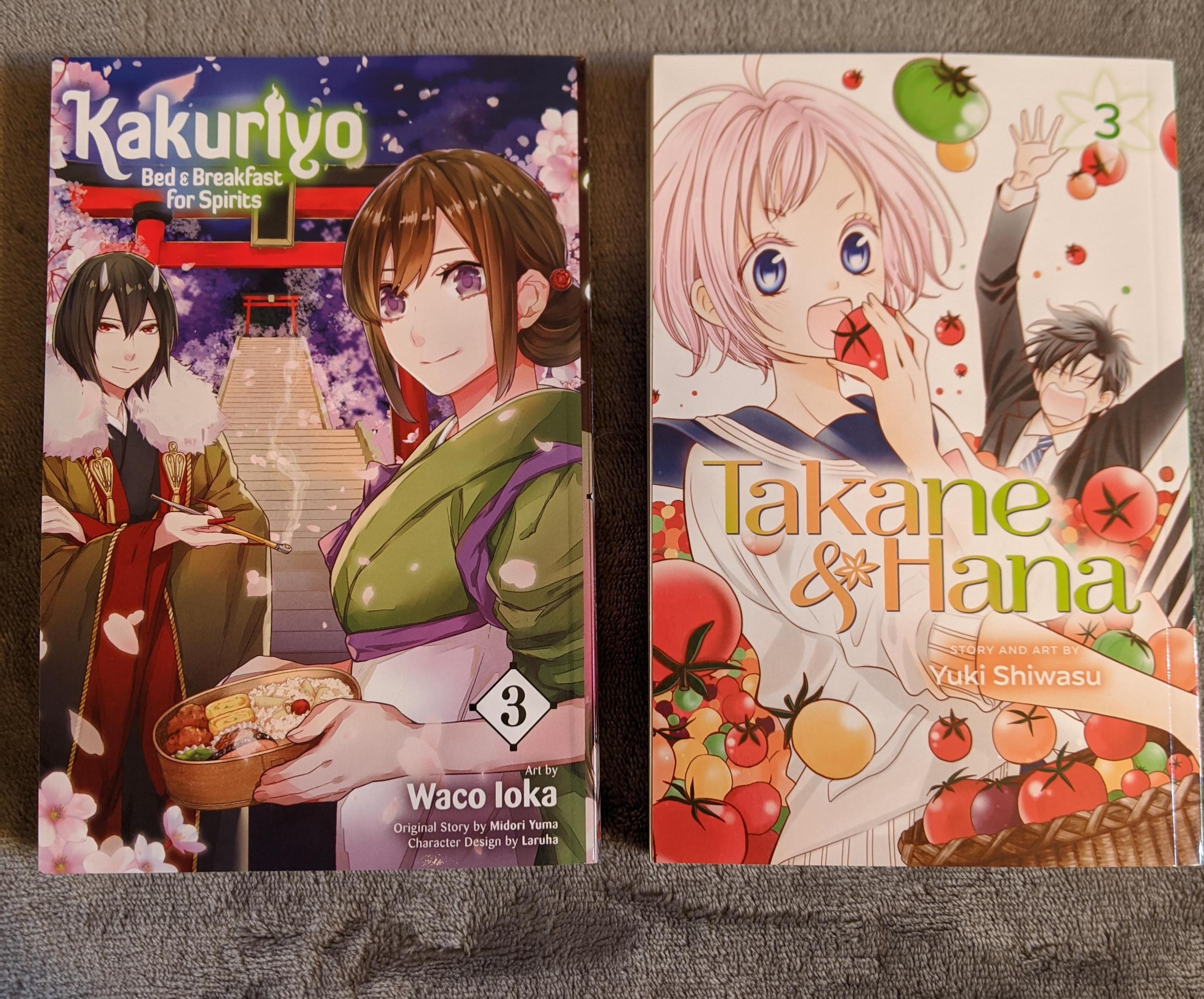 Kakuriyo: Bed & Breakfast for Spirits vol 3 by Waco Ioka – This is continuing my collection, and I’m on the hunt for more. I wrote a blabber about vols 1 and 2, spoiler-free, should you feel inclined to check it out.

Kakuriyo gives me serious Spirited Away vibes, but with slightly darker and more serious elements. The main character on the right of the cover is swept off into the spirit world, and is told she is to be the guy on the left’s bride. She obviously isn’t havin it though, so it’s the story of her trying to navigate this spirit world. It’s really nice and atmospheric.

Takane & Hana vol 3 by Yuki Shiwasu – I picked this up on one of my bookstore excursions!

This series fallows Hana, who stands in for her older sister during an arranged marriage meet-up, and Takane, who is the potential match. It’s cute and fluffy so far, but there’s a decent age gap, so I’m still luke-warm to it. It has the potential to be wholesome, but it could also go creepy, so I’m waiting to see which way it goes. 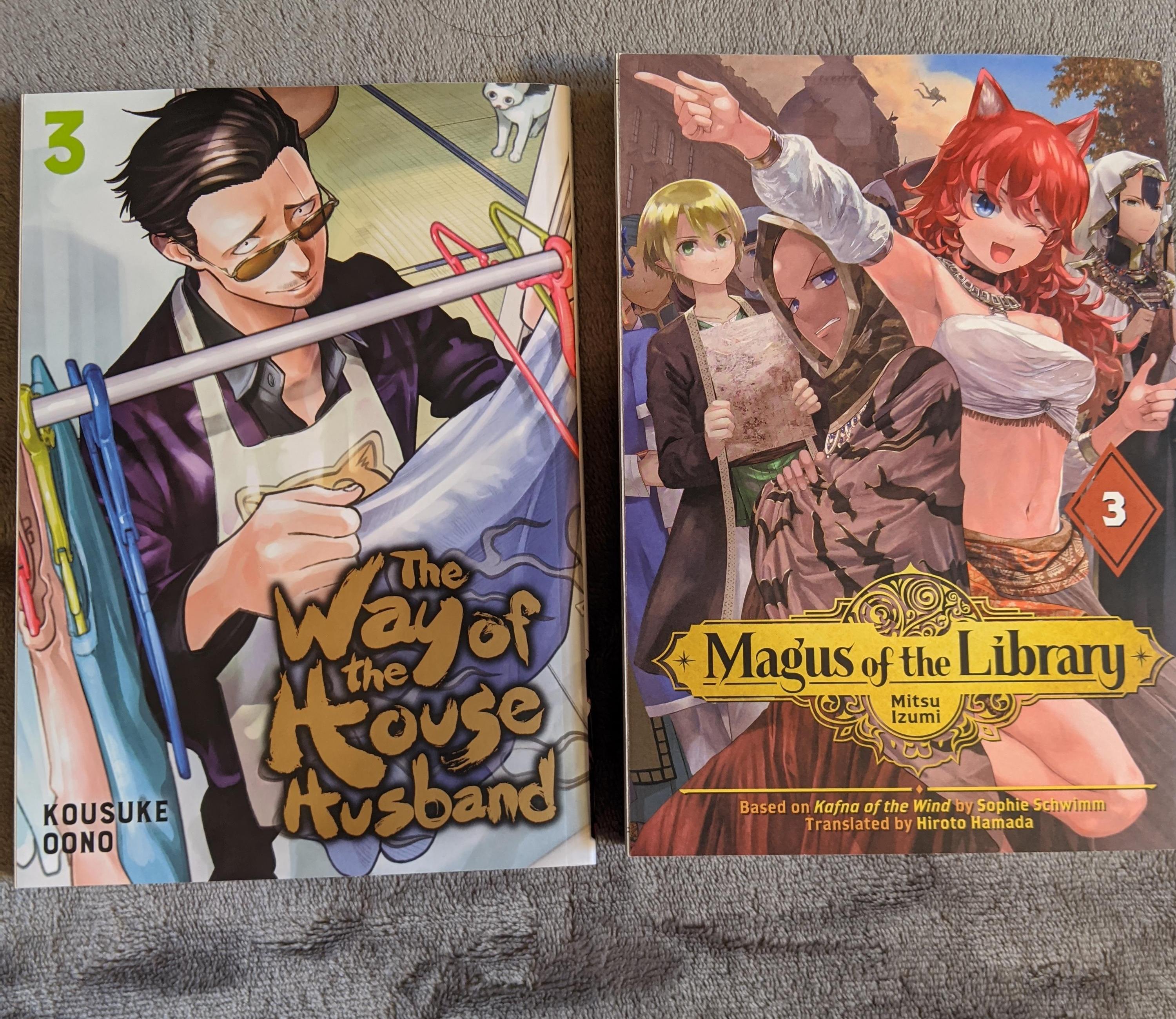 The Way of the House Husband vol 3 by Kousuke Oono – I’m really pumped for this one, the first two were hilarious!

This series follows a man once known as ‘The Immortal Dragon’, a high ranking member of the yakuza, after he settles down, gets married, and tries to run the household while his wife goes to work. It’s seriously wonderful and wholesome and the main couple has such a chill relationship, I love it.

Magus of the Library vol 3 by Mitsu Izumi – I’ve only read the first volume of this so far, but I’m rather smitten.

Magus of the Library takes place in a land where libraries are a powerful source of knowledge, and librarians are heroic adventurers that go around the world and collect rare and wonderful books. The main character stars off as a child in one of the villages the librarians visit to collect an enchanted tome, and it goes from there. Seriously, the first volume alone had me sold. 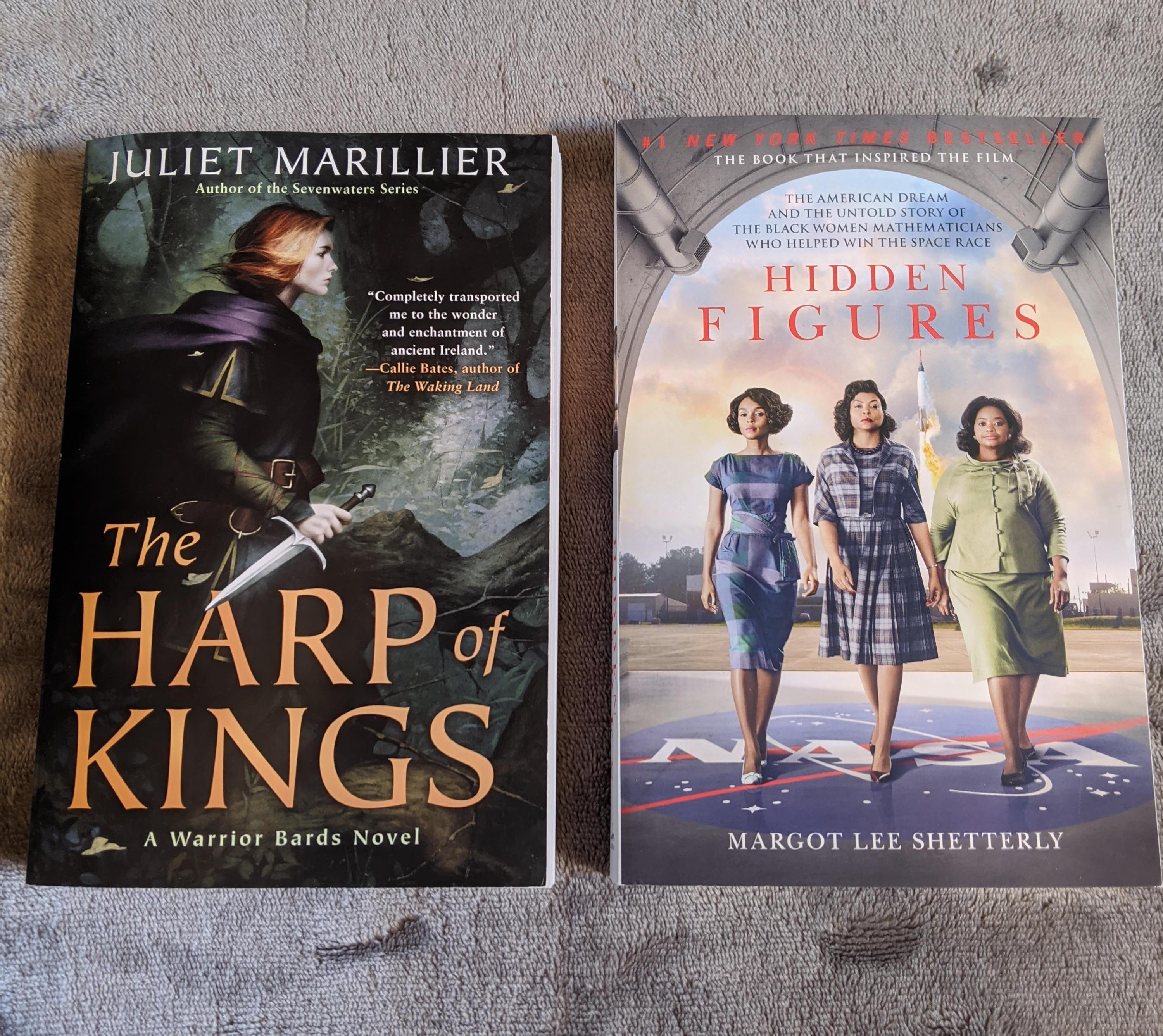 The Harp of Kings by Juliet Marillier – Honestly I can’t even tell you what this one is about, only that I’m excited to read it.

Juliet Marillier has become an auto-buy author for me, after only reading one of her books. I read Daughter of the Forest late last year and loved it, but I really fell in love with the settings of her books and the writing style. And for some reason, my book store never seems to keep her in stock. So when I do happen to see her books, I scoop them up!

Hidden Figures by Margot Lee Shetterly – Last week, Ms Shetterly made a presentation where she basically got on and streamed to all of us live, talking about the events that inspired the book, the ladies the book was about, and everything that’s going on right now in today’s atmosphere with the Black Lives Matter movement. I thought she gave a wonderful presentation and she was really inspiring. I loved the movie when it came out and at her presentation I realized I didn’t have the book, so I bought it! 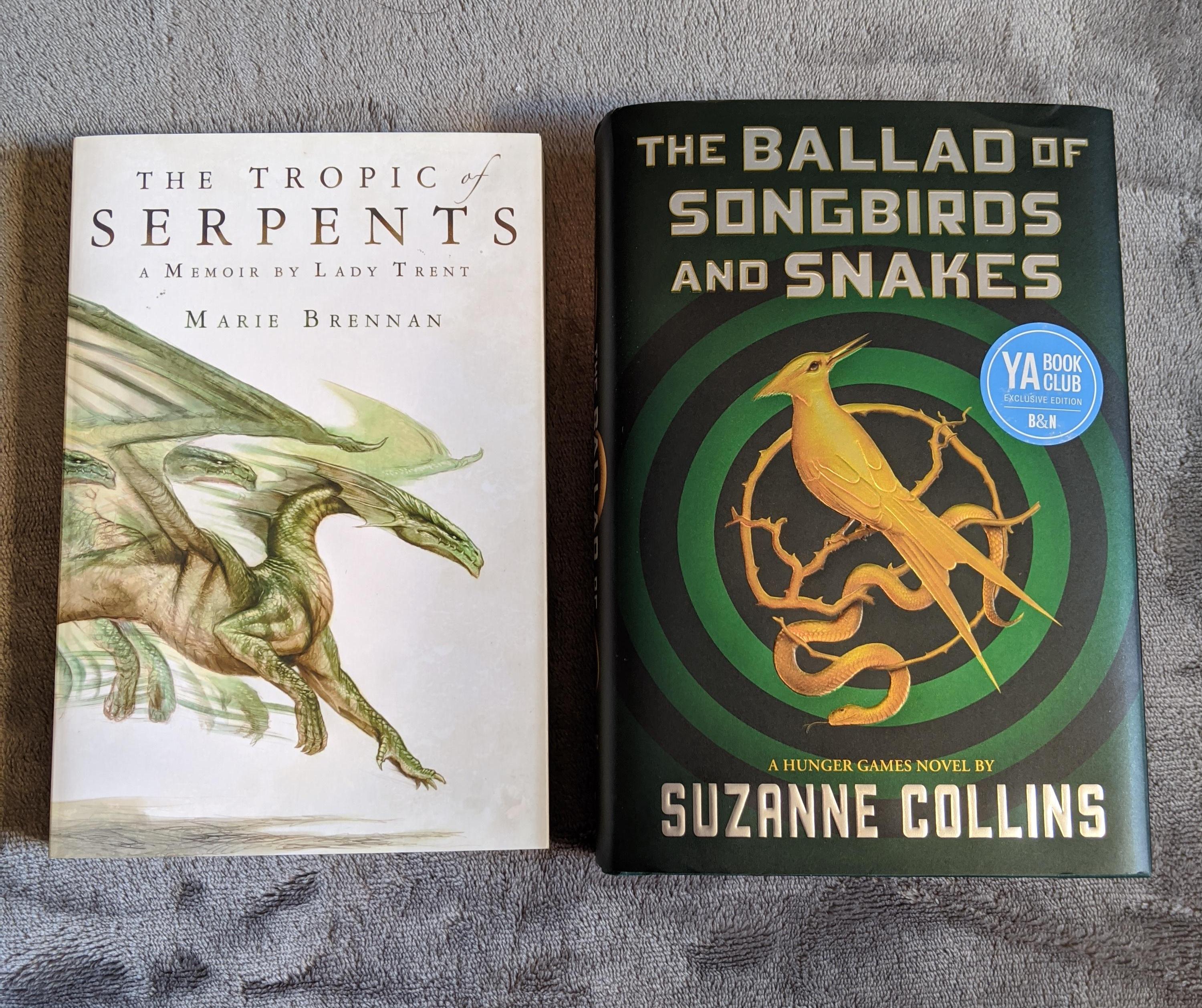 The Tropic of Serpents by Marie Brennan – This one I am very pumped about.

This is the second book in the series, the first being A Natural History of Dragons, which I read in April and loved. This book is essentially a travel and research journal written by a fantasy equivalent of a Victorian-age woman who ventures into the wild to study dragons! The first was really clever and witty and entertaining and I’m pretty sure I’m going to love this one too.

The Ballad of Songbirds and Snakes by Suzanne Collins – I’m rereading the original trilogy in prep for this one, since it’s been probably ten years since I actually read them.

The is the prequel, following I think President Snow and Mags? Or something? Honestly I’m not positive. But really how could I not get this?

And that’s it! Four books, ten manga. I’ve already read about half the manga, so expect to see it again tomorrow in my wrap up 😛