I got some books this month! Just a few, which is smaller than my hauls have been lately, so this’ll be short and sweet.

This is what I got: 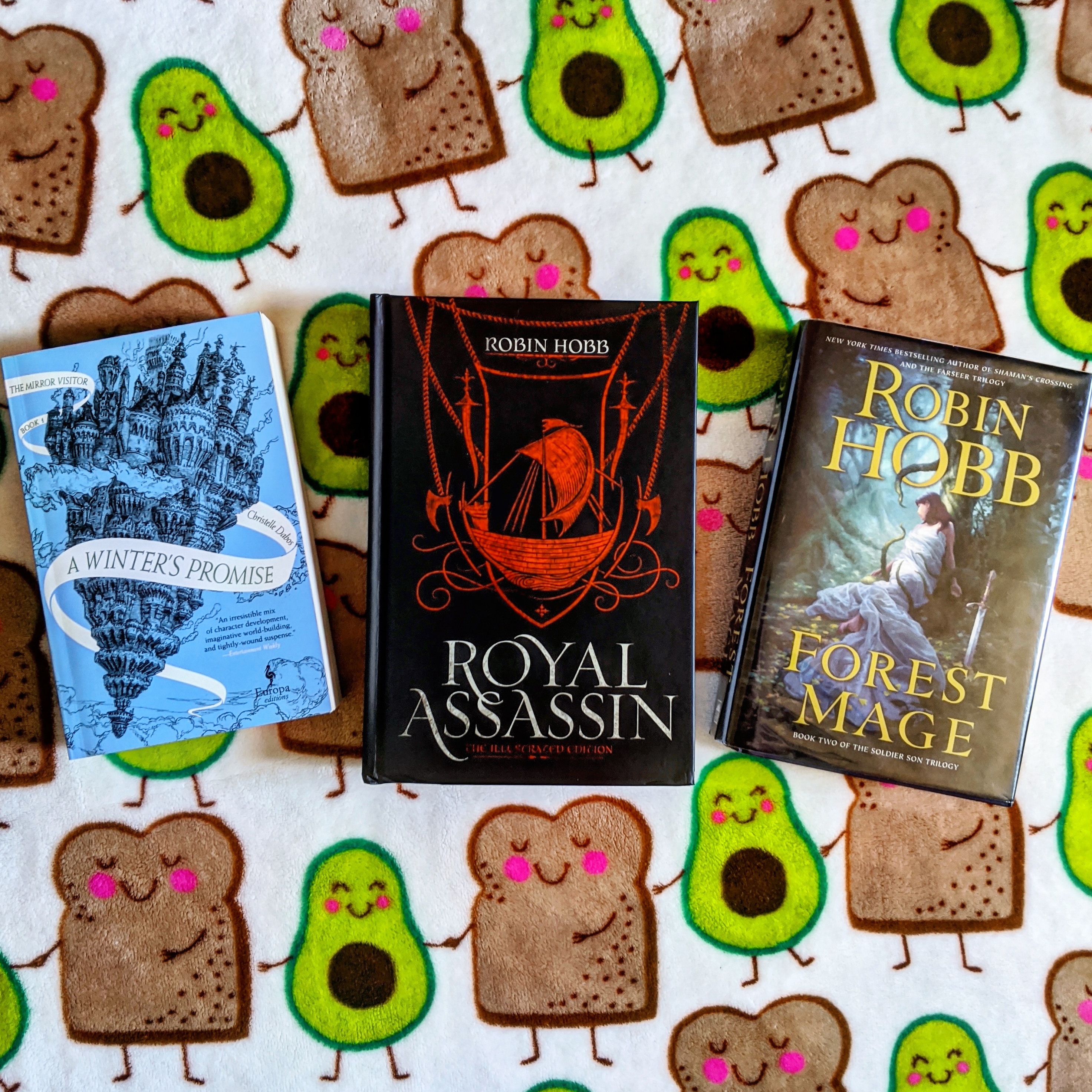 A Winter’s Promise by Christelle Dabos – This one’s been on my list for a while, but I’ve never actually seen it in stores before. So when I did happen to spy it last time I was in BN, I picked it up.

Goodreads synopsis: Long ago, following a cataclysm called “The Rupture,” the world was shattered into many floating celestial islands. Known now as Arks, each has developed in distinct ways; each seems to possess its own unique relationship to time, such that nowadays vastly different worlds exist, together but apart. And over all of the Arks the spirit of an omnipotent ancestor abides.

Ophelia lives on Anima, an ark where objects have souls. Beneath her worn scarf and thick glasses, the young girl hides the ability to read and communicate with the souls of objects, and the power to travel through mirrors. Her peaceful existence on the Ark of Anima is disrupted when she is promised in marriage to Thorn, from the powerful Dragon clan. Ophelia must leave her family and follow her fiancée to the floating capital on the distant Ark of the Pole. Why has she been chosen? Why must she hide her true identity? Though she doesn’t know it yet, she has become a pawn in a deadly plot.

Royal Assassin by Robin Hobb – This is the 25th Anniversary Illustrated edition, and it’s signed! I also got some awesome character art to go along with it, check it out!

Goodreads synopsis of book 1, Assassin’s Apprentice: In a faraway land where members of the royal family are named for the virtues they embody, one young boy will become a walking enigma.

Forest Mage by Robin Hobb – I picked this book up shortly before finishing the first one, which I buddy read with Zezee @Zezeewithbooks. I ended up really, really liking it and knew the second one would be a given for me to get. So here it is!

Goodreads synopsis of book 1, Shaman’s Crossing: Nevare Burvelle was destined from birth to be a soldier. The second son of a newly anointed nobleman, he must endure the rigors of military training at the elite King’s Cavalla Academy–and survive the hatred, cruelty, and derision of his aristocratic classmates–before joining the King of Gernia’s brutal campaign of territorial expansion. The life chosen for him will be fraught with hardship, for he must ultimately face a forest-dwelling folk who will not submit easily to a king’s tyranny. And they possess an ancient magic their would-be conquerors have long discounted–a powerful sorcery that threatens to claim Nevare Burvelle’s soul and devastate his world once the Dark Evening brings the carnival to Old Thares.

And that’s it! Next month, I guarantee my haul’s gonna be sizeable. I turn 30 on the 7th and was originally planning on throwing me and my friend (also turning 30 five days after me) a birthday bash. But due to the plague, that’s been cancelled. So the hundreds I was gonna sink into the party prep will now being going towards books. Yay for me.