Happy still-August! This month, I got a bunch of books and manga – some I bought myself, some I received as gifts from my friends and family for my birthday. This is everything I got! 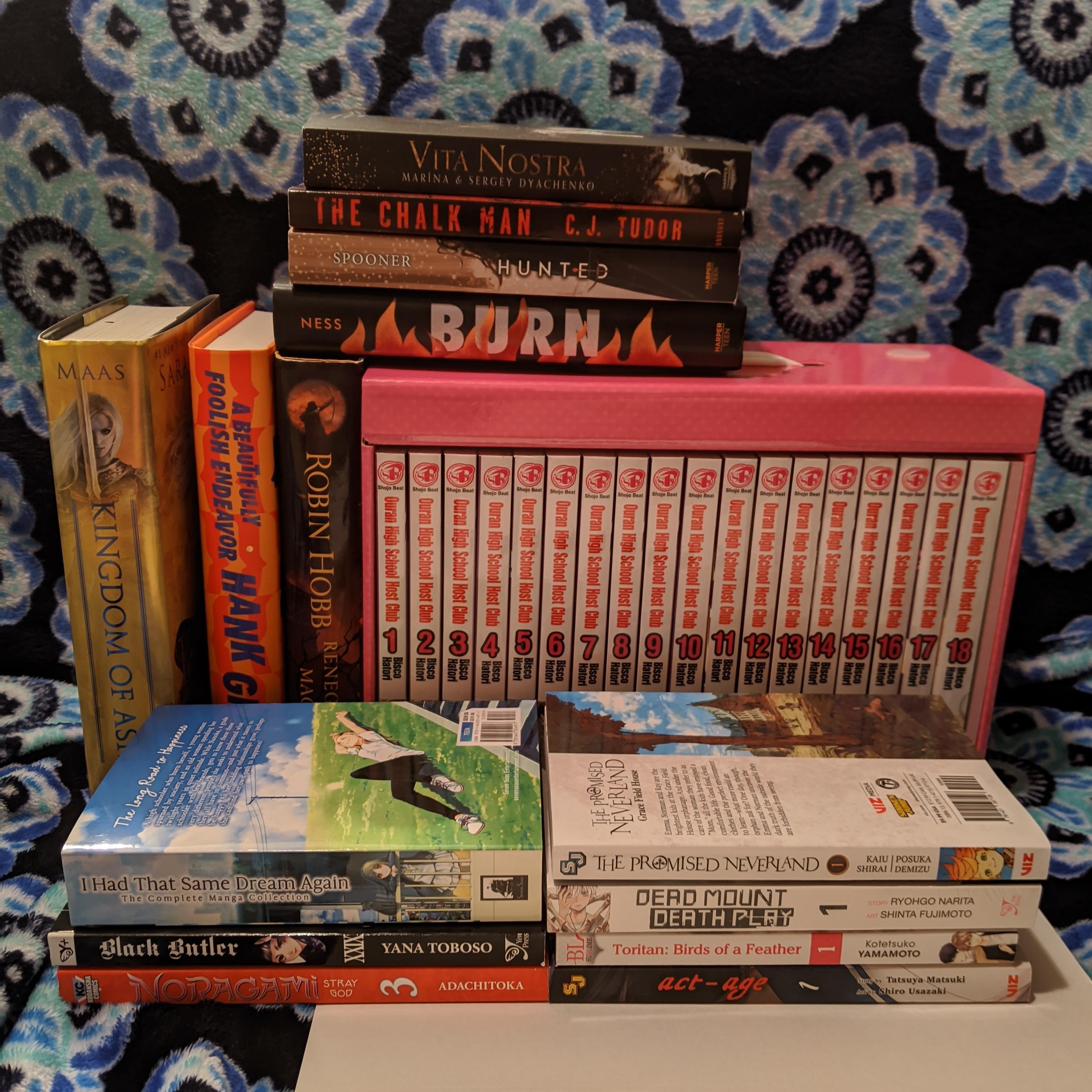 Hunted by Meagan Spooner – This is one of those titles that since it came out, it’s kinda sorta on your radar. Every time you see it in the store, you pick it up momentarily and then put it back down with a ‘I’ll get this eventually’. Well, I got it this time.

Kingdom of Ash by Sarah J Maas – All my other editions are in paperback, but I got this hardback because I found it for three bucks, man.

A Beautifully Foolish Endeavor by Hank Green – I read the first one of these earlier this year and really enjoyed it. Lucky me, I didn’t have to wait too long for the second one.

Renegade’s Magic by Robin Hobb – With this acquisition, I officially have all the novels that Robin Hobb has written. I don’t know how I feel.

The Chalk Man by C. J. Tudor – This is a bit outside my usual genre, but I’ve picked up a couple thrillers recently and found that I like them, so… branching out!

Burn by Patrick Ness – This one, I actually went to buy on release day. The book store I went to said they had some in stock but the seller couldn’t find them. -_- Cue me coming back every weekend or so looking for the thing, which never showed. When my birthday rolled around I just said ‘eff it’ and ordered it for myself online.

I Had That Same Dream Again by Yoru Sumino – This is by the same author that wrote I Want to Eat Your Pancreas and MAN I AM HERE FOR IT. I HOPE IT BREAKS MY HEART. This was also a birthday gift from my bff :”D

Act-Age vol 1 by Tatsuya Matsuki – A couple days after I bought this, the author got himself arrested and his series was cancelled. I don’t know why he was arrested, and I’m not going to look it up until after I read this, because I don’t want to know, not yet.

Dead Mount Death Play vol 1 by Ryohgo Narita – This one I picked up on a whim after a recommendation from one of my best friends. Honestly I have no idea what it’s about, but my friend has a pretty good track record when it comes to picking out manga I’d like, so I’m keeping my hopes high.

Toritan: Birds of a Feather vol 1 by Kotetsuko Yamamato – I don’t know too much about this one either, aside from there’s a romance and one of the characters can talk to birds, I think?

Noragami vol 3 by Adachitoka – I’ve been after this vol for a while and finally it showed up. I think I’m gonna have to reread this series, too.

The Promised Neverland vol 1 by Kaiu Shirai – I fell in love with the first season of this anime and decided I couldn’t wait for season 2, so now I’m collecting the manga.

Ouran High School Host Club box set, vols 1-18 by Bisco Hatori – This was a birthday gift to myself. I’ve been meaning to collect this series for a while – I loved it as a teenager. So I bought the box set! It’s the full series, so now I can buzz through it all!

Well, no it’s not. The same day I made the online order for the Ouran High manga over a month ago, I made another order to another website for more manga. That order hasn’t shipped yet. Hopefully it does soon, otherwise I’m probably just gonna cancel it and look elsewhere. Boo.