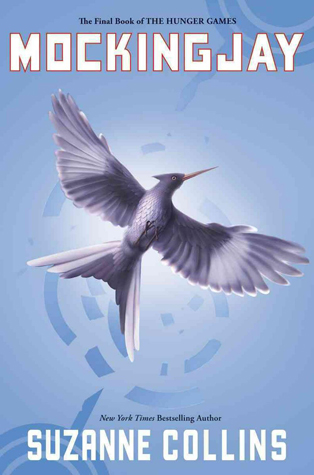 I realize there’s been a bit of a gap between my post about Catching Fire and this, but life is life, y’know.

As stated in my original post about The Hunger Games, I bought the prequel recently and realized I hadn’t actually read the original trilogy since they first came out back in 2011 or so. So I figured I’d reread the whole thing and compare my opinions from then, when I was 20, 21 years old, to my opinion now, being a decade older. The first two books, my opinion of them was more or less positive, just as it had been the first time I read them, but I noticed I liked different things about the books than I originally did. If you’re interested for some in-depth thoughts, you can find my post about the first book here, and the second book here.

So out of the three, Mockingjay definitely had the biggest difference of opinion between 20 year old me and 30 year old me.

When I was 20, I think I rated this book three stars. At the time I wasn’t overly impressed. Thinking back, I’m pretty sure the reasoning was I had expectations about how I wanted the book to go, and when it didn’t happen, my overall enjoyment of it suffered. I remembered really wanting a stronger romance and being annoyed that Peeta had been hijacked, I remembered shipping Katniss and Gale and was bummed it didn’t happen, and most of all, I remember feeling that the whole ‘Katniss has problems with the chain of command’ plot line to be annoying, and I couldn’t understand why they just didn’t let her do what she needed to do. I was twenty, mind you, so I strongly related to Katniss, who was just a couple years younger than me at the time.

So a combination of all of the above, had me really not loving the book, nor how it ended.

Rereading it now though, I had a very different experience. First off, I was better able to invest myself in the whole district thirteen authority struggle. I totally understand why they didn’t let a seventeen year old do whatever she wanted, and I thought they handled Katniss being defiant pretty well – well as well as they could, considering they weren’t even aware of half of what she was doing. And at the same time, I could still understand Katniss’s motives when it came to ignoring orders. The point of contention between the two sides felt fuller, more nuanced, and definitely more interesting than it did the first time around.

Secondly, this time through I wasn’t really shipping anyone, so the romance, or lack thereof, really didn’t bother me. The plot line with Peeta being hijacked was also much more interesting to me, and it was interesting to see how he was making progress to overcome it, and what ended up triggering a violent episode in him. If anything, I wanted more of that plot line. I wanted a POV inside of Peeta’s head, and was a bit disappointed that all we got was Peeta through Katniss, who for a long time was bitter about it at best.

The most striking difference in my enjoyment of this book was where my expectations were. I hadn’t read the book in a decade, and I never watched the last movie, so I only had a vague rememberance about how the book ended, but it was enough not to let my mind decide I wanted it a certain way and then get disappointed. So for what the plot was, I liked it. I remember not liking how many people died in the story the first time around, but this time around, while I still didn’t love it, it felt realistic. There are a lot of YA books that are afraid to kill off characters, especially in pointless deaths, but the reality is, it happens, especially in war. So while I’m sad all the characters that died did die, it felt realistic compared to what war is like.

The only thing I didn’t care for though, and it was the same as before, was the ending. It was very rushed. While Katniss was quickly swept away from where the main story was happening and only heard about it second hand – which again is realistic – it was kinda disappointing that we didn’t get to learn more about how the world ended up, or how the power struggle fizzled out to get there. I understand that Katniss didn’t much care about it herself, which is why we didn’t see it, but I feel like a second POV from someone who was more involved would have been beneficial.

So. Overall, I did enjoy this book much more than I had ten years ago, and I’m glad I reread it. Solid 4 stars. With this third book done, I do plan on picking up the prequel before the end of the year. If you’ve read it, do let me know your (non-spoilery, please!) thoughts.