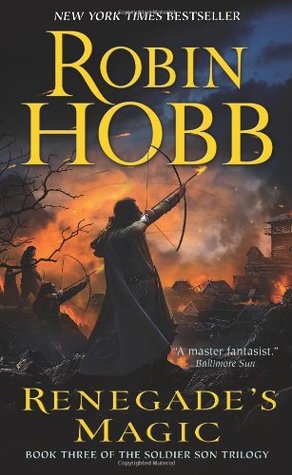 I have complicated feelings about this one.

This is the third and final book in Robin Hobb’s Soldier Son trilogy and… unfortunately my least favorite of the three. Don’t get me wrong, I did like this book. I just didn’t love it like I was really hoping to.

This is the last novel that Robin Hobb has published that I had yet to read, so I was hoping to go out with a bang. I’m not sure if my desire for this affected my enjoyment of the book or not, honestly.

As per usual, I read this with Zezee @Zezeewithbooks, and we both ended up having similar ‘ehhhh’ feelings throughout.

So this book picks up directly after the second one ends. Nevare has now used magic to the extent that he’s essentially lost himself to it. Soldier’s Boy has taken over control of his body and for the majority of this book, Nevare is trapped inside, helplessly witnessing the actions that this alter-ego is taking while using it. Because Nevare can’t actually do anything and because the book is solely from his point of view, the narration becomes very, very passive. Large parts of it are him watching his body move around and lamenting in his horror and frustration at not being able to do anything about it.

And I gotta tell ya, it got irritating after a while. I mean, the situation was realistic, at least in the world of the story. What else did Nevare have to do aside from lament? He was trapped! But like… the narration decision I wasn’t a huge fan of. There was all this stuff going on – machinations of Soldier’s Boy and the Specks, things with Epiny and Spink, all sorts of stuff – but the narration didn’t touch nearly enough on that because Nevare was the only POV and had limited visibility of it all. Usually I like single POV stories but I feel like it was a flaw in this novel. I get why it was done, mind you, but it really created an irksome and boring chunk of the book, at least for me.

Luckily though I still liked Nevare as a character, even though he was being annoying. I’m not sure Zezee did as much, which I think meant I enjoyed the story a tad more (though if I’m wrong, correct me friend :p) Nevare really grew on me as a character, because his development from book one to three was awesome. In the beginning, he was essentially a stick in the mud, and expected everything to be given to him as his birth right. By the end, he had become a worldly, compassionate human, able to see things from others points of view to the point where he realized his peoples’ way of life might not be the “right” way or the “only” way. Aside from his unfortunate situation and lamenting of it in book three, his character arc was pretty great.

Another thing I liked about this book was how it handled “good” and “bad”. The two nations in the book, the Gernians and the Specks, are at odds with each other. The Gernians want to build a road to the sea, straight through the Speck’s territory. The Specks don’t want this because building the road would mean chopping down their ancestor trees – huge, sentient things where the spirits of their dead reside. The conflict comes because the Gernians don’t understand the spiritual importance of these trees, and the Specks don’t understand the Gernian’s need for new trade. So neither side is “bad”, really. They both have good goals – save their nations – but they cannot understand the other, therefore each thinks the other is the antagonist. Nevare is smack in the middle by book three. Especially with Soldier’s Boy spending more and more time in Speck territory, Nevare is able to pick up these nuances and contemplate each side’s point of view. I think this was handled really, really well and when Nevare was lamenting about this particular topic, it made for some interesting reading.

We also got some of the side characters back, though not nearly as many as I had hoped. Spink and Epiny in particular played a large part in this novel, which I think was great. I said it last time too but their relationship is just wonderful. They’re so open and trusting with each other, and they understand each other without really having to explain themselves. Their situation during this book was affected a lot by Soldier Boy’s doings, and it caused a bit of conflict between them and Nevare. I really liked that communication was big in this though: there was no ‘but let me explain’ and then walking away. Epiny basically always demanded a thorough explanation every time something happened that caused a conflict, and it held her, Spink and Nevare together like glue, and I really loved her for it.

Some side characters though we didn’t get to see again. Namely I was hoping to see Gord, a character from book 1. In book 1, he was Nevare’s classmate and was bullied mercilessly for his weight. Initially Nevare thought poorly of him for his size but grew to respect him for his character. Gord got a good bit of development too when he was present in the narrative, and then the plot took a turn and he basically disappeared. In retrospect, I see that Gord as a character was set up to be a parallel: he was fat and Nevare respected him less for it, and then the magic took over Nevare and he got fat and people also lost respect for him. Gord was essentially a plot device and it left me feeling salty. I get that the message was ‘people are more than their bodies and should be treated as such’ but still, I wanted Gord to come back. I wanted comradery between Gord and Nevare. I wanted it!

I want a full book about Gord, dammit.

As for the ending, I think it was pretty satisfying. No spoilers, mind you, but I do believe that aside from the characters from book one that are basically never mentioned again, the story wraps up well and most of the plot lines are brought to a close. It was a good ending and left me feeling complete. Because of that, my enjoyment of the book bumped up a bit. The book itself definitely dragged at times, but the way it finished off made up for it (a bit).  I’m not gonna say anything else on it other than ‘I definitely liked it’.

So yeah, this was my final Robin Hobb book, at least until she publishes something else (please?!?!?!) Despite me not loving this book, she’s definitely my favorite author, basically ever. And now that I’ve completed her books I feel a void in my heart, and I need to reread everything lickity split. I wonder if I would reread this book in a few years if I would enjoy it more? It’ll be interesting to see.