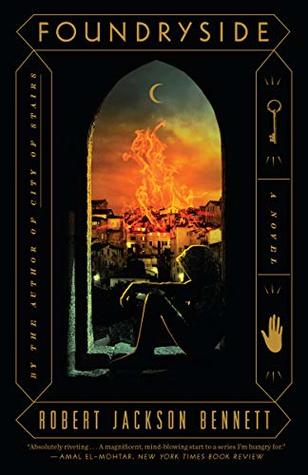 I am very late to this train. When this book first came out two (three?!?) years ago, I remember seeing it on the favorites lists of a lot of people. The premise of it did pique my interest at the time, but I felt no need to immediately pick it up.

Last month, I picked this up as part of a buddy read with Meredith @Allboutthembooksandstuff, a friend of mine that I’ve had since I was a teenager. I gotta tell ya, we both ended up absolutely adoring this book. I’m a bit mad that I waited so long to jump on the hype train.

This book in set in a city ruled over by four merchant houses, each of whom have their territory walled off within the city limits. Anyone who doesn’t belong to one of the houses lives in the Commons, the area between the walls. The main character Sancia lives there, not belonging to any merchant house, nor to anybody else in particular. The narrative opens on her sneaking into a building to steal an item she’s been hired to steal. She doesn’t know what it is or what it does, she just knows that the buyer is willing to pay a lot of money. And right away, we’re introduced to the magic system, which I think is one of the coolest parts about this book: scriving.

Scriving is magic system based on written sigils that are carved into objects to change their reality. The sigils range from simple to mind-bogglingly complex. For instance, a sigil could be written on a carriage to make it think it’s always on a slope, therefore should be moving because it’s only natural to move downhill. And boom, you get a carriage that moves on its own, without the need for horses to pull it. Sancia herself has been altered by sigils – a metal plate in her skull, inscribed with the things, allow her to know objects. All she needs to do is touch them, and she learns their makes, their histories, and their weak points. Perfect skills for a thief, who needs to know if there are people standing on the floors in the next room.

So the story starts from there, with Sancia stealing this object and having to deal with the resulting consequences. The narrative introduces a cast of characters ranging from human to beyond.

My favorite thing about this book was the humor. A character is introduced very shortly into the beginning that Sancia is able to use her scrived brain to communicate with, and their banter is so amusing. The character himself is sassy and quick-witted. Sancia too has a wry sense of humor about most things that happen throughout the story. I laughed out loud multiple times throughout the book. I really love it when a serious plot is interwoven with light-hearted-ness and the author here pulled it off perfectly.

Most characters I feel were developed pretty well, namely Sancia, Orso, and Clef. Orso is a scriving master, and his job is to carve sigils into items for the merchant house to which he belongs. Clef is well, a character that I can’t tell you about without it being a spoiler. But I feel that his character development throughout the book is really good. There were a couple characters I felt were a bit flat, and I’m hoping they get more development in book two. There was also a bit of a romance between two of the characters, and I’m not sure how I feel about how it was executed. I ship the characters mind you, but I feel the progression of the romance was a bit rushed. It’s a minor plot point though so I’m not super concerned about it, nor did my iffy feelings of it influence how I felt about the book as a whole.

The plot in itself was really interesting to me. In the synopsis I mentioned Sancia stealing an item without knowing what it was. The theft of it gets interwoven into a larger conflict, and involves ancient civilizations and carving new realities and beings that probably shouldn’t exist but do. I really love how vast the world felt, even though the entire book takes place within the confines of one city. It dove a bit into philosophy and ethics as well, touching on subjects like human experimentation, whether or not humans should be able to change the reality of the world, what happens when they do, and what is considered ‘ethical’ during wartime vs peace time. The various characters have different opinions on it obviously, and the topics are handled in a way that feel realistic.

The pacing as well was great. At no point did the story lag. I never felt like I was trudging along. Most of the time, I read the entire section of book I was to read each week for the buddy read in one sitting. It was really hard to actually put the book down and wait until the day we could talk about what we’d read so far.

Overall, I really loved this book, and I know Meredith did as well. It gets a definite five stars from me. Easy peasy. We plan on picking up book two in a couple months, and then we’ll pine, waiting until book three is released.

But yeah if you’ve been on the fence about picking this one up, definitely do it.