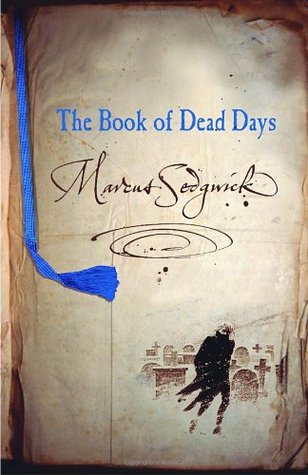 Unfortunately this book wasn’t for me.

I picked this book up after owning it for probably twelve years. I purchased it back then on a recommendation from a friend, as it’s one of her favorite books (sorry, friend!) This past Christmas, I decided to finally read it, picking up on the 26th, the first day of ‘The Dead Days’ in the book, which are the days between Christmas and New Years, thinking it’d be a ‘festive’ way to end the year.

Well, the book I was supposed to finish it five days took me a month and a half, and honestly with my final opinion of it, in retrospect that doesn’t shock me.

This book follows a boy named Boy and the wizard he works for named Valerian. Valerian did something dumb in his youth and sold his soul in a deal, and at the end of the Dead Days, whatever the thing is is coming to collect. The premise sounded good, so I was interested upon starting the book.

Unfortunately that was one of only two things I liked about this book. I’ll start with the other positive thing though: I really liked the tone. The author was able to creative this muted, dreary, slightly disenchanted tone that matches the day after Christmas perfectly. It felt like all the build and up magic we get during December just disappears overnight, and this book really nailed that. I started reading this during those days obviously, but even after in January and February, the tone held up, and I still felt like it was right after Christmas. So points for that.

But otherwise, this book was a bit of a let down. I started reading and quickly realized that Valerian, the one whose soul is at risk, is a jackass. Now I have nothing against unlikable characters, but he treats Boy, the one person who’s trying to help him, like shit the entire book. I was told upon noticing Valerian was a jerk, that he’d grow on me over time or that he got better. Well, no. He was an ass up until the end, and it made the plot feel meaningless to me. I didn’t care if he died or not and I didn’t see why Boy was so loyal the whole time. Honestly Boy started grating on my nerves after a while as a result. He had no agency and felt very flat. The blind loyalty to someone who treated him in such a way was astonishing and felt very unrealistic. His thoughts didn’t even stray. I can understand being stuck in a situation you can’t escape from – I get that – but even his thoughts didn’t suggest that he anything but loyal, even while acknowledging his master was a jerk. It really rubbed me the wrong way.

The only character I liked in the book was Willow, who was similar to Boy in situation but actually displayed some agency. She questioned and challenged Valerian’s behavior more than once, and Boy basically reacted by saying ‘augh stop don’t do that’ and Valerian was like ‘why aren’t you more like Boy, mindless just obeying me?’. Like Boy was such a formulaic character that it was even known to the other characters how flat he was. At first I thought Boy was this way for a reason and would go through huge character growth and get some self-respect by the end of his character arc, buuuuut nope. It was frustrating.

The book also set up a bunch of questions that were hinted at throughout the book, and during the ‘big reveal’ at the end they were ‘revealed’…. but not really. We never actually got any answers to any of the questions Boy brought up throughout the story, despite Valerian saying over and over he’d answer them. I get the Valerian probably didn’t know, but setting it up this way created a promise and didn’t give a payoff. It felt very lack-luster, and the book ended without feeling complete. I know there’s a sequel and there’s a chance the questions will be answered, but the ‘fake’ way the reveal happened towards the end was obviously used as just a plot point to get the main character to do what the plot needed him to do, and it felt very forced.

Speaking of the ending, man was it rushed. The climax of the book I swear happened with five pages left in the thing and then it happened and that was it. No wind down, no nothing afterward. Basically the characters were like ‘wow huh that happened’ and then the end. It was very jarring and unsatisfying. I want to try to give it a break because it’s YA fiction but honestly I feel like that’s an insult to YA fiction, as I’ve read some excellent YA fiction. The premise had promise, but I feel the delivery fell really, really flat.

So yeah overall I liked very little about this book. But I was interested in it enough to finish it, so that’s something.

Perhaps this book will be for you, as I know my friend and a lot of people really like it, but it was not for me.