Yay, a taggie. This tag was created by ReadLikeWildFire and Ely Jayne. As usual, totally wasn’t tagged by anyone. Just swiping it because it looks fun. Here are the questions!

1. Best book you’ve read so far in 2015.
I think it has to be Monsters of Men by Patrick Ness. Are you really surprised.

2. Best sequel you’ve read so far in 2015.
Crown of Embers by Rae Carson. This is the second book in the Girl of Fire and Thorns trilogy. I did a review of the first book and really liked it, but I found this book to be sooo much better.

3. New release you haven’t read yet, but want to.
For this one, I’m just going to link to my Top 5 Most Anticipated Releases post, but out of those, it’s The Rest of Us Just Live Here by Patrick Ness. For books that have already come out this year and I just haven’t gotten to them yet, the top of my list is definitely Uprooted by Naomi Novik. This book I added to my ‘to-read’ list as soon as it popped up on goodreads a year and a half ago when I saw that the author of the Temeraire series was writing another book. I had no idea it wasn’t out yet because I wasn’t paying attention. I just saw some hype on it the past week or so and just realized it just came out. Well der, I’m silly. So yes, I want this book. I’ve wanted it for a long time.

4. Most anticipated release for the second half of the year.
I’m really awesome and didn’t read the questions before I started this tag. Haaa, see previous answer.

5. Biggest disappointment.
Lucky for me, I haven’t read a book I disliked this year yet. They’ve all been at least 3 stars. I think the lowest liking of the three star books though is Wolf’s Rain by Bones. I liked it, but I feel it was difficult to follow at times. Honestly, and I don’t say this one often, but I feel this series was better as an anime (which was great, by the way)

6. Biggest surprise.
This would definitely have to be Vampire Academy by Richelle Mead. I know I’m not the only one who was disenchanted with anything to do with vampires by the Twilight series. I picked this up fully expecting to hate read it, but I was so surprised. I really ended up liking this one! I have the remaining five sitting on my shelf (I found the box set for $10 :”D) so I’ll get to them eventually.

7. Favourite new author. (Debut or new to you)
Tammara Weber, definitely. I read Easy by her earlier this summer and fell in love with it. I’ve been hunting the second book in the series and will purchase it as soon as I’m able. This author introduced me to a new genre in a positive light, and Easy will forever hold a place in that blood sucking lump I call a heart.

8. Newest fictional crush.
The newest one is Lucas from Easy by Tammara Weber. He’s a dreamboat. :”D Haha

9. Newest favourite character.
Honestly, nobody pops into mind for this one, aside from the character stated above. The books I’ve read recently haven’t really been character driven, so none of them have had a lot of character development. Hey! Gimme some recommendations for character-driven books? 😀

10. Book that made you cry.
Monsters of Men by Patrick Ness. I just… nothing in this book in particular, no specific event, made me cry. I finished the book, closed it, put it in my lap… and bawled. Like a baby. I don’t know why, but this book broke my heart.

11. Book that made you happy.
History of the World Through Twitter. This book was hysterical, and I feel it deserves for more attention. It’s essentially what it says it is. It’s the twitter feeds of people through various events in history. And it is side-crippling. Go read.

12. Favourite book to film adaptation you saw this year.
The only book-to-movie adaption I’ve seen this year is The Duff. I haven’t read the book though (shame on me) but I liked the movie well enough – it was cute, but I don’t really plan on buying the book though. Otherwise, I’m looking forward to the next Mockingjay release!

13. Favourite review you’ve written this year.
Thaaat would have to be this one, my review of Angels and Demons by Dan Brown. It’s my favorite because I feel I wrote the most uh.. non-mechanically, if that makes sense. In reviews I typically stick to a rough list of bullet points I want to cover about the book – characters, plot, writing, etc.. but that was the first review where I kinda improvised and tried to stick a bit of humor in there. Hopefully, it made it more entertaining to read.

14. Most beautiful book you’ve bought so far this year (or received)
For sure, the prettiest book I’ve acquired this year is The Valley of Amazement by Amy Tan. The clothing on the person is just so pretty, and the book itself has a beautifully framed spine and deckled edges and a soft cover and… sigh ❤ 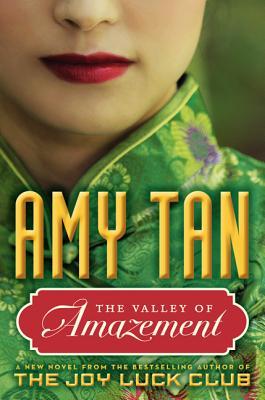 15. What books do you need to read by the end of the year?
There are soooo many. Basically everything on my to-be-read shelf, but I’m gonna highlight this post, in hopes of reminding myself what books I wanted to read towards the beginning of the year. So there.

Tada!! Super long tag completed! If you’d like to do this tag, do it and tell me about it! 😀

Today I’m going to pick out 15 books I’m going to try to read in 2015. I will be reading more than this, hopefully, but these 15 will have priority. In theory. These are all books I already own but have not gotten to yet. My goal is to finish up series I have half completed scratch off some stand-alones. A more specific January TBR will be put up in January and in that I’ll detail more about the books I want to read, but until then I think I’m just going to list them.

1. The Ask and the Answer by Patrick Ness (Chaos Walking #2)
2. Monsters of Men by Patrick Ness (Chaos Walking #3)
3. Victory of Eagles by Naomi Novik (Temeraire #5)
4. Tongues of Serpents by Naomi Novik (Temeraire #6)
5. The Scar by China Mieville (Bas Lag/New Crobuzon #2)
6. Curse of the Wendigo by Rick Yancey (Monstrumologist #2)
7. The Isle of Blood by Rick Yancey (Monstromologist #3)
8. Days of Blood and Starlight by Laini Taylor (Daughter of Smoke & Bone #2)
9. Dreams of Joy by Lisa See (Shanghai Girls #2)
10. 1Q84 by Haruki Murakami
11. Cloud Atlas by David Mitchell
12. Go Ask Alice by Anonymous
13. Eleanor and Park by Rainbow Rowell
14. The Ultimate Hitchhiker’s Guide to the Galaxy by Douglas Adams
15. The Future of the Mind by Michio Kaku