Do you know how long it’s been since I made a T5W post? Because it’s been weeks. Goodness. As usual, T5W was made by Lainey, and here is the full list of posters, should you want to join :”D

This week’s topic is top authors I’ve discovered this year. And if you saw or read my previous post, you know one of the ones on the list already, hawhaw.

5. George RR Martin, author of the A Song of Ice and Fire series

I’m definitely late to the band wagon on this author. I didn’t read the first book in this series until earlier this year, but holy cow, it’s awesome. I was initially a bit wary of starting the series, both because of the hype surrounding it and the sheer size of the things. The time commitment required for these buggers though is well worth it. I’m really glad I started reading this series and once I catch up, I will hunt down his other publications and devour them too.

4. Tammara Webber, author of the Contours of the Heart series

This author I picked because she introduced me to a new genre. The first book in her series, Easy, was my first experience reading a new adult book. It was nice reading about a romance that wasn’t harlequin nor about a fifteen year old. I had heard that such books existed but had never actually found one in a bookstore near me. And then I saw this baby on the clearance shelf at my local B&N and after hearing nonstop praise for it, decided to splurge the four bucks for it. And since, I’ve hunted down the second one as well. Gonna read it pretty soon here I hope – it’s sitting on my shelf, glaring at me.

3. Sabaa Tahir, author of the An Ember in the Ashes series

I feel like the marketers of this book really know what they’re doing. This book was everywhere months before it came out. It was all over blogs, booktube and I even saw posters and pamphlets for it in my local bookstore. And honestly if I hadn’t heard the buzz ahead of time and just would have read the synopsis on the back of the book, I probably wouldn’t have read it. Whoever wrote that blurb made it sound like a star-crossed lovers kind of thing. And it’s so not. I mean, there are hints of romance I suppose, but there is so much more to the book than that. The buzz told me this, the blurb didn’t. This is one of those times I appreciated the hype. This author writes a well-developed, rich world and I can’t wait to read the second one.

2. Peter Clines, author of The Fold

Is this really a surprise. I literally wrote a review* (*see ‘gush’) about it about nine hours ago. I’m still swirling in circles about this book, man.

1. Andy Weir, author of The Martian

This one was another book that the hype helped me. The back doesn’t make it sound like more than a sci-fi, which is all and good, but the comedy was what made me love this book and therefore this author. Mark Watney is a hilarious character. And in combination with his situation, his attitude towards it and then the heavy science topics explained in a way that I could understand, I loved this book. (and it helps that the audiobook I listened to had a fantastic narrator). So I read this and I loved it. Therefore, Andy Weir is definitely my favorite new author of this year. 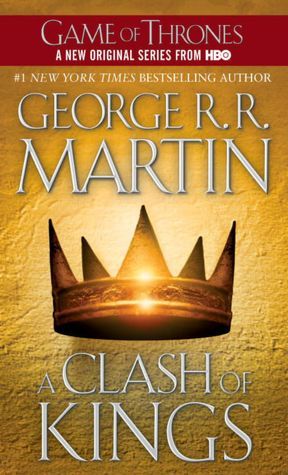 A Clash of Kings by George RR Martin

My thoughts are swirling after reading this book. On the slim chance you don’t know already, this is the second book in the A Song of Ice and Fire series, the first being A Game of Thrones. The first book, I rated 5 stars. This book, I feel I liked even more. Here is a synopsis from Goodreads, because I feel it gives the perfect amount of ‘oooh, ahhh’:

A comet the colour of blood and flame cuts across the sky. And from the ancient citadel of Dragonstone to the forbidding shores of Winterfell, chaos reigns. Six factions struggle for control of a divided land and the Iron Throne of the Seven Kingdoms, preparing to stake their claims through tempest, turmoil, and war. It is a tale in which brother plots against brother and the dead rise to walk at night. Here a princess masquerades as an orphan boy; a knight of the mind prepares a poison for a treacherous sorceress; and wild men descend from the Mountains of the Moon to ravage the countryside. Against a backdrop of incest and fratricide, alchemy and murder, victory may go to the men and women possessed of the coldest steel…and the coldest hearts. For when kings clash, the whole land trembles.

The following may be accidentally spoilery. I won’t directly spoil without warning, but some of my phrasing of events might hint at things you might not wanna know ahead of time, so tread with caution.

A Clash of Kings is a spectacular continuation of A Game of Thrones. The character development for each character has furthered, the plot has thickened, the writing and imagery is wonderful as always. I think what I like the most about this installment is that more places were explored than just Winterfell, King’s Landing, The Wall and Vaes Dothrak. It gave me a larger picture in my head of who is where and what is happening when. The land this story takes place in I want to run around in. …with like fifty guards, but whatever.

Another thing that I really liked was that I began to hate characters I previously liked. Not because they’re bad characters, no, but because they’re developing so well that I know for a fact that if I ever met them in real life I’d hate their guts. The characters in this book to me feel like they’re real people, both the ‘good’ and the ‘bad’, but honestly, the lines between the two are starting to blur in this book and I love it. Some characters in the first book that I disliked I’m starting to feel sympathy for. Some I liked I know despise. Some I hated I still hate. *cough*Joffrey*cough*. Some I liked I now REALLY like.

The following in spoilery, I warn you! Skip to the next paragraph to get back to safe reading if you don’t wanna know! I wanted to mention these parts specifically, because they made me hate a particular character the most (and really like a couple others). Lemme start with this: Theon is a dickhole. Holy doody he’s an ass. I’m talking about two parts in particular: When he first meets his sister and when he ‘kills’ Bran and Rickon. The first, the fact that all he did was immediately see this woman as something to be gained made me sick. And when it turned out his sister was playing him, I laughed so hard and fell in love with his sister’s character. Asha is damn wonderful. At the end of the book, Theon’s fate is unknown, but I’m totally going to the store as soon as I’m done writing to get the third book, haha. So I’ll find out. I hope he’s alive so Asha can out-everything him more, haha. And for the second part… what a coward he is. I was in shock (I shouldn’t have been because of Martin’s rep, I know) but when it turns out he faked it, I was both happy and it made me dislike him all the more. If you’re gonna be evil, at least be good at it, goodness. That’s all for my spoilers.

And even if you didn’t read my spoiler, just know it actually made me like the book more. I loved hate-reading from that character’s perspective, it was fantastic. :”D

Overall, I loved this book. I want another book now. Lucky for me, it’s at the store and I can totally go get it.

Rating: 5/5 stars
There are so many punchable people.