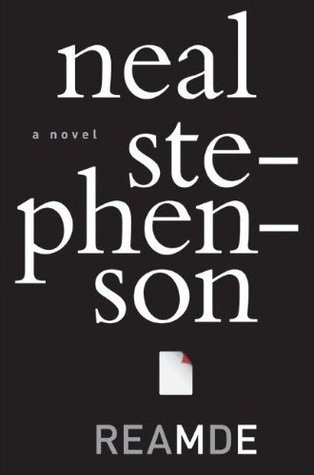 I can’t say I’ve read a 1000 page book and been entertained the whole time before.

But for some reason, obviously to the credit of the author, this book, which comes in at 1044 pages, kept me interested the whole way through. At no point did it lag, nor did the pacing slow down, for me at least.

Neal Stephenson’s Reamde is definitely a thriller, and while it’s also classified as science fiction, I’d say barely just, if you squint. It involves a video game that doesn’t exist, but otherwise, it seems very current-technology-era, maybe even a bit dated from it being written in 2011. So don’t be scared off by the categorization of ‘science fiction’ if that’s not something you typically read.

This books follows a small set of main characters – a middle aged draft-dodger who’s become wealthy and successful by inventing the video game mentioned above, his adopted, computer-wizard niece from Eritrea, some Russian mafia guys, some Chinese hackers, some British government agents, and some middle-eastern terrorists. I gotta tell ya, this plot is all over the place, but it just flows so well.

The beginnings of it at least, start when a computer virus – Reamde – made by the Chinese hackers ransom locks some files wanted by the Russian mafia while inside a resort owned by the video game creator. And it just goes from there. Honestly I can’t even begin to go farther into the plot because it really just goes everywhere.

So plot-wise, for being a 1000 pages, it was pretty fast-paced. As said, it didn’t lag or anything, and while it did definitely get a bit convoluted, at no point did it cross into jump the shark territory. The continuity and segues into new plot points were really good and kept me coming back.

The thing I did have a problem with, the thing that kept me from loving this book, was the vocabulary. Like… when I first started reading this book, I thought it was written in the 80s, going by the language the author was using. There were dated, offensive terms for black people, for homosexual people, and for special needs people that haven’t been used in a way that was ‘accepted’ in normal society for a loooong time. Like, they were sprinkled throughout the book, spoken by characters as if they were normal, characters not written to be racist or homophobic or anything like that. They were also in the narration itself at times. So I was reading this and I thought, ‘this is probably an old book, product of its time’. But nope, it was published in 2011. So like.. while I really liked the story, the vocabulary really made me hate it at the same time. I don’t know if the author feels that the terms are ‘normal’, or maybe this was originally drafted in the 80s or what, but it really rubbed me the wrong way. I have no idea how it got passed the editor, to be honest.

The thing that confused me the most about the weird vocabulary was it was combined with a very diverse cast of characters, all of whom were fleshed out and fairly well developed. It was just a weird dichotomy, seeing a really nice cast combined with the rocky vocabulary. I don’t know. It was… bizarre. I don’t remember this vocabulary being in other books I’ve read by Stephenson, so I have no idea what was going on.

So yeah overall: really neat, windy plot, good characters, great pacing. Vocabulary? Don’t pick this up if you don’t wanna be subjected to it. It can definitely be offensive.

Hi! On Monday, I attended a reading of Neal Stephenson’s latest book, Fall, Or Dodge in Hell, which came out earlier this month. He came to my city and read a few passages from the book, and then had a question and answer session afterward. It was really neat, and hearing his writing read allowed by him was really interesting – the way he emphasized exactly what he intended to be emphasized was probably the ‘purest’ form of the writing I could digest. I went with my husband, Katy @Bookbinderway and Sarah @WindsorWrites, and I’m pretty sure we all had a good time. 😀

The price of admission also came with a signed copy of his latest book! So here’s a shot now, but it’ll also be included in my haul tomorrow.

This is the first time I’d been to a reading hosted but the author themselves, and it was a unique experience. I think I’d like to do more in the future. There was also a book signing after the event, but I didn’t stay for that bit. I’m honestly not a huge fan of meeting celebrities/authors/whatever, at least in a meet and greet, signing stuff kind of way. It’s nothing to do with them, I promise. It’s me, I don’t handle the stress well, haha. I’ll probably write a post on it at some point.

But! It was a good experience, and I’m glad I went!

Ignore what I said about my next book haul being after the holidays. Between a bookoutlet order and a trip to Half Price Books, I got these.

I’m not expecting to get many if any books at all this Christmas, so hopefully I’ll be able to read most of these before getting anymore. Anyways, onto the books:

I’m not going to go into detail, but if you’d like to hear more about a book, just let me know. :”D Otherwise, titles are:

The Final Empire, The Well of Ascension and The Hero of Ages by Brandon Sanderson

The Diamond Age by Neal Stephenson

The Glass Sentence by SE Grove

The Time Traveler’s Almanac by a buttload of authors

Dreams of Gods and Monsters by Laini Taylor

A Christmas Carol by Charles Dickens

And that’s what I have acquired since my last haul. :”D Hopefully I’ll get to at least the Christmas ones before the new year. And the rest… well, hopefully soon after that.