Hello! The past two weeks, I’ve been in Washington DC for Otakon and New York City for my anniversary! I got some stuff along the way, and this is it! This won’t include any books or manga picked up – all that will be in my book haul at the end of the month. 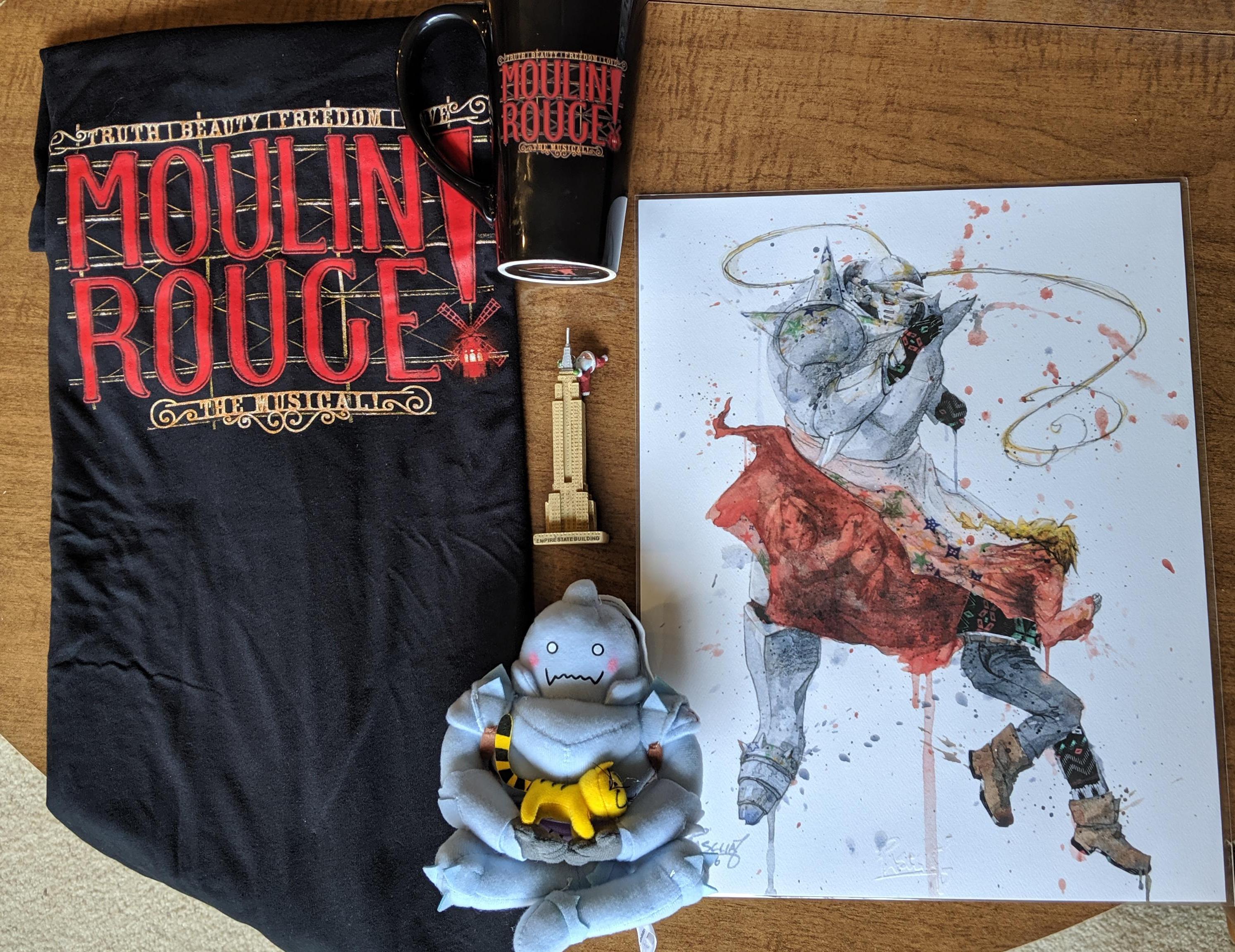 It didn’t really occur to me how much I bought myself vs other people on both of these trips until I gathered everything up and went, ‘Wait, this is it? I swear I got more.’ Apparently I’m a gift giver while on trips. I actually purchased probably twice as much as is shown, but none of the rest of it was for me.

So, I quickly realized during Otakon, when I was walking around in the Dealer’s Gallery and Artist Alley, that it’s hard for me to justify spending thirty or forty dollars on figurines or whatever that will do nothing other than sit on my shelf. That unfortunately, was most of what was for sale. I mean there were shirts and manga and stuff too (I did buy manga) but you know what I mean, haha. If you’ve seen posts where I detail stuff I have sitting on my shelves, you’ll see that most of it is gifts or inexpensive little trinkets or whatever. I just… I can’t get around the mental block. So I didn’t buy much for myself.

My weakness though is Alphonse Elric from Fullmetal Alchemist, so I pushed myself to get a few things of him. I am really happy with what I got! The art on the left was one of two pieces I art I purchased – the other was for my sister. The art is easier to justify for me because I actually like hanging things on my walls. The plush… impulse purchase. I was literally walking out of the dealer’s gallery when I stopped and backtracked when I saw this out of the corner of my eye. It’s super cute though, so I like it. It… will likely end up just sitting on my shelves. Ahaha

While in NYC, I saw the Moulin Rouge on Broadway. It’s my favorite movie ever, so the whole reason for the trip was to go see it. The show itself was pretty good! They updated a fair bit of it though, which some of it I liked and some of it I wasn’t thrilled about. But overall it was a really good show and I enjoyed it. I think I’m actually going to rewatch the movie again soon too.

On the right is a photo of our newest Christmas Ornament. Every year, I buy a new ornament, trying to find one with the year on it (or I’ll write it on if I can’t find one with the year). I started doing it the year my husband and I moved in together back when we were dating in 2014. It’s a tradition I picked up from my mom, who has done the same thing since I can remember. At my parents’ house, there are Christmas bulbs dating back to 1987, the year my parents got married. So I’ve kinda adopted it to trips since my husband and I travel a lot – I’ll buy an ornament related to the trip! This one is, well, Santa climbing the Empire State Building. I mean, why not, right?

And that’s it! That’s all I got during Otakon and while in New York, at least non-book-wise. I picked up a fair bit of manga on Otakon, and I purchased myself one book in NYC, so those will show up in my haul in the next week or so.

If you’re interesting in the instagram stories I posted during either of these trips, check out the Otakon pics here and the NYC pics here! (Shameless plug, shhh)