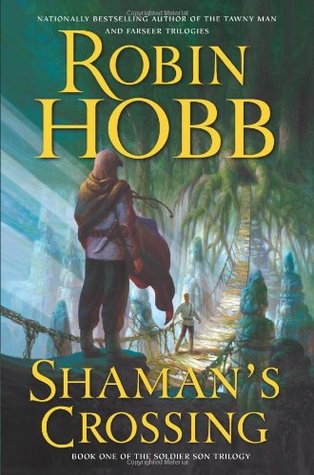 After finishing Robin Hobb’s Realm of the Elderlings world I was left pining for it. For the characters, the world, the plot, the sheer depth of it all. After letting it sit for a bit, I picked this up, hoping it would fill the void. And I gotta say, I think it has.

Shaman’s Crossing is not an Elderlings book, first off, and it doesn’t pretend to be one. It starts from the ground up, crafting an all new world, characters, magic systems, and political strife. Shaman’s Crossing is a wholly different book, but to me, I could still see the Robin Hobb-y-ness of it all, and I quickly became smitten with the thing.

This book follows Nevare, a second son of a second son, destined to  a soldier, as he grows and learns that the world around him is not what he had anticipated. The story begins with Nevare as a child, where he lives with his father, a soldier-turned-lord, on the frontier of quote unquote “civilized” society and the unclaimed lands, populated with magical people known as the Plainsmen. Nevare as a child is innocent to the existing prejudices and political pressure existing in his world. He gets hints of it here and there but being a child, he’s not fully comprehending what he’s seeing. As the reader, you can fully grasp what’s going on while Nevare cannot, and it creates a sense of unease.

As the book continues, Nevare grows older, and social roles are cemented into his head. The social system in this book is very patriarchal, and Nevare just flows along with it. At first, once he was grown, I found him frustrating with how ingrained this patriarchy was in his head. Robin Hobb being Robin Hobb though obviously wasn’t gonna let that lie: she’s the queen of character development after all.

Nevare finds himself placed in a military academy and immediately his mental schemas of how the world works and who fills what roles are challenged. He finds himself constantly realizing that yes, he’s a bit of a dick, and no, people don’t fit into these stereotypical boxes like he thought they did. With every chapter, Nevare’s expectations of the world crack just a bit more, and it was really great seeing him mentally process all of the new interactions and people he met that didn’t quite fit in his interpretation of his country.

The magic system(s?) too, are really cool. Shamanic in origin, they deal with spirits, spirit worlds and how they can entwine the physical realm, influence it, and even force it to change. Robin Hobb blended the metaphysical with the physical in a way that was enthralling, and tied it in with the social norms of the world so well.

It plays on one’s reluctance to admit to anything supernatural, it plays with established religion versus spiritualism, it plays with feelings of religious doubt, it plays with seeing proof before one’s very eyes and still not wanting to admit that one is wrong.

It plays with people’s reaction to the inevitable, when they see it happening and choose to ignore or disbelieve it. Funny how fiction imitates life.

For a first book in a brand new series, it touches on a lot: prejudice and racism, sexism, patriarchy, fatphobia, colonialism, occultism, spiritualism, bullying, classism, and a lot more.

The story as well is compelling. It was as rich as a Robin Hobb book normally is, and was just as inviting. Even though I mentioned I had frustrations with the main character, I also cared about him too. As the plot played out, I found myself worrying for him, even when I wasn’t actively reading the book. The side characters were well put together, and each brought something new and unique into Nevare’s world.

Originally I rated this books a 4.25. And honestly I’ve been sitting on this rating for a while, thinking about whether or not it was the right call. I buddy read this with Zezee @Zezeewithbooks, and she gave it a full 5 I believe. I finished this book probably last month or so, and having sat with it and thought on it, and having found myself being brought back to it over and over again across the past few weeks, I think I agree with her, actually. This book was definitely a five stars. The initial experience was great, but the after-effects, the way it stuck in my mind, made it even better.

I’m starting the second one here imminently, and wanted to get my thoughts out before they melded together with this next book’s. So here we are, and once again, Robin Hobb has swept me off my feet.