I realize I just posted my Blogmas schedule yesterday, and that today was supposed to be ‘Update 3’, next week ‘Update 4’ and then December 1st the results, but I was also planning on like… not finishing until then. But I ended up finishing early, so today is results! The other two planned nano posts will be subbed to something else, I’ll figure it out.

But yeah, I won! And honestly, after fifty thousand words, I barely got through act 1. So my novel is not complete, I just beat Nano. I’m going to give myself some time off and come back to it, because man am I burnt out.

Here are some stats!

So as you can see, my daily word count was all over the place – I was never consistent, except in that I was over the goal word count every day, no matter how much or little I wrote.

When Nano first started, I took November 1-3 off from work so I could get a good boost. I knew that this month was gonna be busy so I wanted a cushion. Lucky me though (or unlucky?) my month cleared up shortly after that, and I was able to maintain a nice lead.

Honestly, I really owe it to my buddy, who did writing sprints with me almost every day. She’s doing Nano too and is gonna win any day now, I can feel it!

So that’s it! Nanowrimo 2020, at least for me, is over. I really like what I made, though it needs some serious revision. But I definitely think it’s got potential.

This year, I won! I hit 50,000 words back on November 23rd, so this last week I’ve been coasting, pre-writing blogmas posts, etc. It’s been a nice relaxer.

Is my draft any good? No! It’s awful! But it exists, and that’s the important part.

Here are my stats: 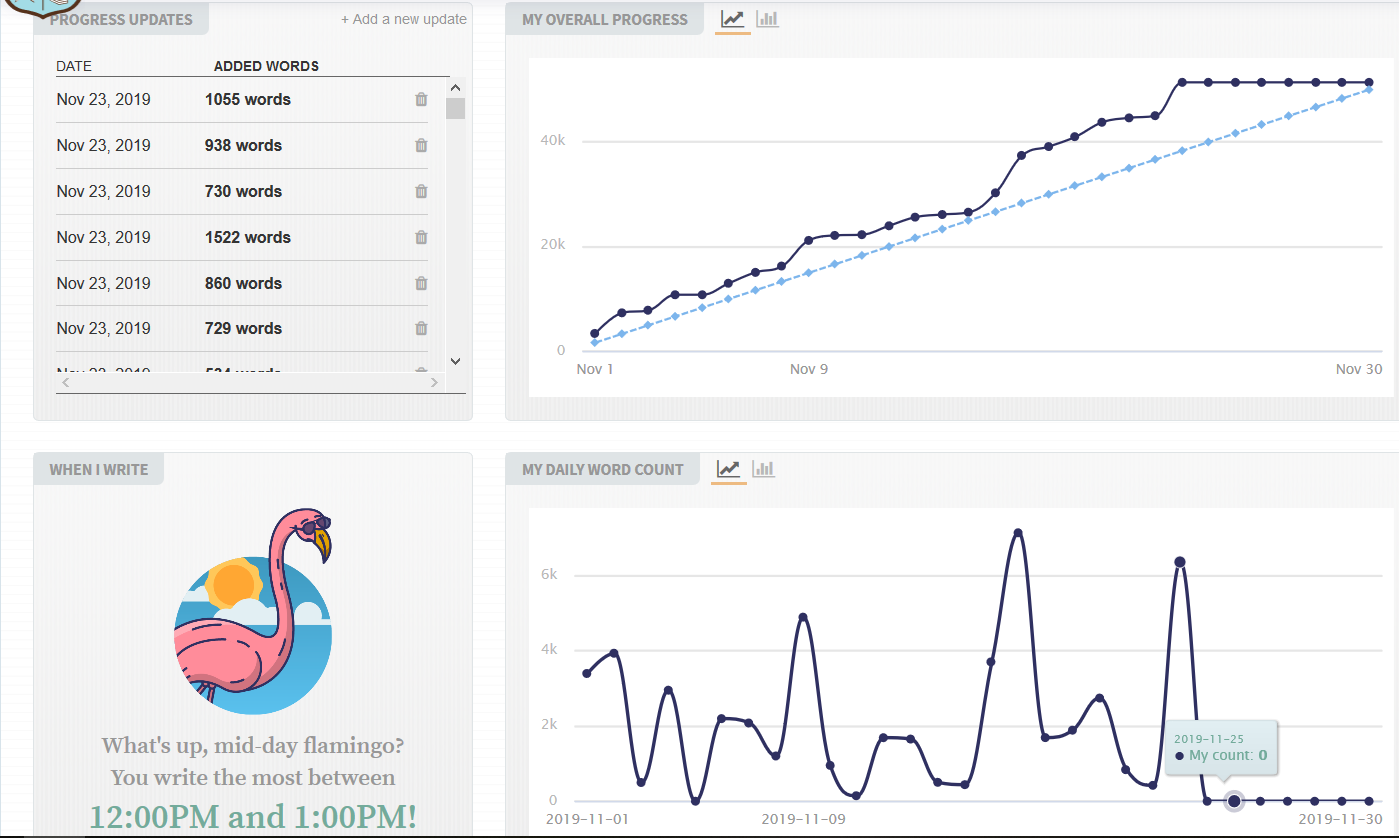 Obviously for the last week I just chilled. Once I hit the 50k, I went ‘this is heinous’ and stopped. When I start up again, I’m actually going to dive right into draft two instead of finishing draft one because man, it’s really bad.

Otherwise, you’ll see spikes in daily word count – those are weekends, mostly. My buddy Ashley and I had write-ins every weekend, it wasn’t unusual for me to get out 5 or 6k during once session. It was really helpful (and she ended up winning too, for the first time!)

So, Nano is done. I’m going to give myself a bit more of a break, then I’ll pick it up and try fixing it to be like… a comprehensive narrative.

And that’s it! Until tomorrow!

I ended up hitting my 50k word goal on November 25th, so the past five days I’ve been schmoozing. The 25th, a Sunday, I wrote over 9000 words. My original goal for that day was 45k, but I got to that point and decided I was on a roll, so I just… kept going!

I was a bit of a Nano Rebel this year – I rewrote a plot idea instead of starting fresh. All the words were new, though. Also, this is the first year where I tried any sort of outlining and prep. And I must say, it did help.

I almost must say that I very much enjoy improvising. I ended up throwing all sorts of things in that weren’t in the original outline, and I ended up reaching the end of the outline around 40k words. Sooo the last 10k words were all improvised, but it ended up working out well.

This year, as mentioned, I outlined. But, the way I would get in 1000 or 2000 (or 9000) words in a day was by doing word sprints, both with friends and by following along on the NanoWordSprints twitter account. Two fifteen minute sprints would have me spouting out 2000 words. They were my life line. I also sprinted with a buddy, Sarah @WindsorWrites! She and I zoomed through some words during my lunch break at work, which was kind of a surreal thing to be knee-deep in computer code, pop into a fantasy world of my own creation, and then fall back into the reality of if statements and for loops. It was fun though! I had a good time.

Something else happened this Nano which totally made my entire month. As I mentioned earlier, I’m rewriting a plot that I’ve used before. This plot I actually thought up the fantasy world for back when I was 18ish, so a decade ago now – at the time, I drew maps for it, came up with countries and politics and religions and character sketches, so on and so forth. I did a lot of world building for this thing.

And then I lost it all. I lost the notebook I wrote everything in during a move. I haven’t seen it in years.  So I’ve been rewriting this plot based on a world that only existed in my memory. I never rewrote any of the world building, in hopes of finding the notebook, because I remembered really liking what I had made.

And then, maybe 35 or 40k into the book, a memory popped into my head.

Past me had at one point, joined a world building writing contest. I found the website where I joined, and logged into my account, and… there it all was. All of my worldbuilding was there. All my maps, all my sketches, all my religion diagrams. All of it.

I was in the middle of a writing sprint, so I used the word count post for that sprint to share my blathering joy at finding my worldbuilding. Seriously, I was about ready to cry, I was so happy.

After I won, I bought myself a Nanowrimo Winners shirt, which I’ve never done before, despite winning Nanowrimo a total of four times now. Why? Because this is the first time, the first time I’ve ever finished a draft. I finished. a. draft. And I actually like how it turned out! So I splurged on a shirt, not only because I won, but because I actually wrote a book. It’s currently a shitty book that needs a buttload of editing, but it’s a book, dammit. I wrote a book!

During all my prep, I bought a story binder among other things. During December and January, I plan on updating the binder with all the worldbuilding that I’ve now regained, and add new character sheets, yada yada. I want to make the binder an actual source of information for the story.

Another plan, which is weirdly related to my job, is to finished draft two by Nanowrimo next year. I want to start a fresh story next year, and I won’t be able to let myself unless I have another draft of this done first. And it’s tied to my job because I had a meeting with my supervisor the other day, and he asked what personal goals I had, and I mentioned writing a second draft. Soo he helped me detail out a bit of a game plan for it. So yay, now my boss knows I’m a nerd, woo.

So! This has been my most successful Nanowrimo ever. I won, I finished a draft, I have a decent amount of worldbuilding and reference, I have plot outlined for the second book, I actually liked what I wrote, and I finished early, which I have never, ever done.

As I’ve mentioned in the past few posts, I participated in Nanowrimo this year. I’ve been doing so every year since 2011. The only years I’ve ever won were years where I wasn’t in college. Any years that I had finals to study for, Nanowrimo always failed spectacularly for me. That pattern held true again this year – no school, so I won! 😀 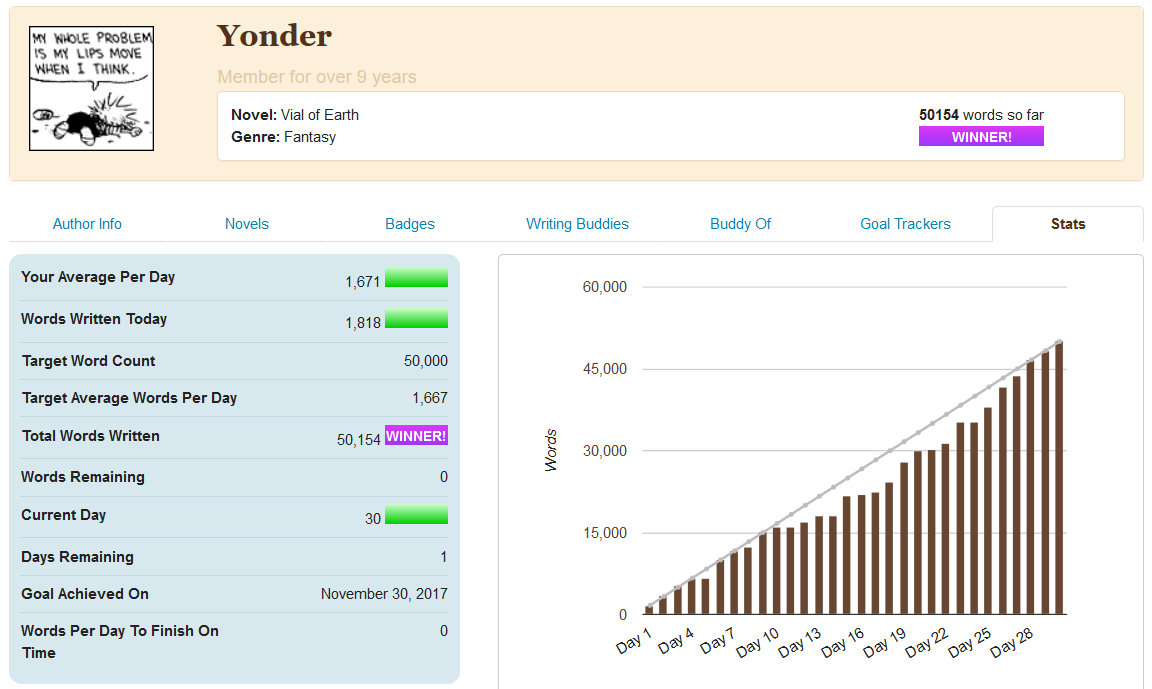 Is it any good? No! I need to delete about 5000 words straight off from scenes I know won’t be staying, then I can begin editing. Right now it’s a piece of doody.

If you participated in Nanowrimo, lemme know how you did!