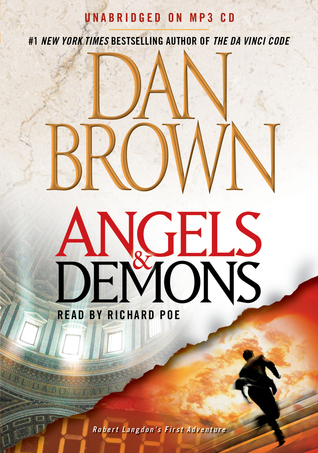 Angels and Demons by Dan Brown

I read this book as part of my TBR Jar Challenge. This book fulfilled the ‘read a book someone else picks for you’ challenge. I must tell you I never would have picked this up otherwise. It’s completely out of the range of what I normally read. Though, I’m glad I did read this – I rather enjoyed it.

If you’re not familiar with Dan Brown, he’s the author that wrote The Da Vinci Code and when I was recommended this book, I was surprised to see it was the first in the series that The Da Vinci Code was the second of (ignore how grammatically terrible that sentence is). Anybody who is a fan of Dan Brown or this genre is probably reading this like “Duh, you’re a ding dong”. But having never read or watched any of Dan Brown’s creations, I had no clue.

Angels and Demons is about a university professor of religious studies named Robert Langdon who gets swept up in a murder mystery involving anti-matter, the Illuminati, the Vatican and short shorts. Short shorts are relevant to my review, I promise.

This is the first ‘thriller’ book I’ve really read, and I gotta say, I devoured it. I’m thinking I want to try to get more into this genre as a result. (So if you know any good’uns, please leave a comment and say 😀 )

My thoughts on this book as I’ve mentioned above are mostly positive. Dan Brown’s writing style had me reading large chunks of the book in one sitting. He has a very good knack for causing the feeling of ‘just one more chapter’-itis. The chapters themselves are usually only a couple pages long, if that, so that helped. I could read fifteen pages and cover eight chapters. It made me feel like I was flying through the thing.

The plot I thought was pretty awesome. I mean, who doesn’t love reading about mysterious Satanic cults and advanced scientific technology?! 😀 I think one of my absolute favorite parts about the plot, Dan Brown’s writing, this entire book, was that I would guess about 50 pages before something happened that it was going to happen, and it kept seeming more and more likely my prediction was correct… and then Dan Brown would totally surprise me. It happened more than once, it was great! My SO, who is the one who picked the book for me, would just kinda smile at me when I was like “Ha HA, it’s YOU who’s doing the thing! I CALL IT NOW!” … “SEE SEE THE EVIDENCE IS BUILDING. I’m so good at thriller books” … “WAIT WHAT. HOW?! I’m so bad at thriller books! D:”. He’d just let me sit there and be proud of myself for being totally off in my guess and laugh at me when I found out I was wrong. Considering it’s a thriller, you know there are going to be twists and turns. I mean, it’s obvious.

So obviously this book was gonna be a 5/5 for me… but then I noticed something that I didn’t particularly find uh… good. The romance. Or… attempt at romance. It was just so damn awkward to read. It really took away from my immersion in the book. Hurry we only have so much time left! People are dying, anti-matter will destroy us all!… wait, her shorts are so short, I’m gonna be distracted by her legs for a bit and comment how her voice is magical while trying to outrun a killer. I’m gonna keep making awkward stops in what I’m doing, no matter how serious the business to admire this woman and her shorts and her voice. Gonna do it over and over – oop, a murder, oop stuck in a hole, gotta climb a latter to get out before it’s too late. Hey her legs are in view again, awesome.

It was just… really? xD I mean if you want to include romance in a thriller, by all means, go for it. BUT DON’T STICK IT IN THE MIDDLE OF A HIGH ANXIETY SCENE, GOODNESS. It totally ruined the ‘edge of my seat’ness more than once. Robert and those damn shorts.

So for me, this book I feel is a 4 out of 5 stars. Plot, writing, excitement… all 5/5 aspects. The romance, not so much. Overall, I say totally read it. It’s definitely worth it. But beware the shorts.

6 thoughts on “Book Review: Angels and Demons by Dan Brown”