Happy Saturday! Today I wanna show you all the books I’ve picked up since mid-June. All of these books though were purchased on or before August 9th, because that’s when my book buying ban started. It’s been going for a month now and I haven’t cracked yet. I almost cracked, but that’s a story for a different post. But the reason for the book ban in the first place happened July 28th, and it was the Half Price Clearance Sale. I tell ya, I went a bit nutso. No ‘buy only 8 books per season’ for me this time! Luckily, a lot of them were manga and therefore I read them already back in high school, or I’ve read them since buying them. My physical TBR didn’t go up too much. 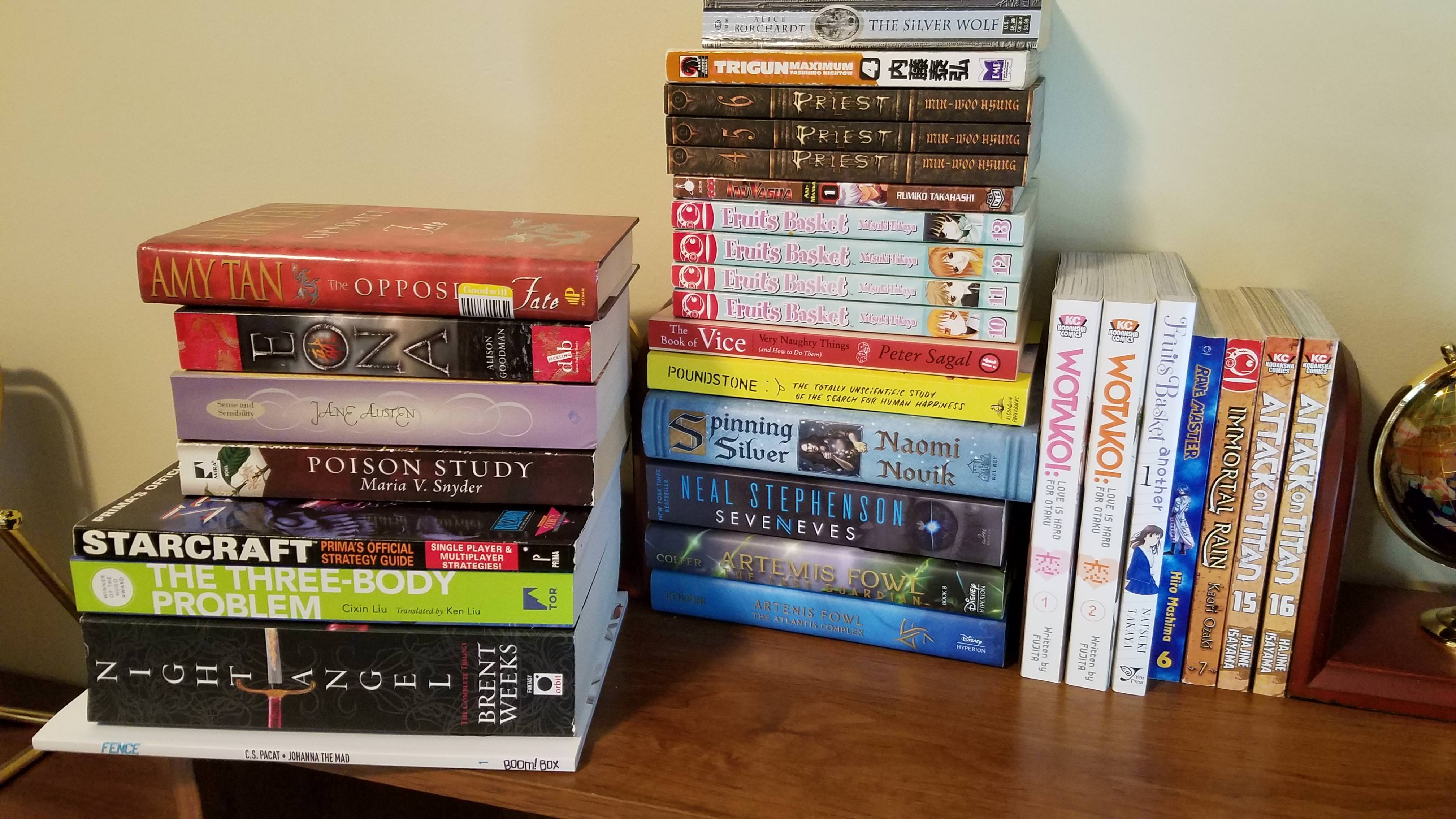 So, obviously, there are quite a few to go through. If I don’t mention where I got it, assume it was part of the clearance sale. 😀 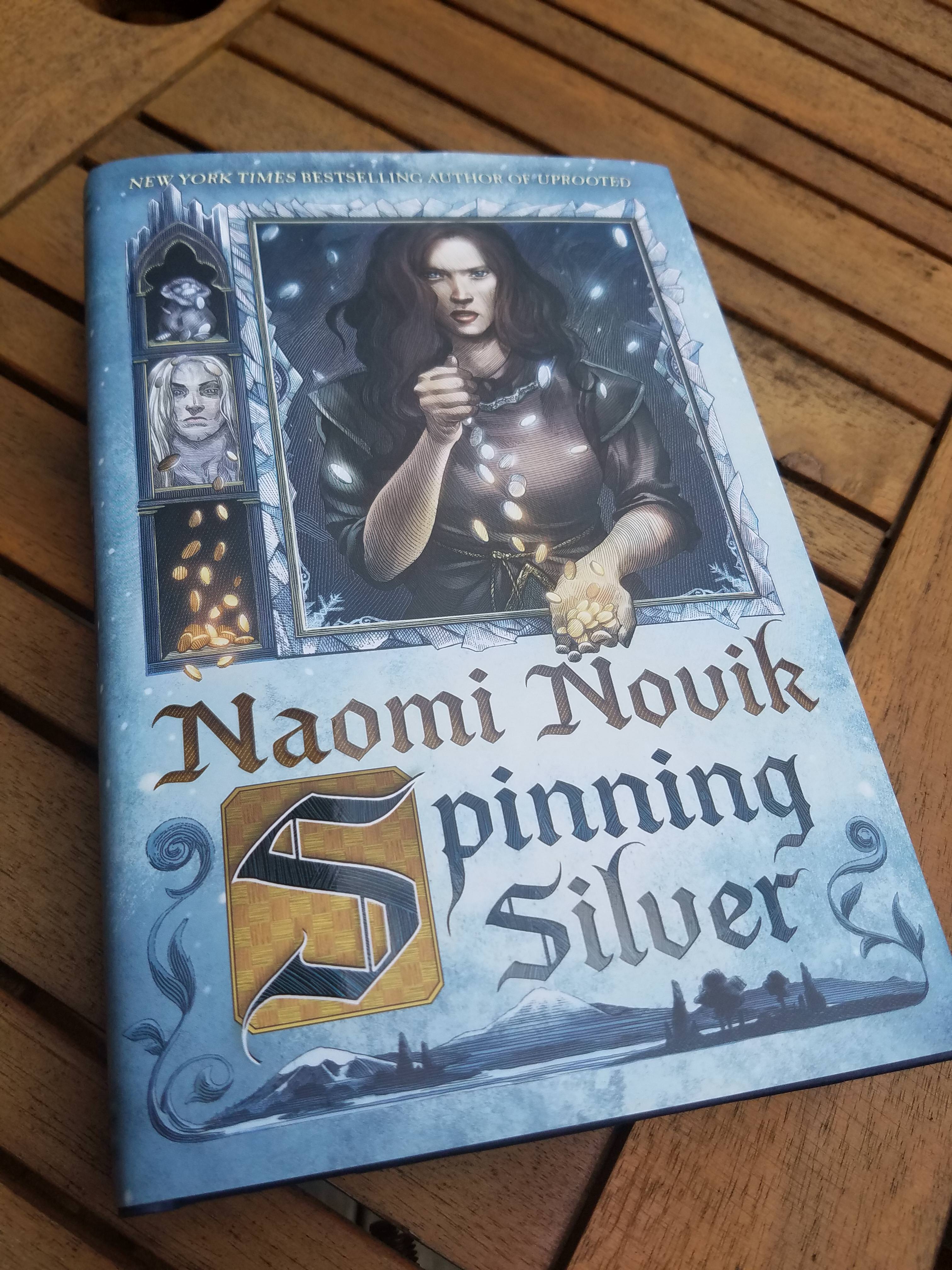 Spinning Silver by Naomi Novik – This was one of my most anticipated releases this year, and I bought it on release day and began reading it immediately. I ended up adoring it. Pretty soon I’ll have a whole Novik shelf, between her fairy tale books and her Temeraire books. 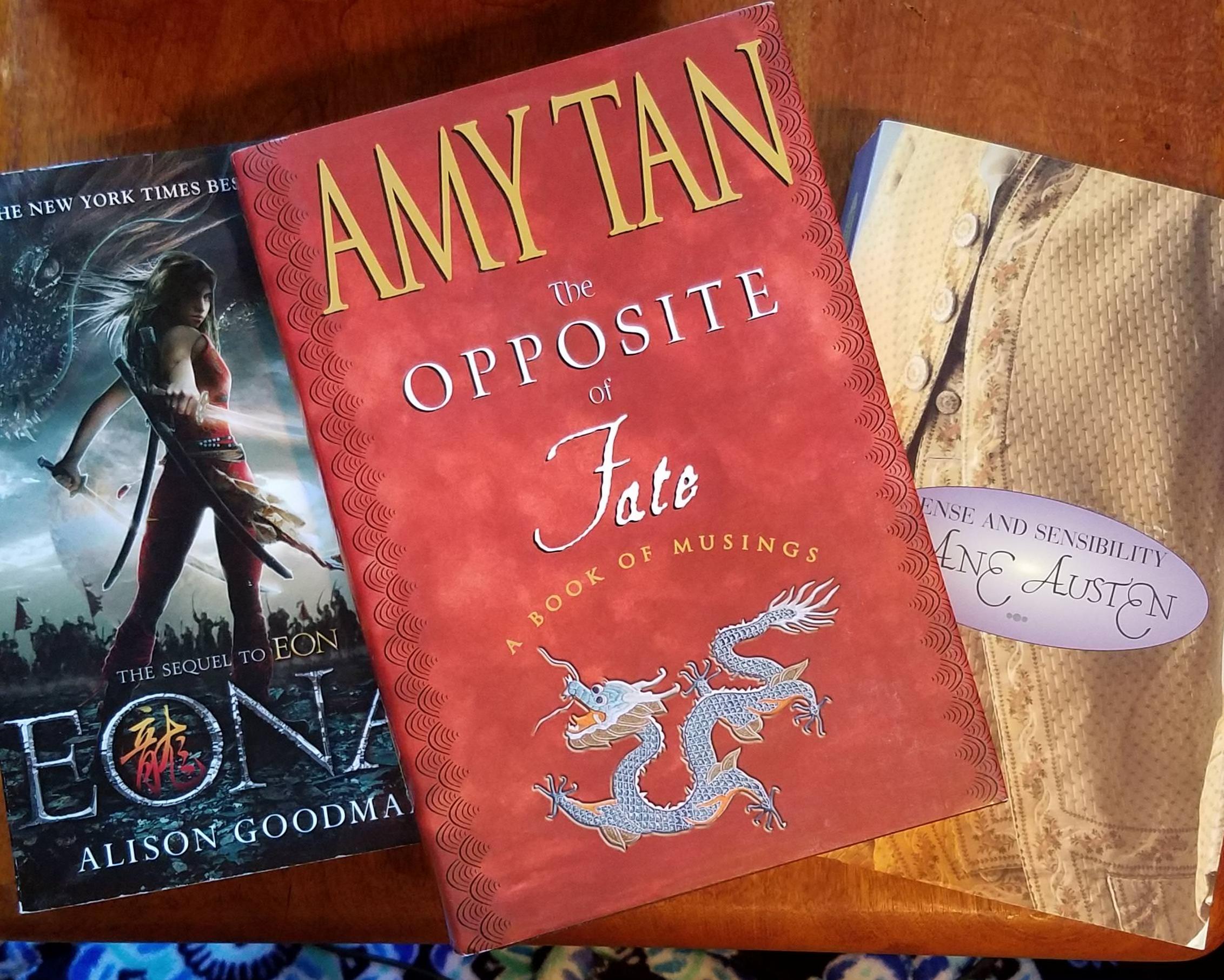 Eona by Alison Goodman – I’ve owned Eon for ages now and haven’t read it, so I figured getting the sequel super cheap will spur me into marathoning the series. I’ve heard mixed things about it, so hoping I end up on the ‘like it’ side.

The Opposite of Fate by Amy Tan – I don’t know what it is about Tan’s books, but they always draw me right in. I have.. five or six of them now, but they’re all still on my TBR. I DON’T KNOW EITHER, OKAY.

Sense and Sensibility by Jane Austen – One of my friends is always raving about Austen books, but I have yet to pick any up. This’ll be my second one, I think. Maybe third? Either way, I have no idea what edition this is – I can’t find a bar code, or an ISBN, or anything. The flap said it was printed in small quantities for some event. So if you know what this edition is, do let me know. 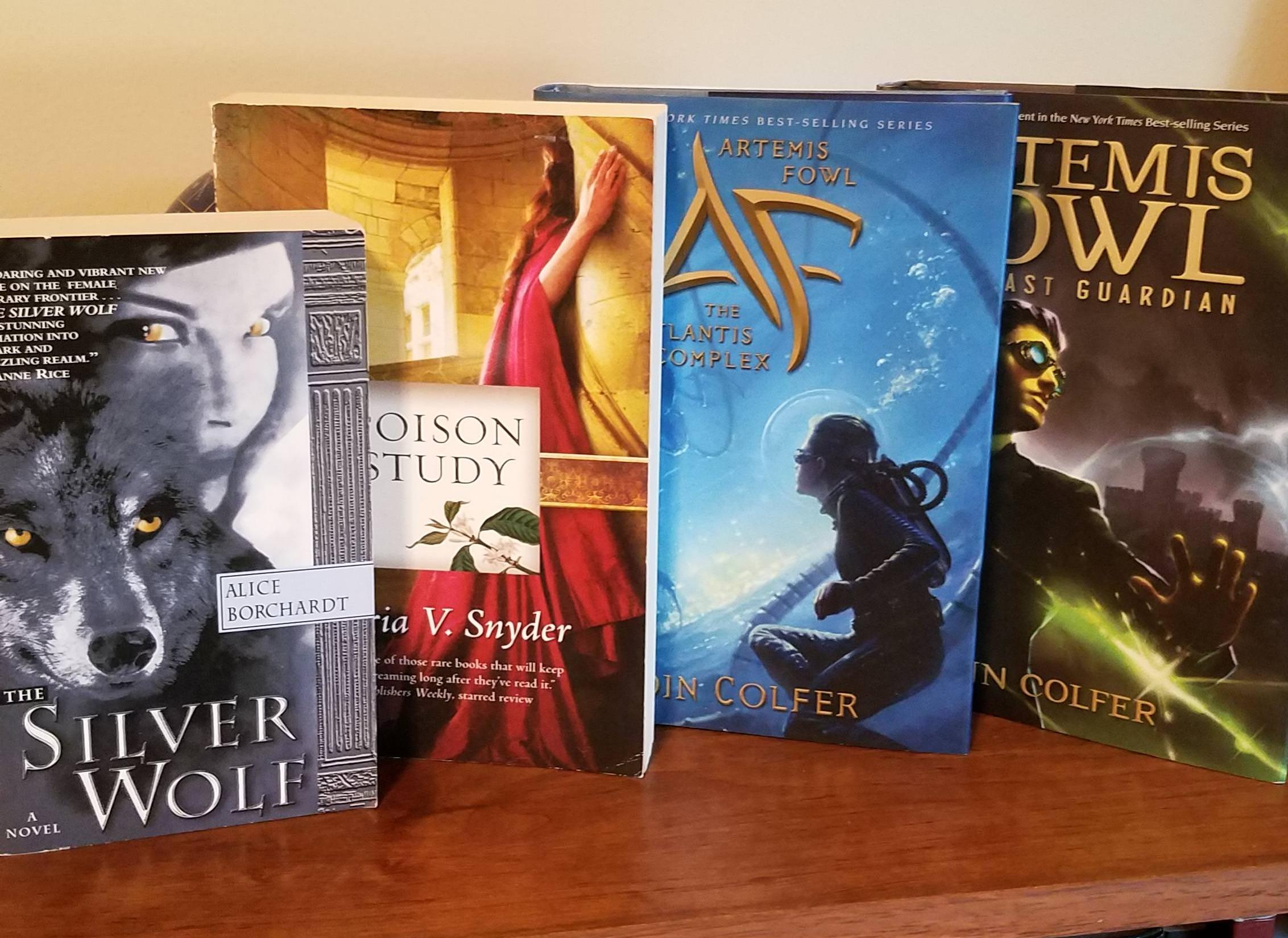 The Silver Wolf by Alice Borchardt – My friendo Katy went with me to the clearance sale (check out her blog, peeps) and she put this in my hands, saying it was one of her favorites. So! How could I refuse?

Poison Study by Maria V. Snyder – This one has been on my radar for ages, so when I saw it sitting on the table, I scooped it up lickedy split. Am v excited, people.

Artemis Fowl The Atlantis Complex and The Last Guardian – Gasp! Emily! Didn’t you already own The Atlantis Complex once, DNF’d it and purged it?! Well yes, yes I did. I don’t know man. Artemis Fowl, at least the first four books, is one of my favorite series from my early teens. I loved the early series, and getting rid of book seven felt wrong to me. So when I saw these two for two bucks each in Ollies, I got them. Maybe I’ll give it another try. Now at least I have the whole series and it doesn’t look weird on my shelves anymore. 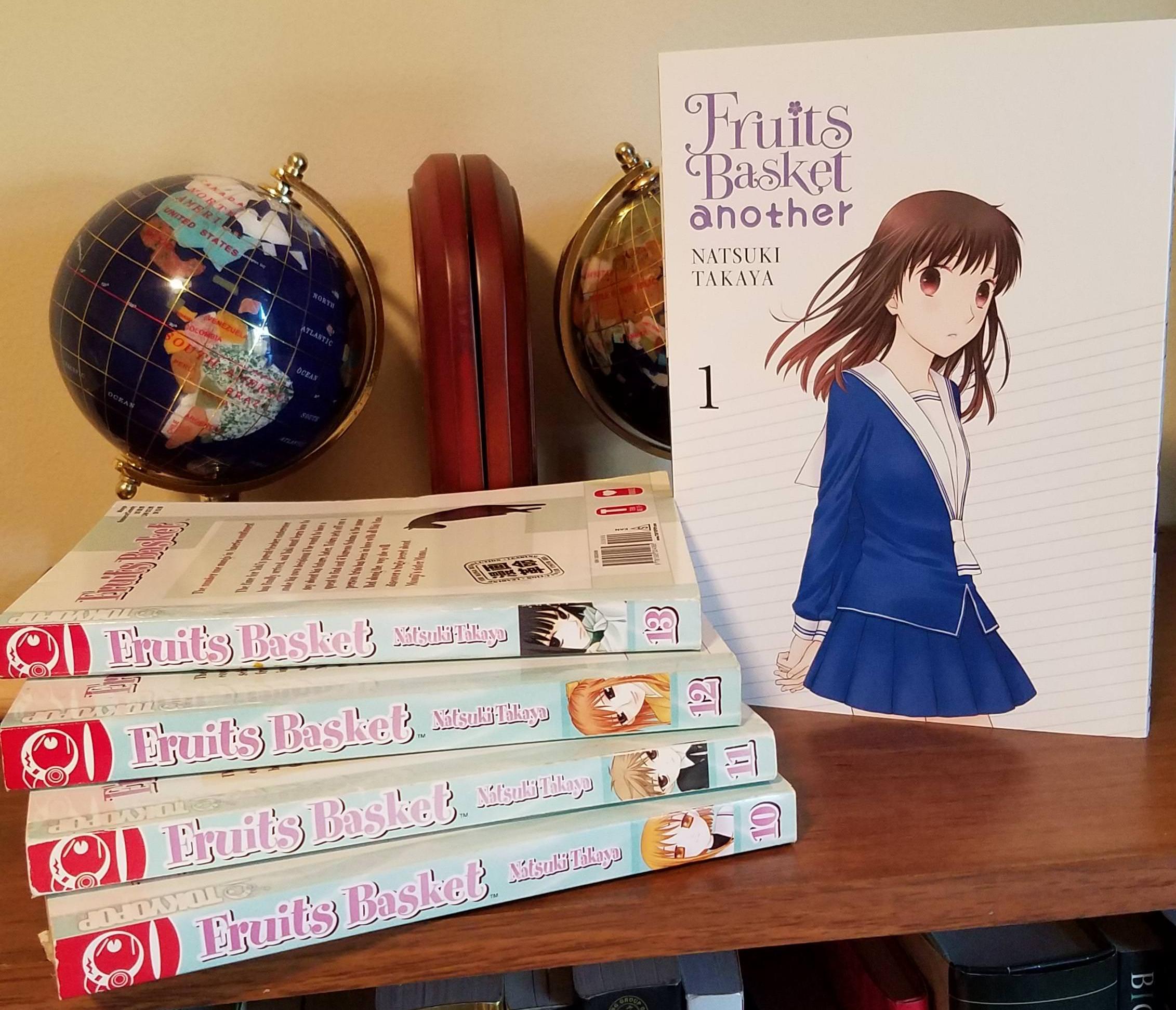 Fruits Basket vols 10-13 by Natsuki Takaya – This is a series I read and loved back in high school, but I’ve never owned the full set, so I’ve been collecting them as I find them second hand.

Fruits Basket Another by Natsuki Takaya – I had no idea there even was a sequel to Fruits Basket coming out until I saw this on the shelf at Barnes and Noble and chirped a bit. Snatched it up so fast, man. I read it and I’m v excited for more. 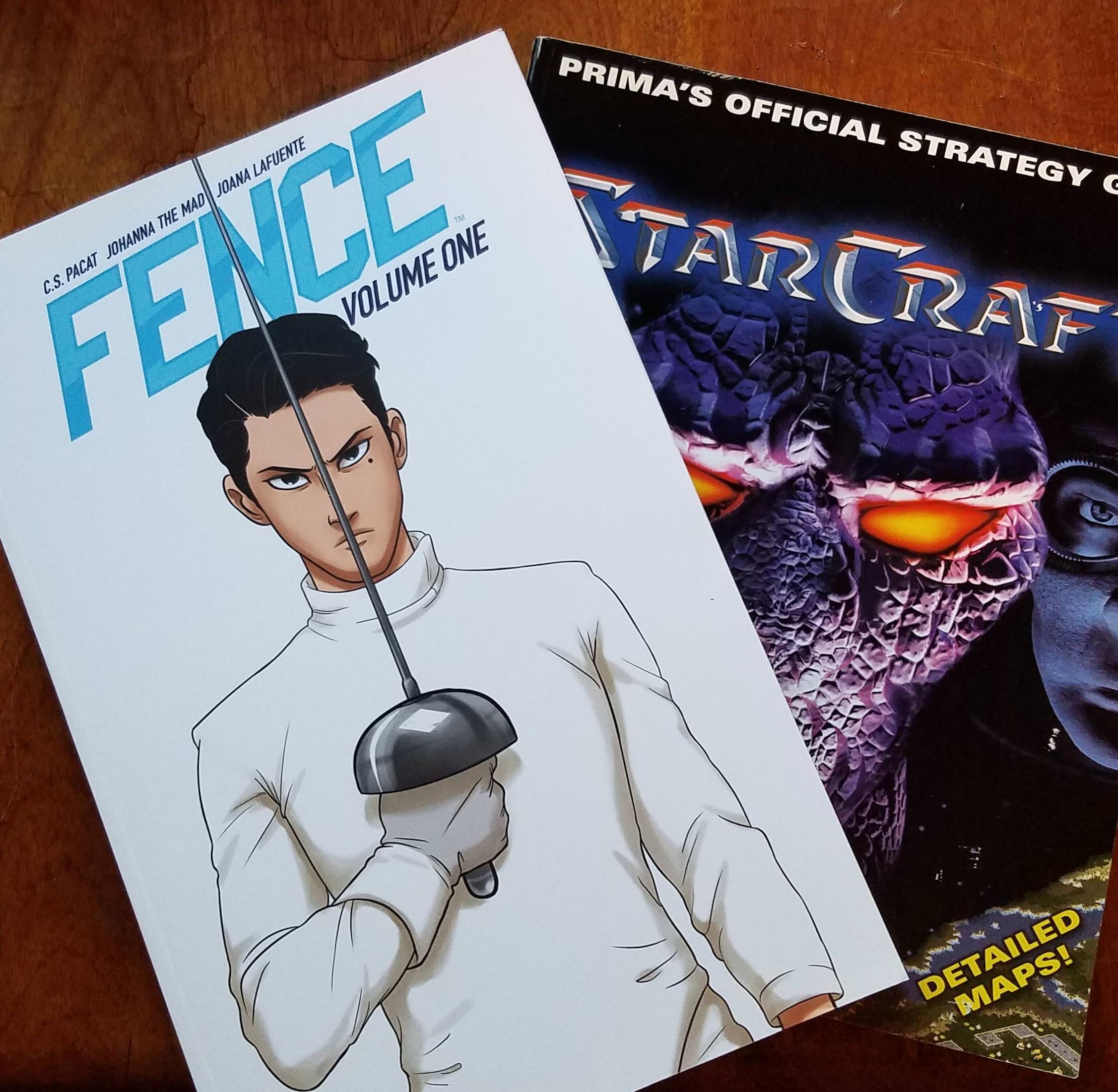 Fence vol 1 by C. S. Pacat – I’ve been waiting for the trade of this ever since I heard this series was rattling around in Pacat’s brain. I picked it up at BN. I read and loved her Captive Prince trilogy and at this point I’d read her grocery list, man. I read this and felt it was a solid opening to a potentially great series.

StarCraft: Prima’s Official Strategy Guide by Bart Farkas – This one was an impulse grab as I was walking to the checkout line at HPB sale. I used to play a lot of StarCraft 2, and this just kinda called to me. Will I ever read it cover to cover? Likely not. But! I’ll definitely flip through it – it’ll be more of a coffee table read for me. Takes me back, man. 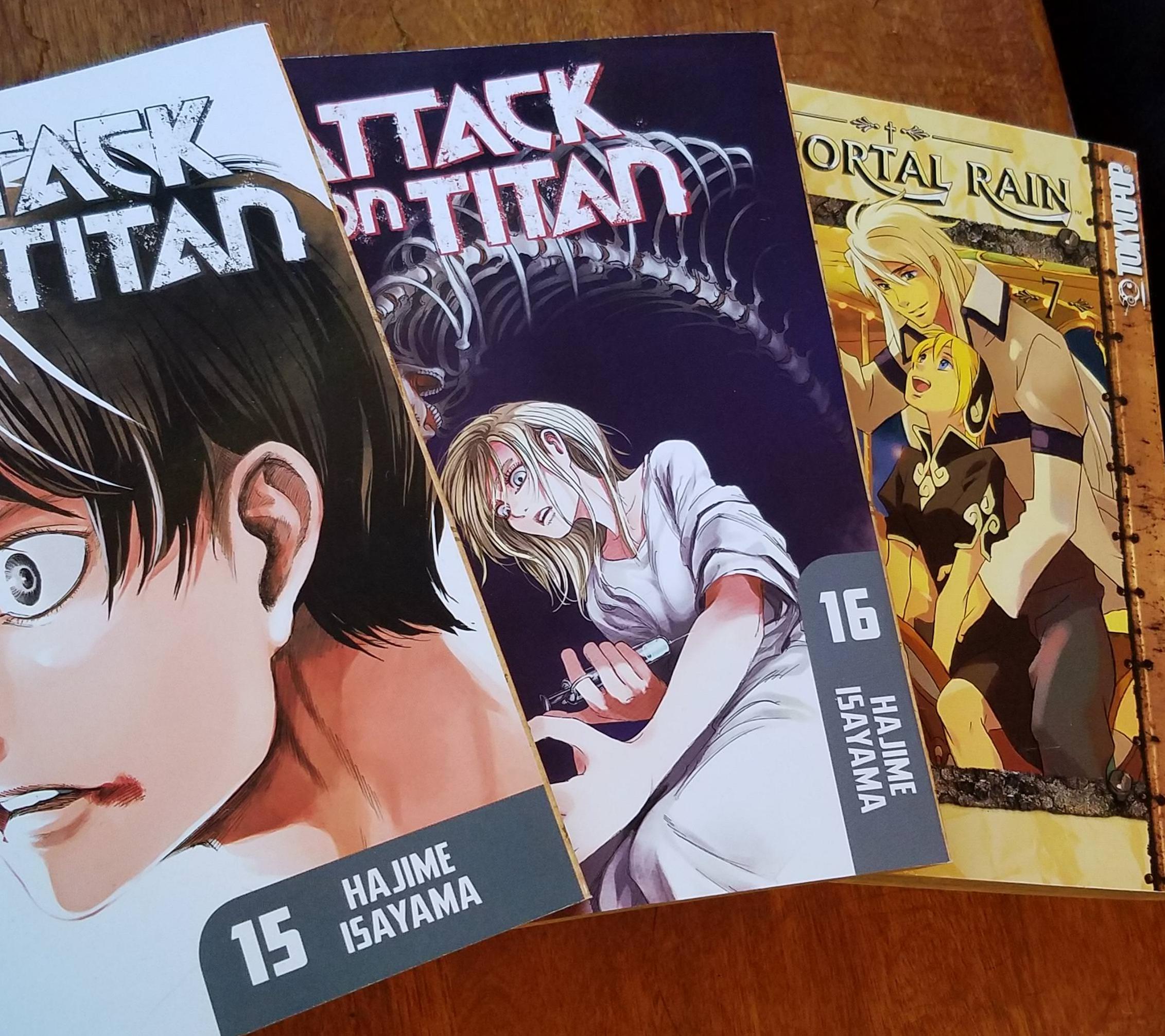 Attack on Titan vols 15 and 16 by Hajime Isayama – slowly chugging through this series. I received these two volumes as a birthday gift from my friendo Amanda (thanks pal, you’re swell) and loved them. I’m quite a few volumes behind, but each one I read I love this series more and more, man.

Immortal Rain vol 7 by Kaori Ozaki – This series I’ve had for a long time, but I’ve never seen it really go around. I own up through… well, vol 7 now, but I’ve read through vol 5. I adore it, and I need more people to read it. READ IT. 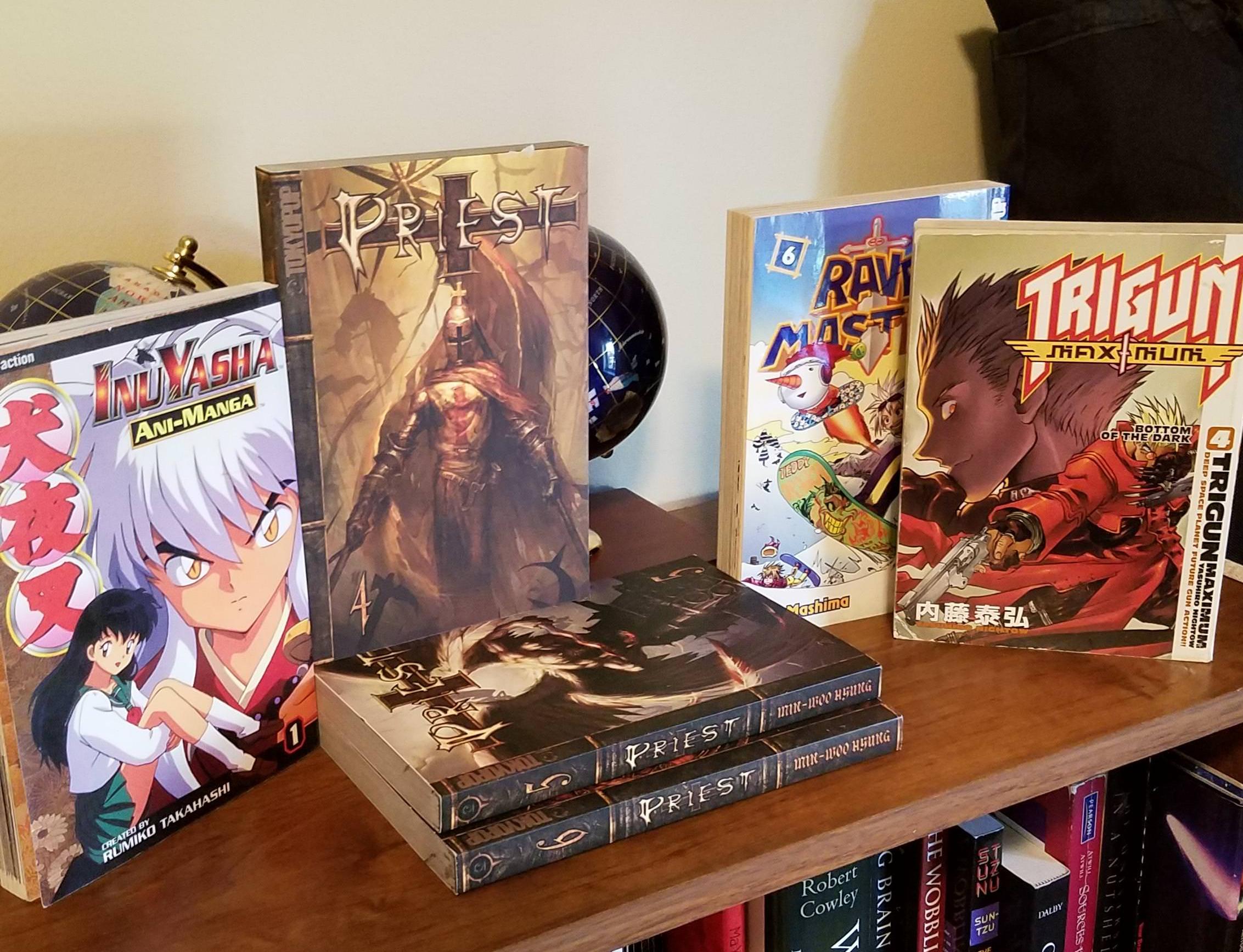 Inuyasha Ani-Manga vol 1 by Rumiko Takahashi – Love the Inuyasha manga and the anime, so combining them can only end in good things, right?

Priest vols 4-6 by Min-Woo Hyung – I picked the first volume of this up on a whim a while ago and ended up pretty much loving it. So I’ve been slowly collecting them second hand when I see them. 😀 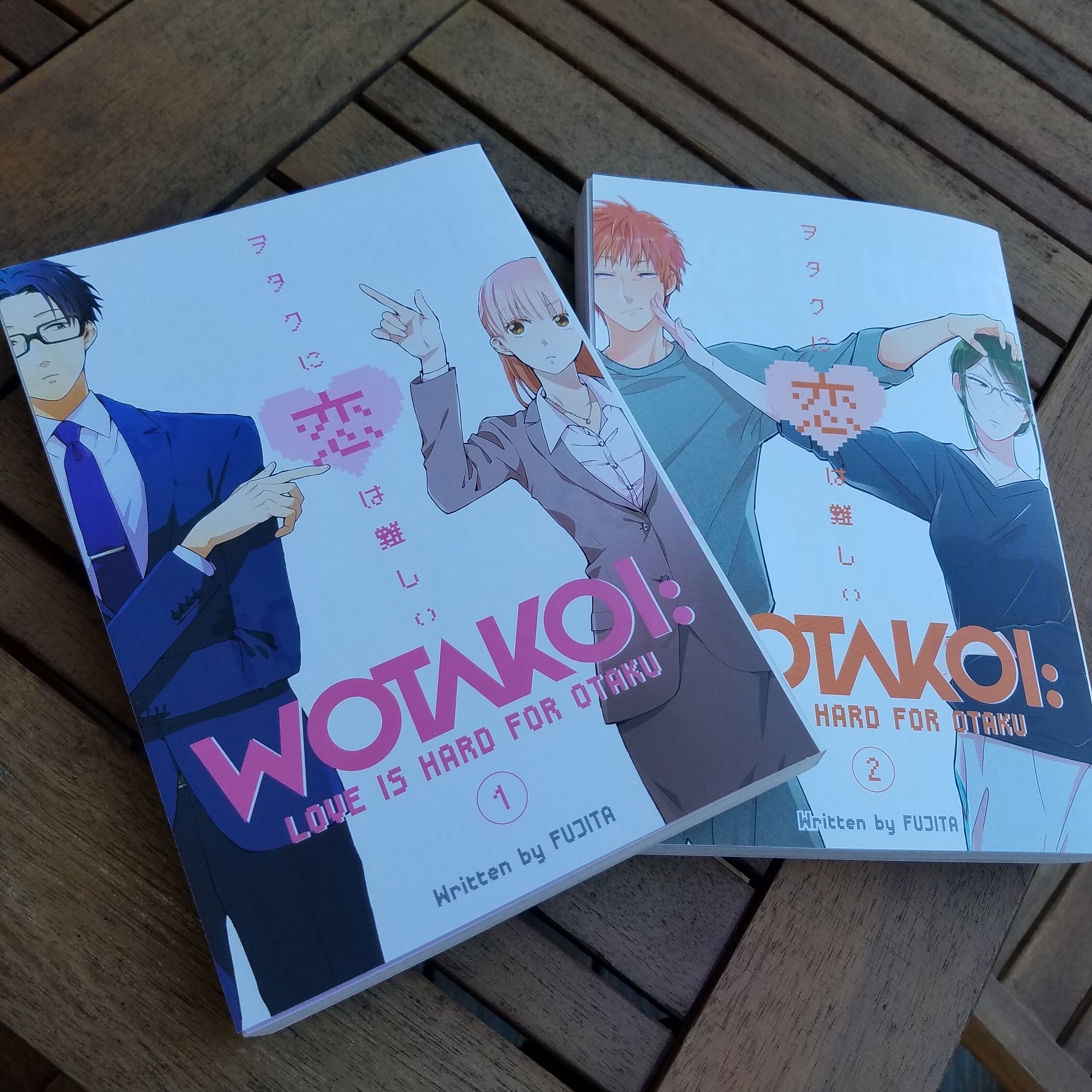 Wotakoi: Love is Hard for Otaku vols 1 and 2 by Fujita – This series is my latest obsession, people. I love it SO MUCH. Vol 3, released next month, is one of the two books I mentioned in my buying ban post that I would be making exception for. It’s just so so good. My darling husband got these for me for just because. He’s a sweet. 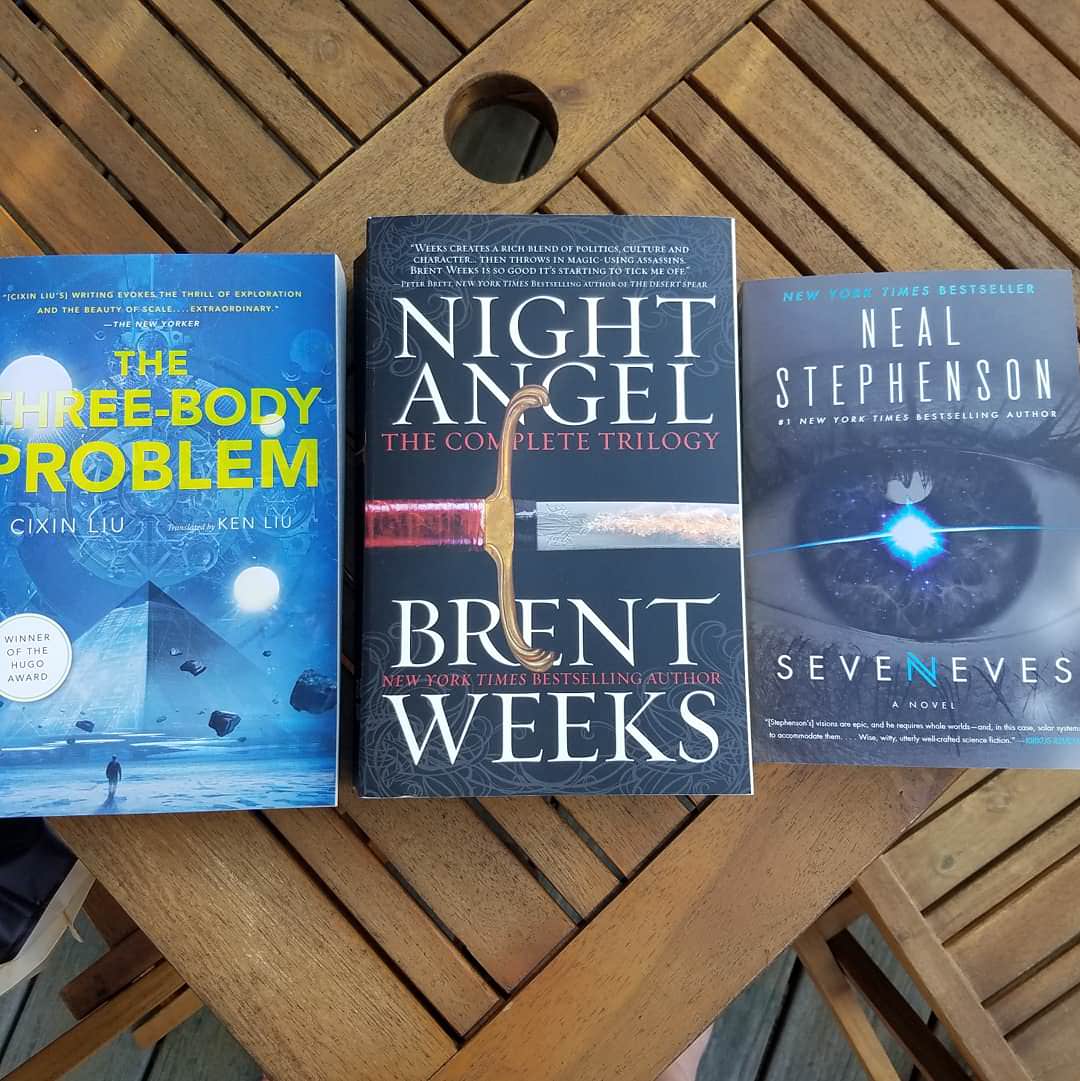 The Three-Body Problem by Cixin Liu – I. Am. SO PUMPED. For this book. It’s apparently the science fiction book to read right now from China. I want to read it SO BAD. This book, along with the next two, I got at BN during a sale that had ended, but they never took down the sign, so when I got rang up, the list price came up. I pointed out the sale sign though, the cashier went ‘whoops, that was supposed to be taken down’ and then gave me the sale price. Good peeps there.

Night Angel: The Complete Trilogy by Brent Weeks – I absolutely adore Weeks’ Lightbringer series, so I wanted to check out his previous one, too. I’m hoping to marathon the whole thing instead of reading one book at a time. We’ll see how it goes, though. ARE YOU EXCITED FOR THE BURNING WHITE? I AM, MAN.

Seveneves by Neal Stephenson – Stephenson is another one of those authors. One that I have so many books by, but haven’t read much of. I read and loved Snow Crash, so my brain goes ‘Therefore all other books are good too’ and I tend to buy them when I see them. 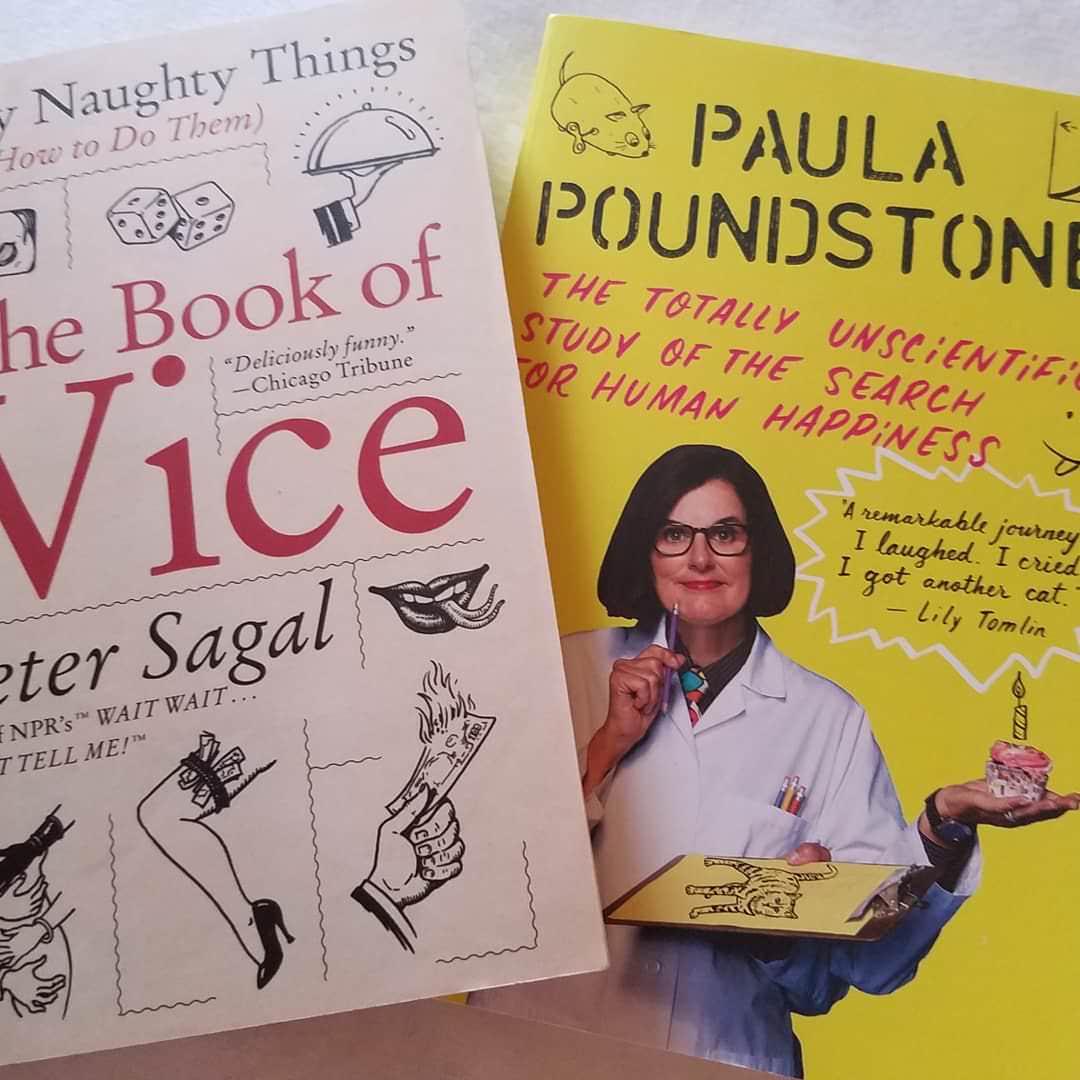 The Book of Vice by Peter Sagal and The Total Unscientific Study of the Search for Human Happiness by Paula Poundstone – These two were the last books I got before the ban began. They’re my final babies. I bought them when my husband and I went to go see the live recording of Wait Wait Don’t Tell Me! in Chicago. If you’re unfamiliar with the radio show, it’s a comedic news quiz that plays weekly on NPR. I love it. Sagal is the host, and Pounstone is my favorite contestant. The episode we saw recorded, Paula Poundstone wasn’t there. 😦 But! Peter Sagal was and he signed my book!! 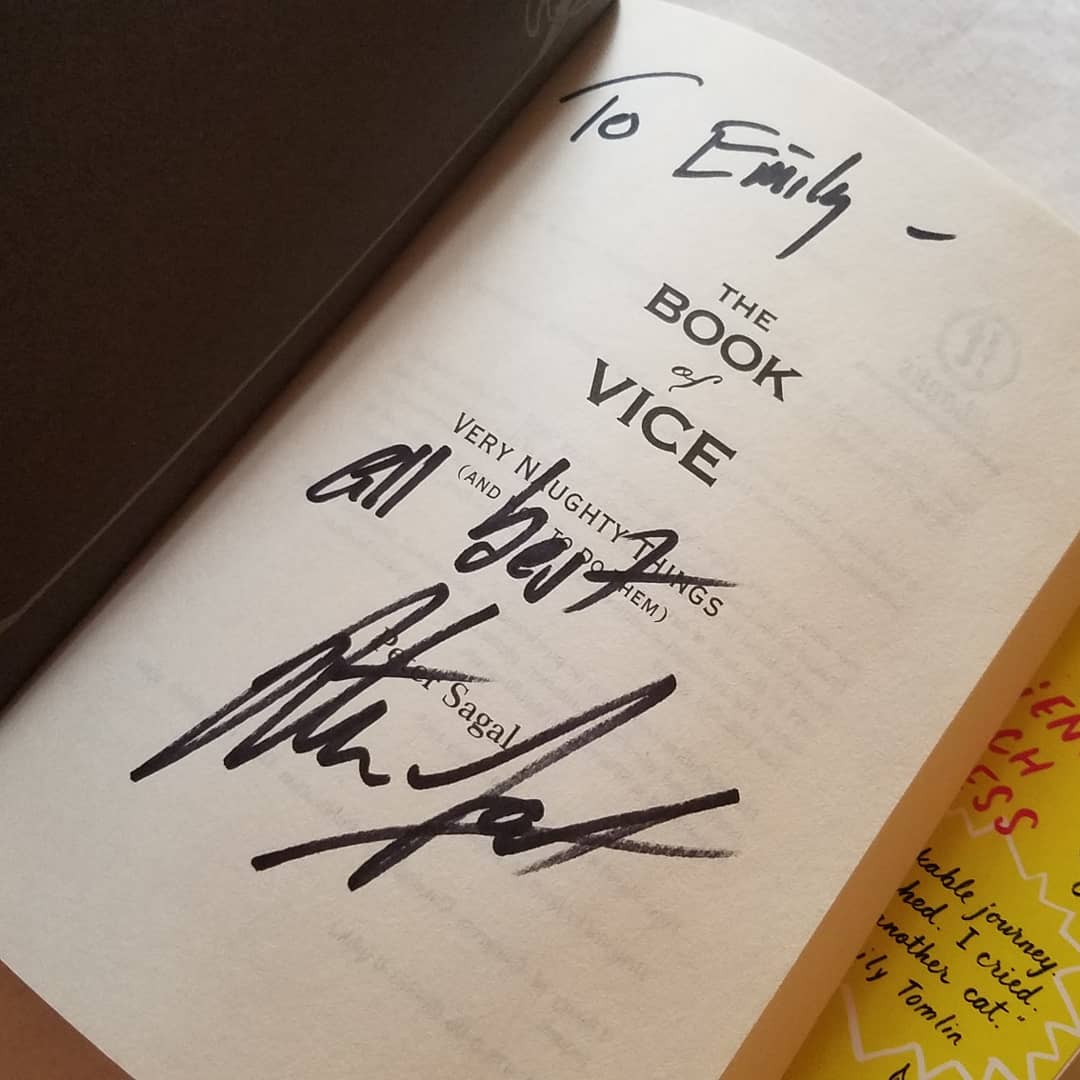 And that’s it! I definitely got a lot of books this summer, but it should even out by my ban this fall. So there’s that. If you’ve read any of these or are planning to, do let me know! Happy reading!